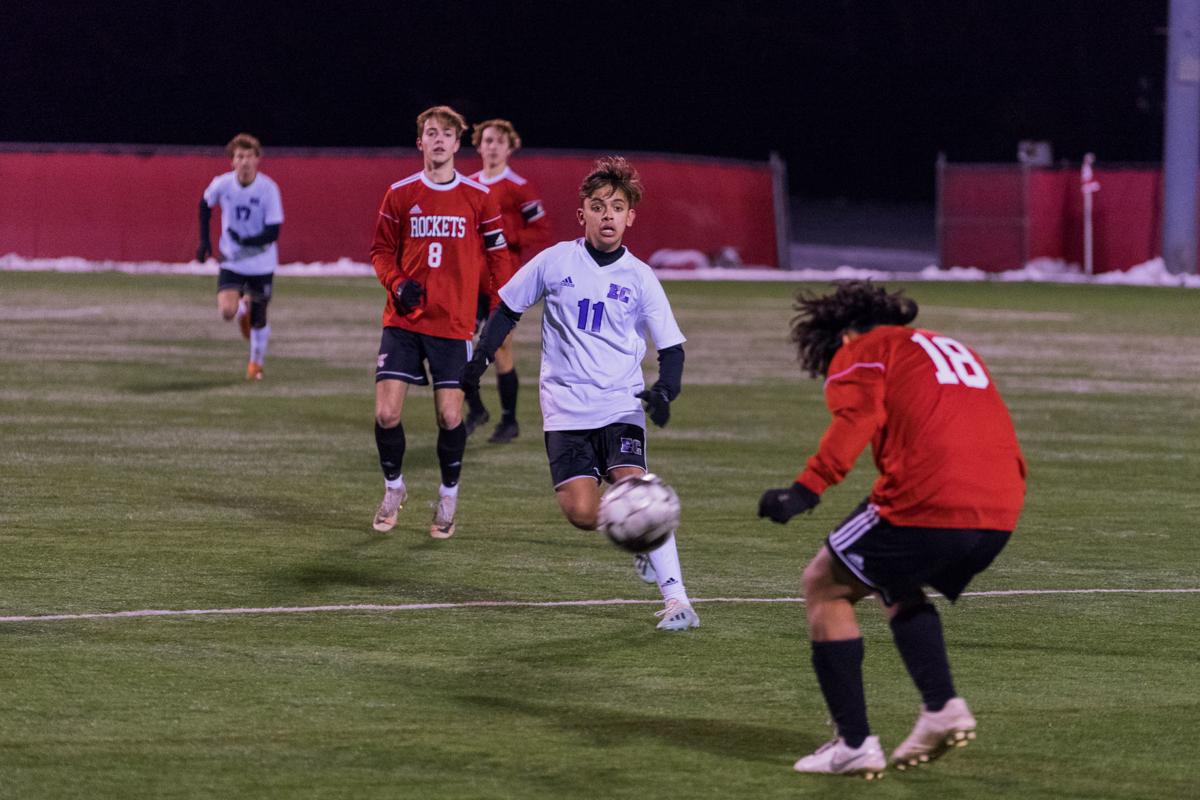 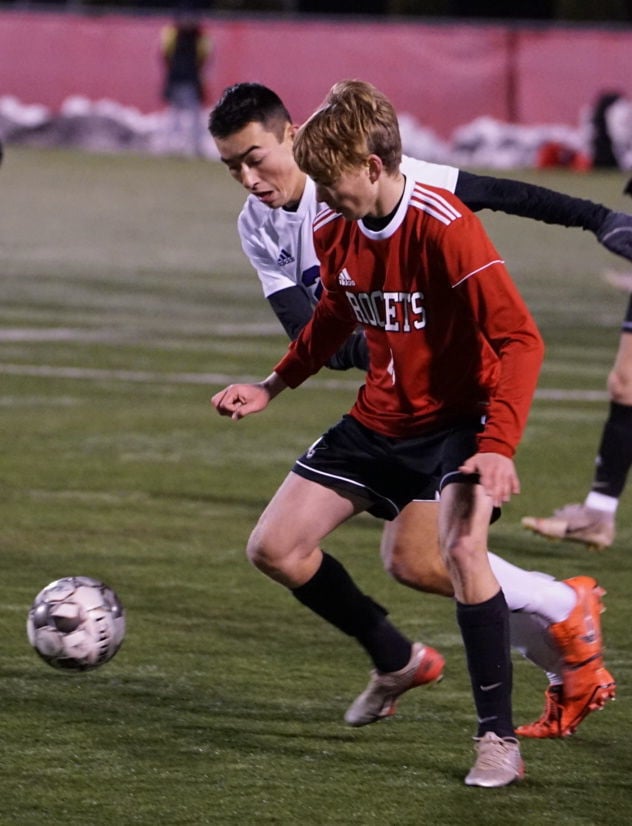 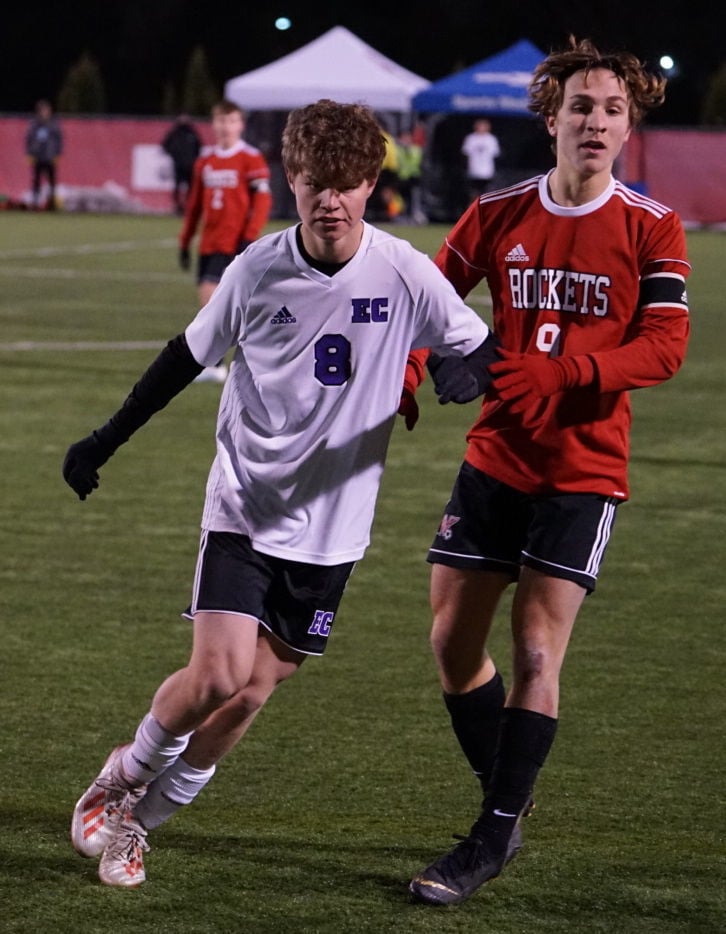 Eau Claire Memorial’s Will Jolley tries to get inside position on Neenah’s Andrew Nasr during the teams’ Division 1 state semifinal matchup Friday night at Uihlein Soccer Park in Milwaukee.

Eau Claire Memorial’s Will Jolley tries to get inside position on Neenah’s Andrew Nasr during the teams’ Division 1 state semifinal matchup Friday night at Uihlein Soccer Park in Milwaukee.

Second-seeded Memorial allowed a pair of goals to future Marquette Golden Eagle Thomas Priest and struggled to get serious looks on net of its own in a 4-1 Division 1 state semifinal loss to third-seeded Neenah.

The Old Abes, which were making their fifth appearance at state this decade, will have to wait at least one more season to earn their first appearance in the championship bout since 2002.

Priest put the Rockets ahead in the 28th minute, getting a run alone after a pass from Andrew Nasr. Memorial keeper Scott Knowlton went out to challenge the future DI player, but Priest was able to get around the senior keeper and shoot into the empty net.

Memorial was able to gain possession throughout, and even outshot Neenah 6-4 in the first half, but was limited when it came to serious opportunities.

Neenah defender Samuel Brazee picked an opportune time to score his first goal of the year in the 54th minute for the eventual game-winner. Thomas McDonald took a free kick from just outside the box to Knowlton’s right, getting a cross into prime position in front of the keeper. It sat at a handful of players’ feet before Brazee was able to get space and shoot.

“We knew Neenah was clinical with their finishing,” Kite said. “When you’re playing a team like that, small mistakes can lead to those turnovers. Before we knew it, we were 2-0 in the hole.”

Putting the Abes into serious desperation mode was another goal from Priest, which came in a similar fashion to the forward’s first tally. He was sent in alone in the 62nd thanks to a collision between Abe defenders and a pass from Nasr at the start of Memorial’s defensive third. Priest once again got around Knowlton and shot into an open net.

“We settled into it pretty well,” Neenah coach Brian Ross said. “They’re a good team. They’re very well-coached, but we were prepared for the match.”

Lu Shi Xiong ended his lone season on the Memorial side of town with a goal, saving the Abes from only their third shutout of the season in the 78th minute. Will Hartman sent a cross from the bench side of the field into the box and Xiong headed the ball into the net.

Neenah’s last tally came on an own goal to the Abes, as a shot redirected off a diving Jared Nunez.

The Old Abes entered state on a 13-game winning streak, with their only previous loss coming to reigning Division 2 champion Oregon. The Big Rivers champs concluded the season at 19-2-3 overall.

“It’s been a fantastic year for us,” Kite said. “Obviously an opportunity to play in the state semis is a great opportunity. It just wasn’t our night.”

The elimination of Memorial marked the end of local competition in Milwaukee. Rice Lake was eliminated Thursday with a 7-2 loss to McFarland in the Division 3 semifinals.

Kite lost out on a chance to play the school he coached prior to arriving in Eau Claire 15 years ago, Verona. Neenah will instead meet the top seed at 7 p.m. Saturday. The Wildcats, which suffered their only loss of the season to De Pere on Sept. 28, are making their first appearance at state.

“All nine of them have given everything they have,” Kite said. “It’s because of the seniors that we’re here today.”

There’s still optimism going forward with the return of four of the top seven scorers and a good chunk of the back line.

“I don’t like to think about next year, but only nine seniors in a squad of 25,” Kite said. “I’ve got 16 out here that will be coming back next year, and for them to be enjoying this experience, or even have this experience, should bode well for next season.”