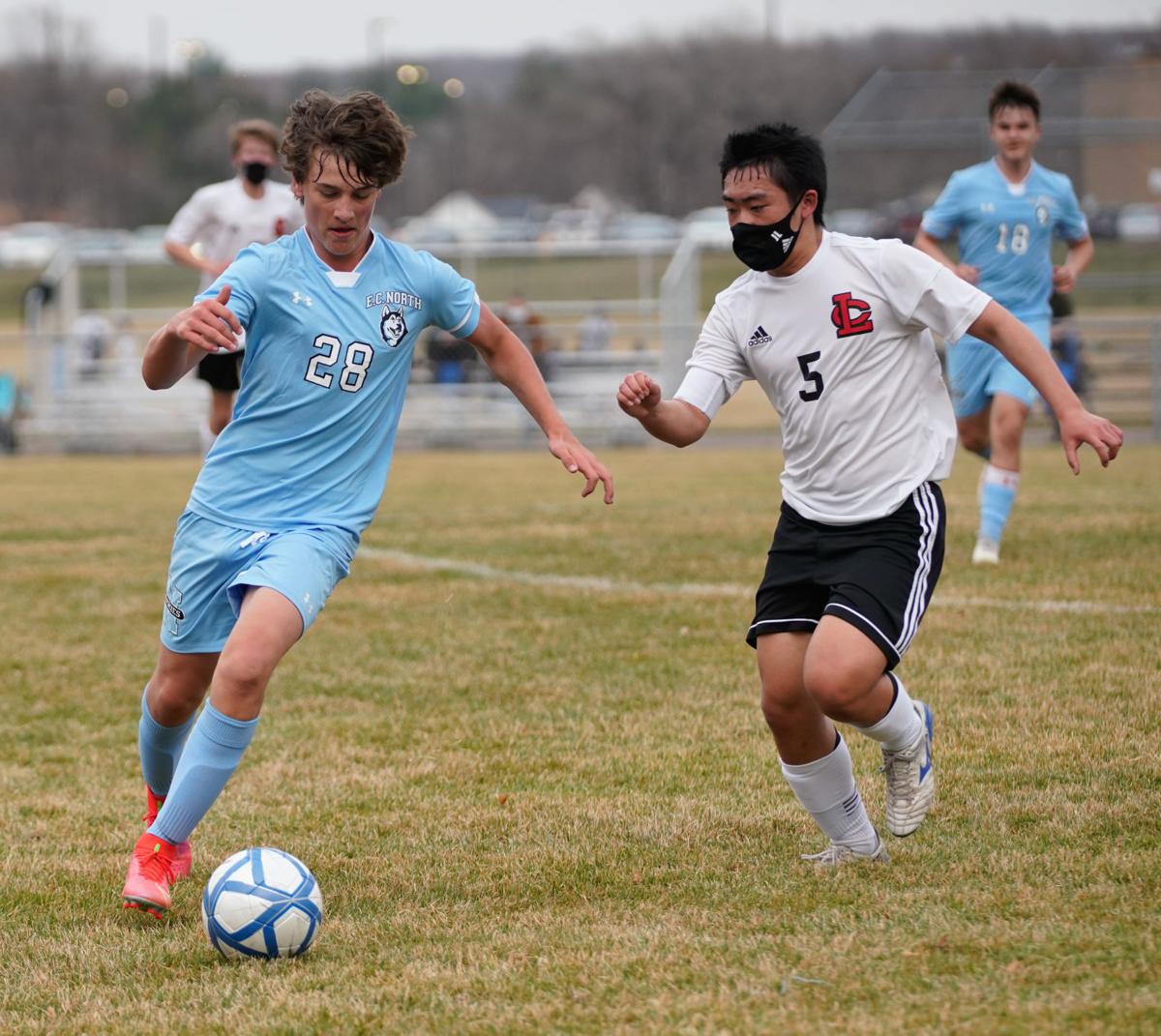 Eau Claire North’s Jack Ertz controls the ball while defended by La Crosse Central’s Joseph Lee during a game on Tuesday at North. 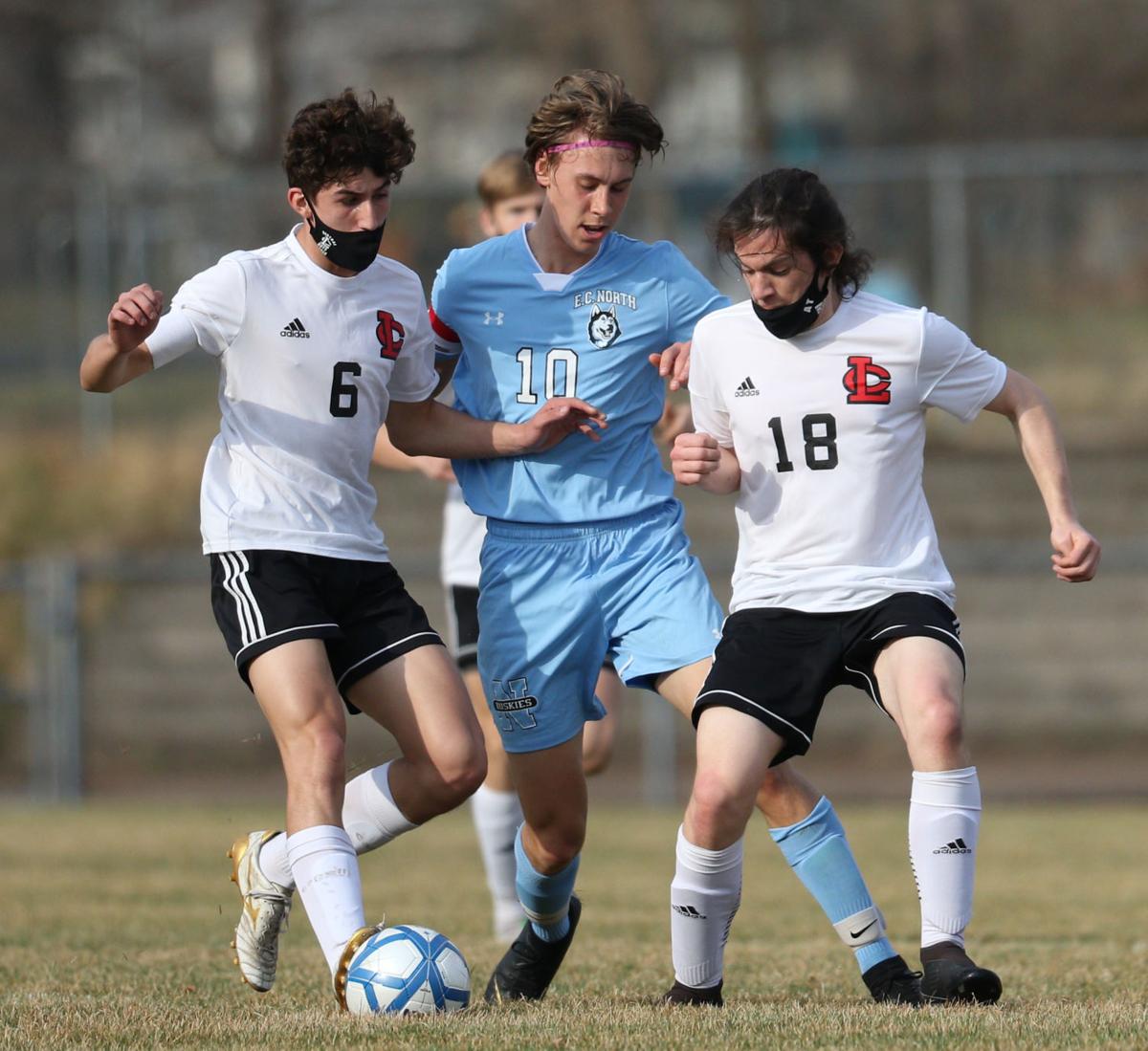 Eau Claire North's Connor Jol battles for the ball with La Crosse Central's Nicolas Bujan, left, and Carver Stenslien during a game on Tuesday at North.

Eau Claire North’s Jack Ertz controls the ball while defended by La Crosse Central’s Joseph Lee during a game on Tuesday at North.

Eau Claire North's Connor Jol battles for the ball with La Crosse Central's Nicolas Bujan, left, and Carver Stenslien during a game on Tuesday at North.

Tuesday’s Eau Claire North boys soccer game showed how valuable this alternative fall season could be for the Huskies.

Three of the team’s goals in a 4-4 draw with La Crosse Central were scored by underclassmen. Meanwhile, another underclassman, sophomore Caden Eberle, made six saves in net for the squad.

North, which has only four seniors and two juniors on its roster, is getting its youth major minutes in its belated campaign. Thankfully, after the Eau Claire Area School District opted to sit out the fall amid the coronavirus pandemic, they are being given an opportunity to make something of the year.

“I think that’s good for the future,” sophomore forward Jack Morosky said. “I think our senior year we’ll be able to play well. We have all this youth talent, and we’ll be able to use that, all this experience.”

Morosky was the final underclassman to find the back of the net Tuesday, helping North secure a draw despite falling down 3-0 early and 4-3 in the 57th minute. Parker Steffel found him with space in the box, helping the home squad complete the comeback with seven minutes to spare.

“I saw (both defenders) push up toward the ball,” Morosky said. “I just saw the space behind, so I took the advantage. I saw the through ball and just kicked one to the back of the net.”

The RiverHawks dominated play early on, scoring three times in the first 24 minutes of play. Joseph Lee put Central ahead in just the second minute, and two more tallies in the 23rd and 24th minutes gave the group a commanding advantage.

But North found its footing in the later stages of the first half, finally getting on the board in the 35th minute. Freshman Jack Ertz played a ball into the box that went over the outstretched hands of Central goalie Gavin Burrill, and North sophomore Aaron Seehafer was in good position to finish the play from behind the keeper.

“I saw that he kind of mistimed his jump a little bit,” Seehafer said. “I was able to capitalize on that.”

Both teams were forced to wait in sheds at halftime due to a lightning delay that extended the break to 40 minutes. But North’s young legs were able to stay fresh, and the Huskies kept the pressure on in the final 45 minutes.

Eliot Gannon, a member of the small group of North seniors, got his head on a corner kick from Louis Dalal-Haugen in the 50th minute to cut the deficit to one. Dalal-Haugen set up the equalizer as well, continuing the ball’s lateral move across the box to freshman Elliott Solberg on the left side. He made the most of the pass to tie the game 3-all in the 53rd.

“After Sparta, we found something that worked, and we didn’t do it in the first half here,” Albrecht said. “We talked about it. ... You saw a lot better ball movement (in the second half) and looking for the gaps.”

Lee looked to spoil the Huskies’ effort with a beautiful touch in the 57th minute. He took a deep shot from the middle third of the field, one that barely went over North goalie Caden Eberle and into the top of the net.

“He’s a very smart player because he saw our keeper out too far,” Albrecht said. “He’s just looking for that opportunity to beat somebody over the top.”

Lee had a chance to all but put the game away and secure a hat trick in the 83rd minute when a poor pass from the North corner sent him alone on the keeper. But the Huskies got lucky, with his shot going off both pipes of the goal and out. Less than a minute later, Morosky tied it.

North moved to 1-1-1 and hasn’t been beaten in two straight after opening with a tough loss to rival Eau Claire Memorial. With a short period of prep time before this alternative season began, and the fact that experience is limited, growth throughout the year will be key.

“There’s a lot of good energy,” Dalal-Haugen said. “Just working really hard, trying to keep up with the seniors and juniors and against the other teams.”

For many of these players, that growth together will extend out a few more years.