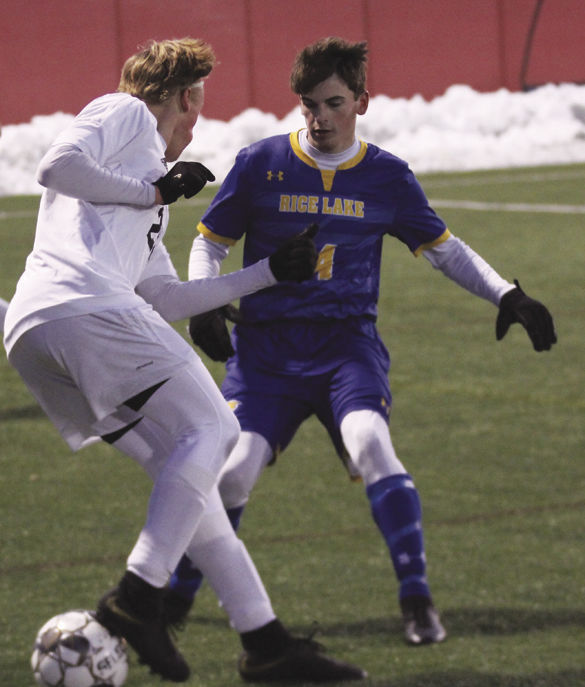 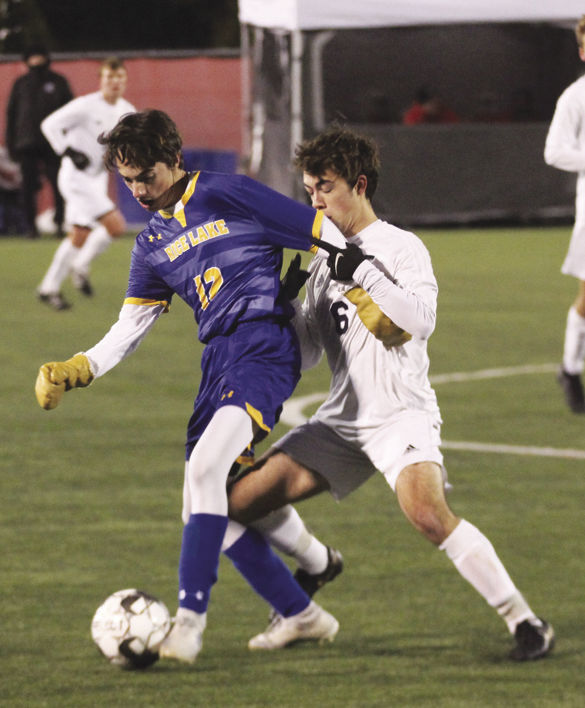 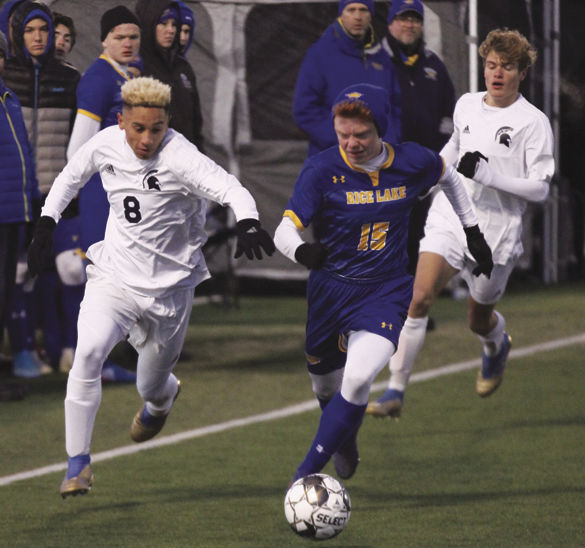 Defender Ethan Peterson, right, gets into a foot race for the ball with Mason Brown in Rice Lake's WIAA Division 3 boys soccer state semifinal match against McFarland on Thursday night.

Defender Ethan Peterson, right, gets into a foot race for the ball with Mason Brown in Rice Lake's WIAA Division 3 boys soccer state semifinal match against McFarland on Thursday night.

MILWAUKEE — Rice Lake boys soccer finally suffered its first loss to a Division 3 opponent on Thursday, more than two months after playing its first match of the season. Unfortunately for the Warriors, it came in a win-or-go-home situation at Uihlein Soccer Park.

The Warriors couldn’t stop top-seeded McFarland’s powerful duo of Ethan and Zach Nichols, falling 7-2 in the Division 3 state semifinals. The brothers combined for four goals and an assist on an evening where temperatures dropped into the low 20s.

“We played a good game, just have to defend better,” Rice Lake coach Shawn Gilbert said. “We left them too many open shots down deep and good teams make you pay.”

The Warriors scored twice in the final 10 minutes, but by then it was too little, too late.

Ethan Nichols opened the scoring in the 10th minute when a ball landed at his feet in the middle of the box, allowing him to turn around and fire a shot into the next.

He notched a second tally 25 minutes later, this time on an assisted play from his brother. Zach found Ethan on the right of the box, and Ethan dribbled a shot just inside the right bar despite Warriors goalie Zach Holmstrom being in decent position.

Zach Nichols scored his first and pushed the lead to three in the 48th minute. Vince Seils tapped along a pass inside the box to Zach, who redirected the ball into the left corner.

“Their attack, it was just dynamic, how they were working off of each other,” Rice Lake senior forward Ben Kemp said.

Jake Sampson notched the first goal that did not involve one of the Nichols in the 59th minute, recording only his second finish of the season. It marked the first time the Warriors allowed four or more goals all season to anyone but D1 foes Eau Claire Memorial and Hudson, and the final total of seven was the highest for any Rice Lake opponent this season.

McFarland didn’t slow up late, with Zach Nichols scoring off his left foot in the 68th minute and Grant Newcomer notching his third of the year in the 75th. While Newcomer did add to the offensive clinic, the play featured an impressive showing from Holmstrom in cage, who made two saves before McFarland capitalized.

The Spartans dominated control of the ball, rarely allowing Rice Lake offensive opportunities. Louis Larson saved the Warriors from a shutout in the 83rd, scoring unassisted. The senior tapped in a tally as multiple Warriors penetrated the McFarland box off a corner.

“We had a few people out of position because we just wanted all the seniors in,” Gilbert said. “We wanted the seniors to finish the season on the field. ... You just tip your hat to them. You know they’re disappointed, but to keep finishing for 90, that’s what we talk about.”

The Warriors’ leading scorer, Parker Bowman, also ended his high school career with a goal. He headed home a corner from Kemp in the 87th.

“It’s just a statement that we never give up,” midfielder Joey Schmitz said of the late goals.

Jack Bartzen wrapped up the McFarland scoring in the 89th. Holmstrom finished with six saves in cage for the Warriors.

This season was Rice Lake’s fourth trip to state and first since a run of three straight appearances from 2014 to 2016. The Warriors are still searching for their first state title.

“We’re excited about next season already,” Gilbert said. “We’ve got such a big crew coming back, our keeper coming back. We’ve got several starters coming back. Not all hope is lost because you lose in the semifinals for state.

“The last time we did this it was a three-year run. If we can do that again, that’s a good run.”

“We had a hell of a season, the best season in school history,” Kemp said. “For my senior class, most of us had already been down here our freshman year for state. It’s nice to have those memories, but now we’re up here, we’re the ones playing. It’s just going to be a fun time overall to remember.”

Bloomer native Thomas Rosenow was the lead referee for the match, leading a team of three.

McFarland, last year’s state runner-up, advances to play Shorewood at 1:30 p.m. Saturday in the D3 final. The Spartans will be playing for their first championship.