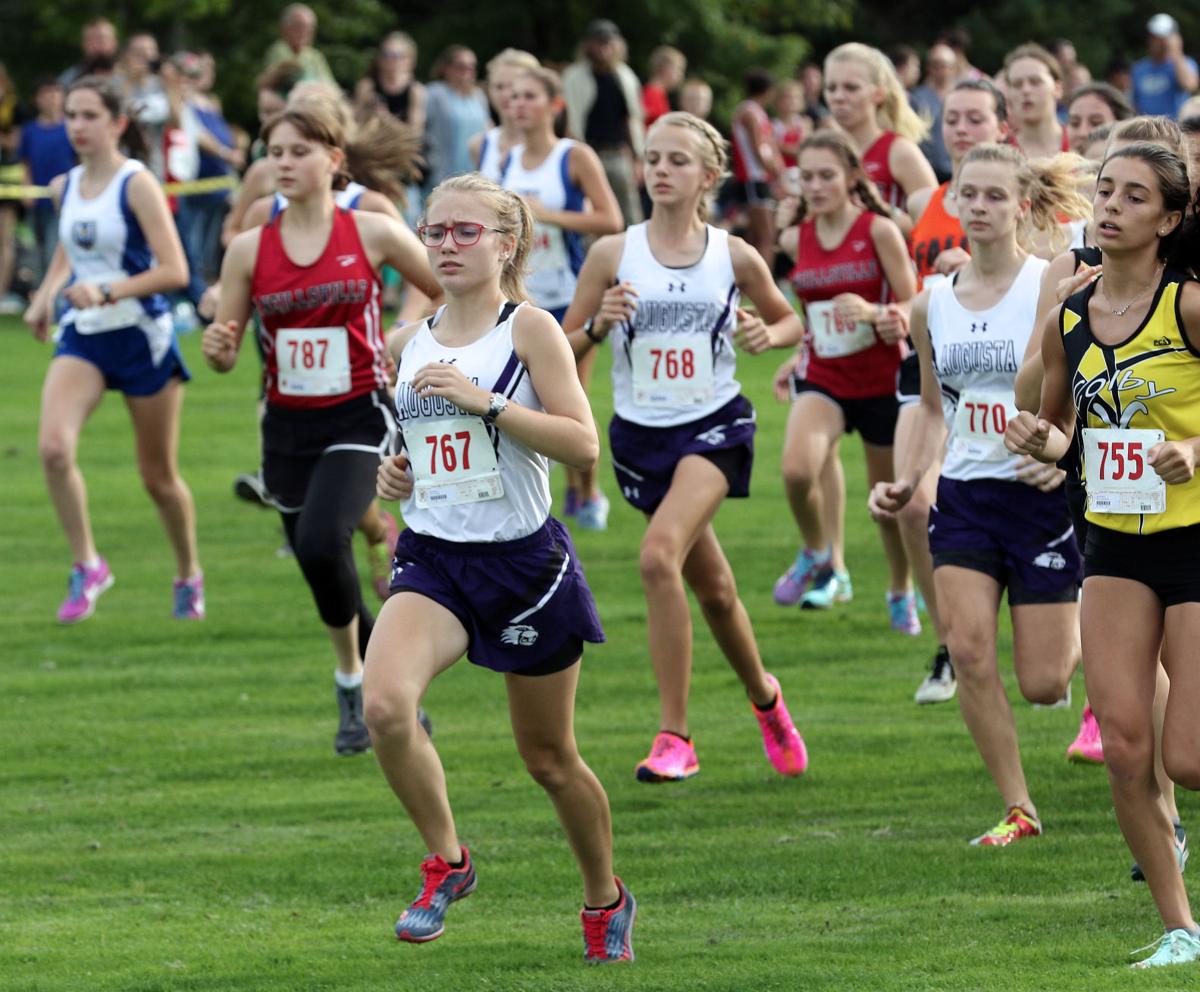 Augusta’s Bailey Peterson leads the pack from the starting line during the girls race at the 51st Cadott Cross Country Invite on Sept. 24, 2019 at Whispering Pines Golf Course. 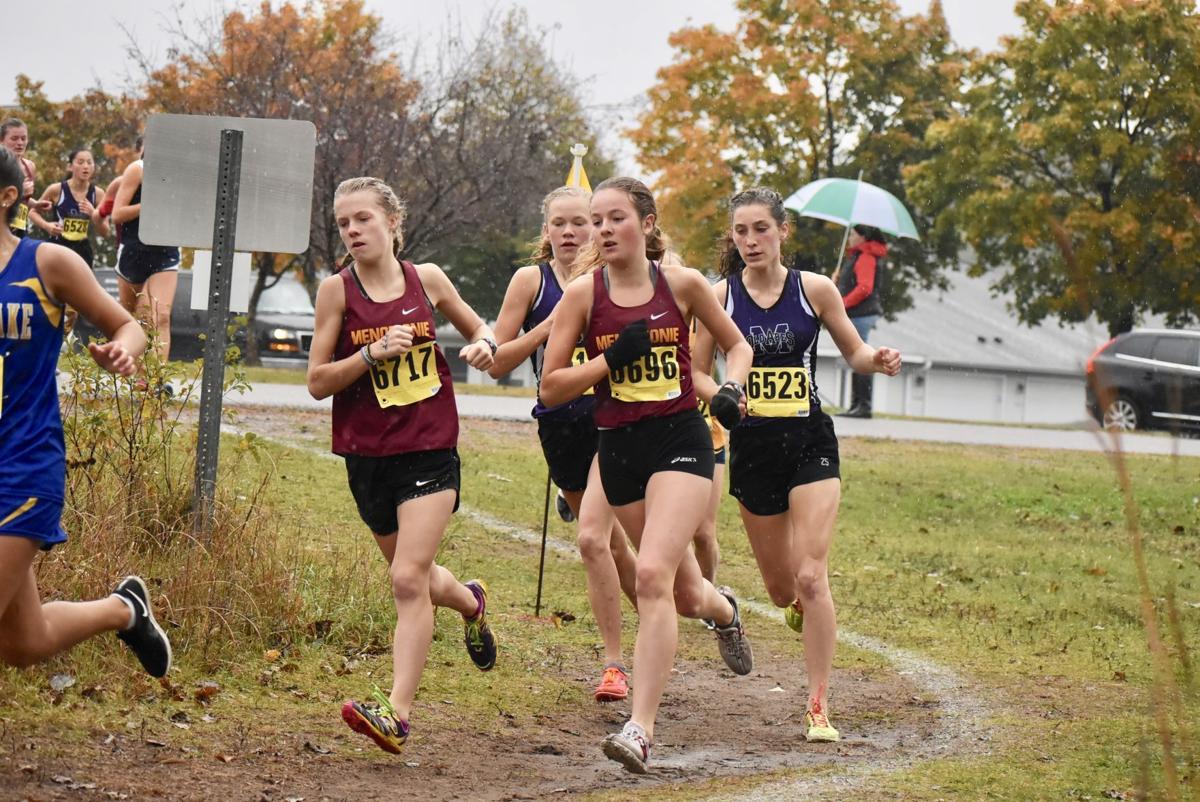 Menomonie’s Madeline Palmer (left) and Paige Anderson run alongside one another at the Big Rivers cross country championships on Oct. 19, 2019 at South Middle School.

Augusta’s Bailey Peterson leads the pack from the starting line during the girls race at the 51st Cadott Cross Country Invite on Sept. 24, 2019 at Whispering Pines Golf Course.

Menomonie’s Madeline Palmer (left) and Paige Anderson run alongside one another at the Big Rivers cross country championships on Oct. 19, 2019 at South Middle School.

Cross country will look different this year, sure. But compare it to some other sports, and it might seem closer to normal than first meets the eye.

As boys and girls high school teams gear up to begin practice on Monday, they know they’ll need to make adjustments to reduce the risks inherent in competing amid the coronavirus pandemic. At the end of the day though, running is still running.

“Cross country, even in these strange times, still kind of looks familiar,” Chippewa Falls boys and girls coach Roger Skifstad said. “You can still kind of run together, but they’re just spread out when they run. I think all in all, if we’re allowed to do it, we’re going to do it right.”

There are a handful of ways that cross country meets can be conducted to encourage social distancing. The starting line can be widened, allowing runners to spread out at the start of the race. The meet could be run in waves, with different groups of runners starting at different times. And masks can be worn at the beginning and end of runs, when social distancing is least achievable.

So while it might not be the norm, it’s still a race.

“I’m thankful cross country is kind of a low-risk sport, where it’s really easy to distance athletes out,” Regis boys and girls coach Jeremy Hardy said, “where you might not be able see that as much for other sports.”

Some conferences, like the Big Rivers, are planning to compete in a mostly conference-focused schedule. They’ll do so to limit travel and to remain in competition with the same groups of athletes from schools on a regular basis.

Others are currently still looking at playing out a semi-normal schedule.

Hardy said Regis’ schedule doesn’t look too much different than usual, although long-distance trips seem to be less likely now.

Skifstad said the plan is for Big Rivers runners to wear a mask at the start of the race, and then they can remove it when they reach a certain point on the course where distancing is more achievable. When they approach the finish line, the athletes would put the mask back on.

They’re also considering breaking up the races into smaller numbers. For instance, what would ordinarily be one JV race could be split in two.

The main component is keeping a healthy distance between athletes from other schools whenever possible.

“The idea is sort of like it would be in your home with your family, you don’t have to social distance from them necessarily,” Skifstad said. “You’re distancing from strangers. So there is some social distancing within our own team, but they’ll have been with each other a lot already. The thought is that we want to stay about eight feet away from another group.”

If a meet is conducted with a wave-start, the starting line can be even less congested. The race wouldn’t feature a dash to the finish among the leaders, as runners likely won’t know what time they’d need to beat to win, but it still gives everyone the opportunity to run.

“Your top two or three runners would start in the first wave, and then your next few from each team would go in the second wave and we’d kind of do it like that,” Hardy said. “It won’t be the mass starts that you would see beforehand. I think it’ll work out just fine, everybody still gets to run their race and hopefully they’ll still be able to do fairly well.”

The Big Rivers is looking to have two trial meets on Aug. 29, split regionally between its member schools. At South Middle School, Eau Claire Memorial would host North, Chippewa Falls and Rice Lake, and Menomonie would host a meet for the western schools: Hudson, River Falls and possibly New Richmond.

“We’d get a chance to practice the social distancing,” Skifstad said. “We’re kind of working through a lot of those logistics, but we think we can make it work.”

Skifstad said the Big Rivers is currently planning on having each school host a meet. Spectators would be allowed, but they would need to wear face coverings.

For the athletes, both Skifstad and Hardy said it’s mostly an exciting time for them. They’ve been waiting to be able to compete for a long time.

“I think they’re really excited,” Hardy said. “A lot of them were part of the track season that got canceled (in the spring), so they’re pretty excited to just kind of be competing in something again. I’m glad that as a state, Wisconsin seems to be figuring out how to get students back to competing while being safe at the same time.”