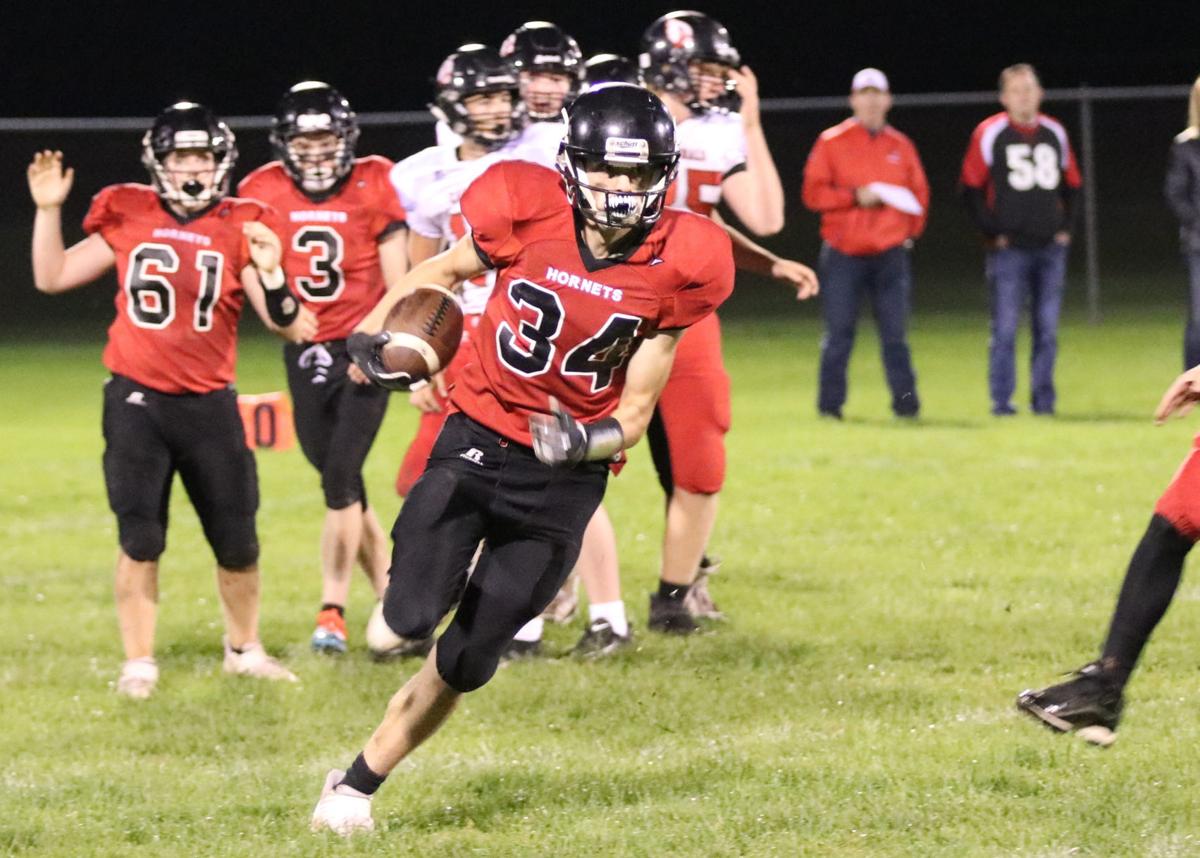 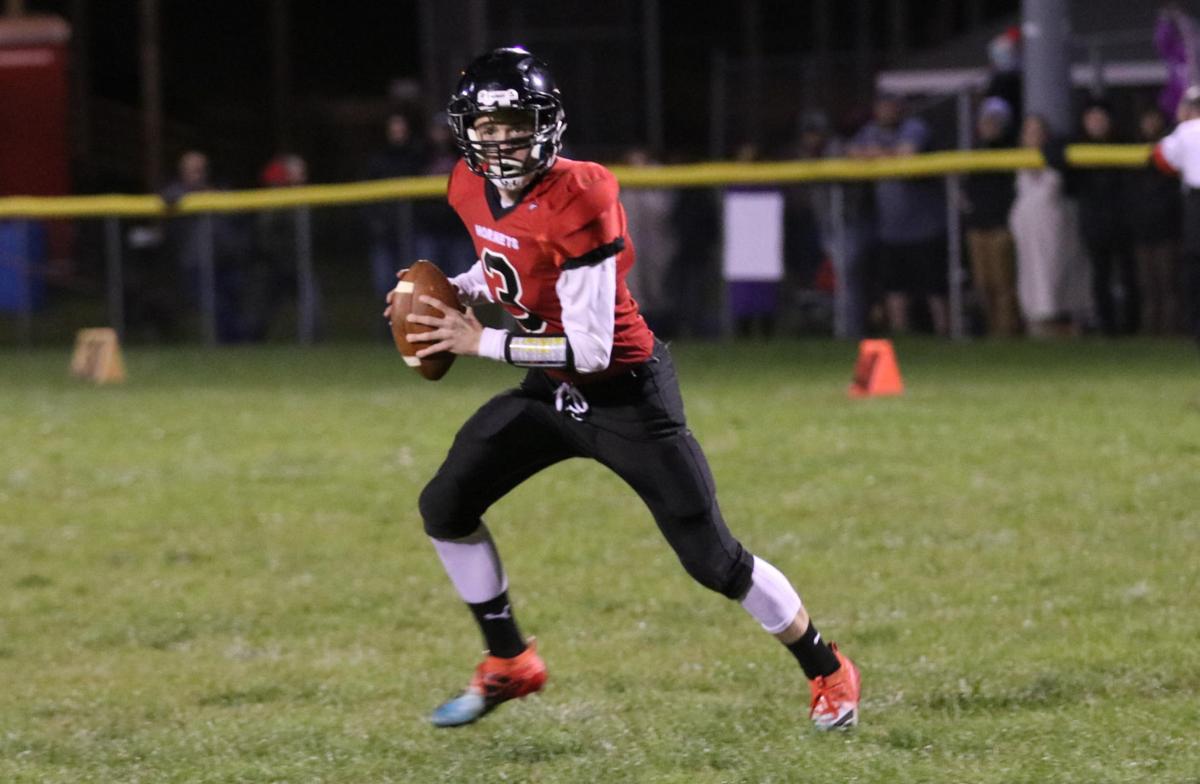 Alma Center Lincoln quarterback Jack Anderson moves in the pocket during a game against Prairie Farm on Oct. 18, 2019 in Alma Center. 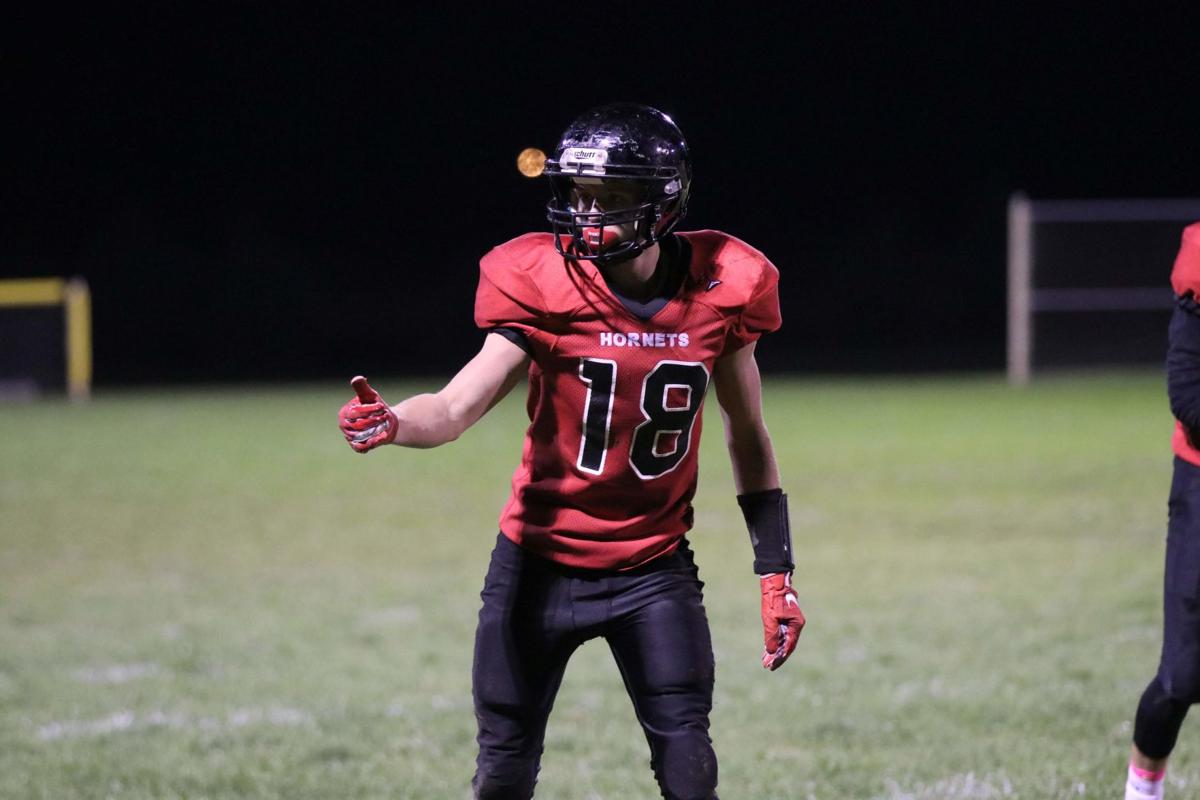 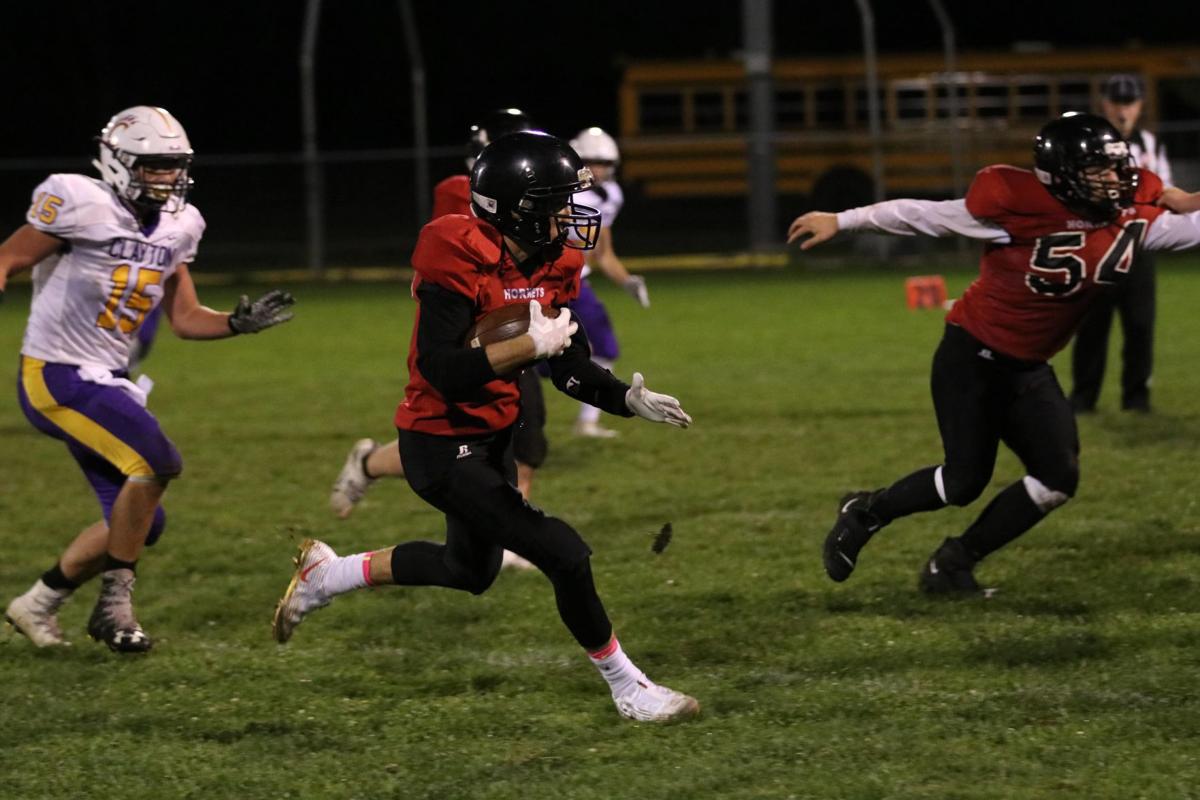 Alma Center Lincoln’s Justin Rowekamp runs with the ball during a game against Clayton on Sept. 13, 2019 in Alma Center.

Alma Center Lincoln quarterback Jack Anderson moves in the pocket during a game against Prairie Farm on Oct. 18, 2019 in Alma Center.

Alma Center Lincoln’s Justin Rowekamp runs with the ball during a game against Clayton on Sept. 13, 2019 in Alma Center.

When Jeremy Hanson took over Alma Center Lincoln football last year, he was technically the seniors’ seventh coach in four years. And Hanson, the school district’s athletic director, only accepted the head coaching duties at first because there were no other options.

“The trials have been unbelievable,” Hanson said of ACL football. “I’ve only been there two years and I have not seen a football program go through the turmoil that these kids have endured.”

Instability became the norm in the Hornets football program. There’s been a different coach on the sidelines for Alma Center Lincoln games each of the last four years, and Hanson said three more were hired prior to last year before backing out. One had even already met the players.

That’s before mentioning the issue with numbers, which the Hornets have struggled with even while fielding an eight-man program. In a farming community hovering around 500 people, football often conflicts with the popular Jackson County Fair and duties at home. Just two years ago, Alma Center Lincoln didn’t have enough players come out, so it forfeited the varsity season and just played games as a JV program.

Yet, through it all, Alma Center Lincoln found success. The Hornets went 3-3 in the Lakeland-8 South last fall, helping the school earn a spot in the football postseason for only the fourth time in program history.

“It was a stunning turnaround for these kids,” Hanson said. “Justin Rowekamp … was the only kid we had that had played four years as a senior. Other than that, we were out there with a bunch of first-year kids.”

And now, a year after the Hornets wondered if they even had enough kids to field a team, there are suddenly expectations. WisSports ranked Alma Center Lincoln 11th among eight-man programs in its spring ratings released last month.

Hanson, who previously spent time coaching at Blair-Taylor, was told last summer he couldn’t coach after undergoing a double hernia surgery. But after Alma Center Lincoln struck out on candidates in the offseason, he knew he needed to take command.

He began putting together a last-minute staff, convincing a parent and an elementary physical education teacher to come on as assistants. A week before the season, Hanson called up former Cochrane-Fountain City coach Steve Lyga to ask if he’d come out of retirement to help.

“Literally the Saturday and Sunday before practice started on Monday we were drawing up plays on a marker board, trying to create an offense,” Hanson said.

As for who the staff was working with, Hanson told his players they wouldn’t play unless there were at least 16 kids. The roster was hovering around that number when one of Alma Center Lincoln’s top basketball players happened to come by the school during practice.

Ethan Breheim, who was coming off a first-team All-Dairyland selection on the hardwood, stopped by the high school to pick up his basketball uniform for senior pictures. It turned out to be an eventful decision since a bit of petty theft by his future teammates changed the course of his senior year.

“Ethan, we all wanted him to come out for an extra guy,” said Austin Calkins, a wide receiver and defensive back for the team last season. “We took his car keys and said if he didn’t practice with us, he wasn’t going home.”

He stuck around for a film session, then followed the team out on the field.

“The next day we were handing out jerseys and he was standing in line asking for a jersey,” Calkins said. “We finally got him to go out.”

Hanson credits Calkins and fellow senior Rowekamp for making sure the team had enough players to stay viable throughout the season. The two went door-to-door trying to drum up interest and drove teammates to and from practice.

“There were a few mornings where I would get a text from one of those two telling me they were going to be late because they were sitting in a teammate’s house making sure they were getting up to come to practice and it was taking longer than they thought it was going to,” Hanson said.

Adding a 6-foot-5 wideout in Breheim to the mix was a game-changer and played into Hanson’s belief that the team’s best path to success was going to the air. It was an uncommon approach for eight-man football and put a fair bit of pressure on quarterback Jack Anderson, who didn’t exactly volunteer to be the signal-caller right away out of fear of letting his teammates down.

“I did not want to be quarterback,” Anderson said. “We were going through the plays and stuff and (Hanson) was quizzing everyone. He asked me what position this was and I said, ‘quarterback,’ and he goes, ‘You better know it, cause that’s going to be you this year.’”

Teaching was the focus for the staff early while dealing with so many players new to the game. Even the coaches had to do their fair share of brushing up on the rules, which are different in eight-man than traditional 11-man football. Hanson learned the hard way that centers are eligible on passing plays when a foe scored a deep touchdown that way.

Confidence grew as the Hornets hung around in a trio of scrimmages, but Hanson was still unsure what he had when the team traveled to Northwood for the first game of the season. He said they had just six plays and six formations in the playbook, and before the game he asked the referee crew to coach his players through the rules if they were called for a penalty.

Alma Center Lincoln scored on the first play, a 70-yard passing play from Anderson to Rowekamp, but didn’t quite have the guns to compete in a 61-34 defeat.

A week later, everything clicked. Anderson threw for 220 yards and five touchdowns, with two each going to Rowekamp and Trent Tonola, in a 60-26 victory against Mercer/Butternut.

“I felt that was kind of the turning point,” Calkins said. “We can be something. We are something.”

Postseason hopes were low at Alma Center Lincoln following a three-game losing streak that stretched from the end of September to early October. After a 42-8 loss to Shell Lake on Oct. 4, the Hornets needed to win their final two games of the season to even make the criteria for a playoff program.

Even if they did string together a pair of Ws, they’d have to rely on help too. Hanson read over the playoff scenario sheet the WIAA sends out and discovered how complicated the Hornets’ potential path to the postseason would be.

Alma Center Lincoln won the penultimate regular season game of the season, earning a comeback 42-38 victory against Bruce, but the odds were still against the team when it welcomed Prairie Farm for the regular season finale.

“Before the last game, (Hanson) told us there’s a very slim chance, if the stars aligned,” Anderson said.

The Hornets did their part, knocking off Prairie Farm in a high-scoring 50-48 contest, but still said their goodbyes in the locker room before getting the surprising news.

“My phone was blowing up all night long,” Hanson said. “We went to school Monday and we went to practice, I thought I had to pinch them. It was unbelievable excitement.”

Alma Center Lincoln’s first postseason game since 2010 didn’t go as hoped for the program, bringing a 55-26 loss to Belmont, but no one expected they’d be there to begin with.

“We all wanted to win, but we weren’t expecting anything big,” Calkins said. “We just wanted to play ball.”

Hanson was able to get in one signup sheet for football before the coronavirus pandemic sent students home for the rest of the year. Twenty-four kids signed up, which would make for the largest roster Alma Center Lincoln has had in four or five years.

There’s been increased interest at the youth levels as well, with Hanson noticing heightened enthusiasm from the middle school students. He’s also heard the flag football participation was up in the area last year.

“I think it was the offense,” Hanson said. “We’re not the greatest show on turf like the Rams were with Kurt Warner and Marshall Faulk, but we can throw the ball against a lot of people and it kept us in virtually every game. I think the kids saw that and they want to play that style of football.”

While Hanson originally planned to coach the Hornets for one season, he’ll be back on the sidelines this fall. His biggest holdup was getting the chance to watch his son play middle school football in the Osseo-Fairchild School District, but the staff worked out a system where he’ll be able to go watch games on Tuesdays while Lyga runs Hornets practice.

“I had a blast,” Hanson said. “Honestly, it was the best season of my coaching career.”

Finally, some stability. But, of course, it comes at a very unstable time, with even the status of the football season itself up in the air due to COVID-19. If any group is prepared to deal with uncertainty, it’s this one.

Despite WisSports’ positive assessment, there are holes to fill. Offensively, Alma Center Lincoln needs to replace its top three receivers, Rowekamp, Calkins and Breheim. The trio accounted for 2,252 yards through the air.

And Hanson isn’t ready to fully feel comfortable yet. He said he’s still worried about numbers and is hoping the Hornets don’t end up being the one ranked team that isn’t even able to field a squad.

Among the positives is the return of Anderson, who grew to enjoy his quarterback role despite his initial trepidation. The rising senior led the state in passing yards with 2,630 and touchdowns with 38. He was one of five finalists for WisSports’ eight-man player of the year.

He’s aware of the expectations and is focused on keeping the reputation of Alma Center Lincoln football positive.

“It makes me want to work harder,” Anderson said. “We lost a lot of people, and it would be really easy to be complacent. … But you don’t want to let those expectations down. We started building something.”