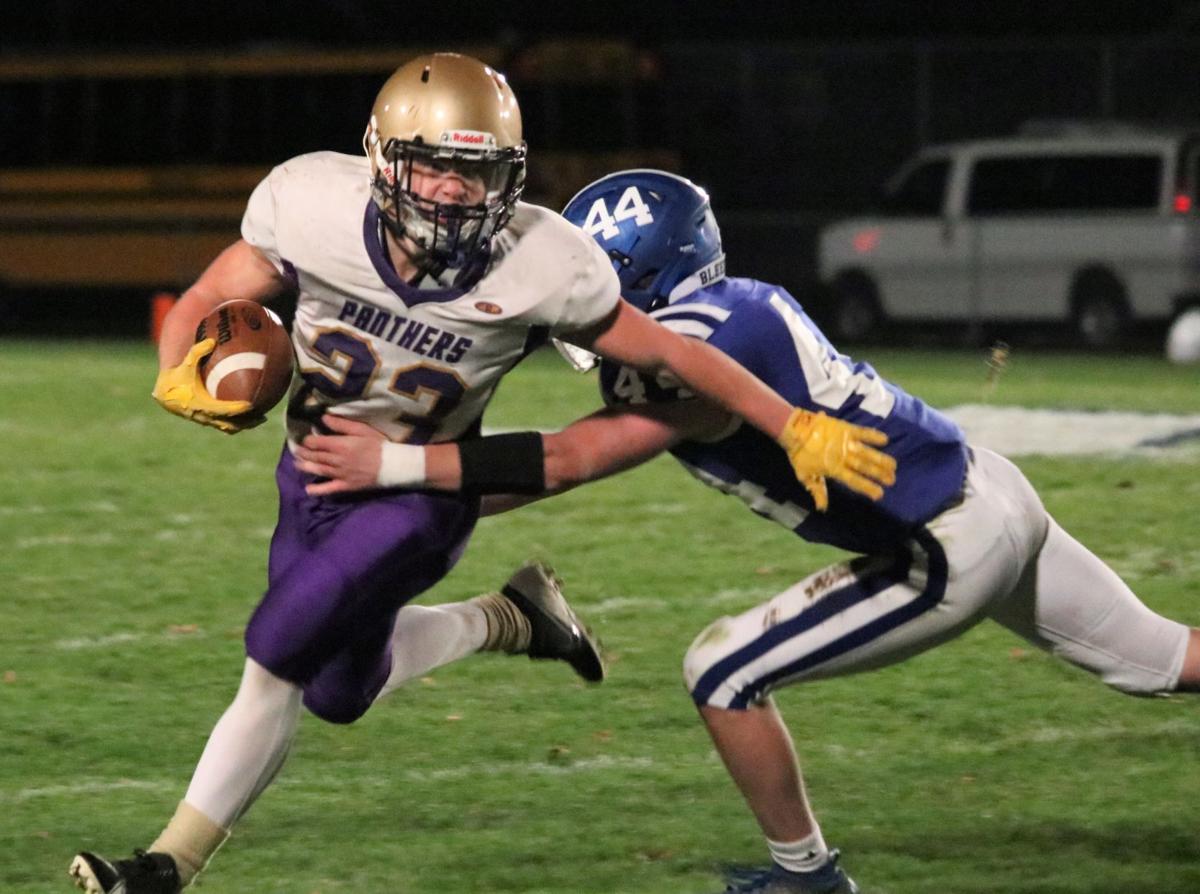 Durand’s Simon Bauer shakes off a tackle from Mondovi’s Alan George during a football game on Friday in Mondovi. 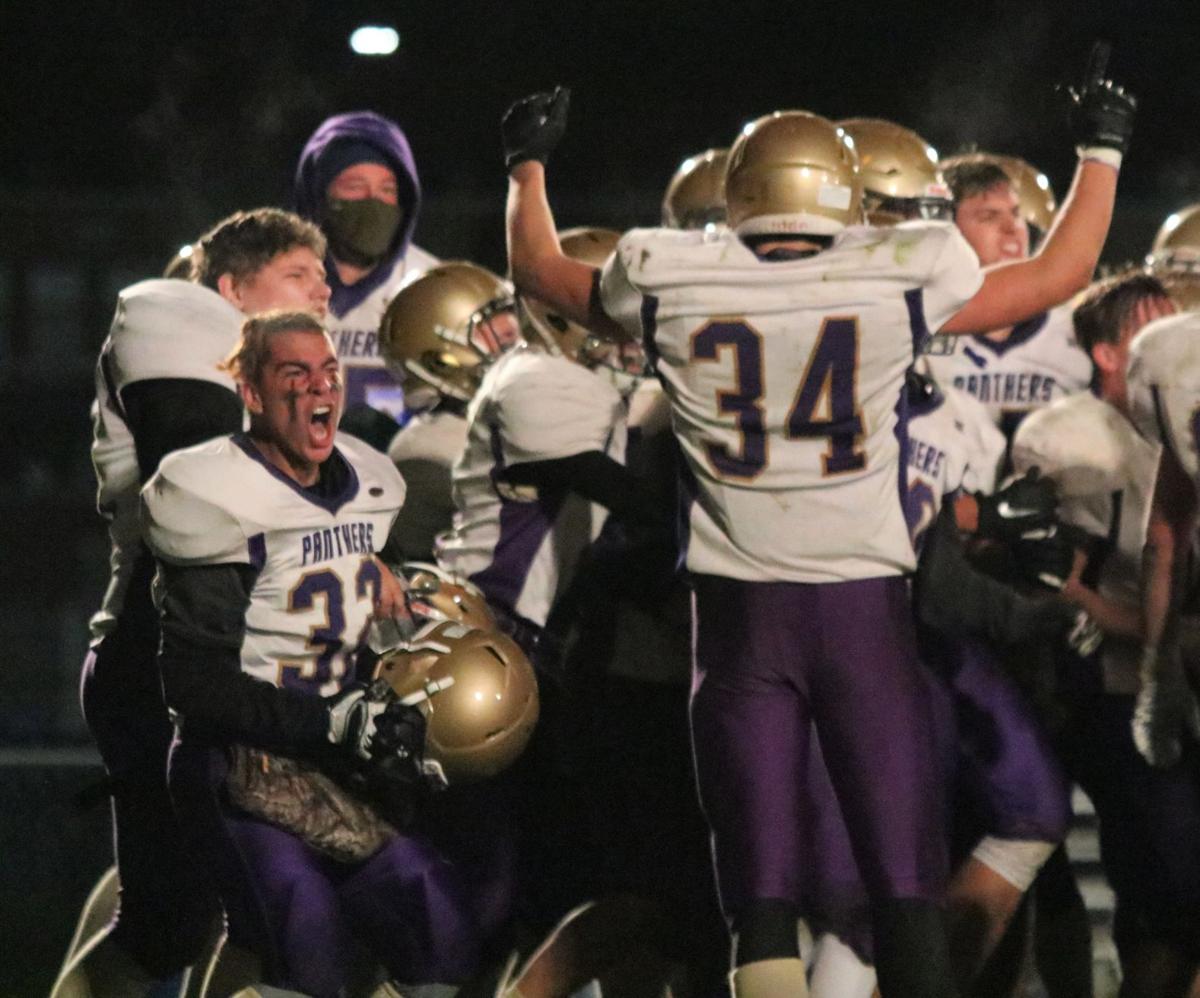 The Durand football team celebrates following an overtime win over Mondovi on Friday in Mondovi. 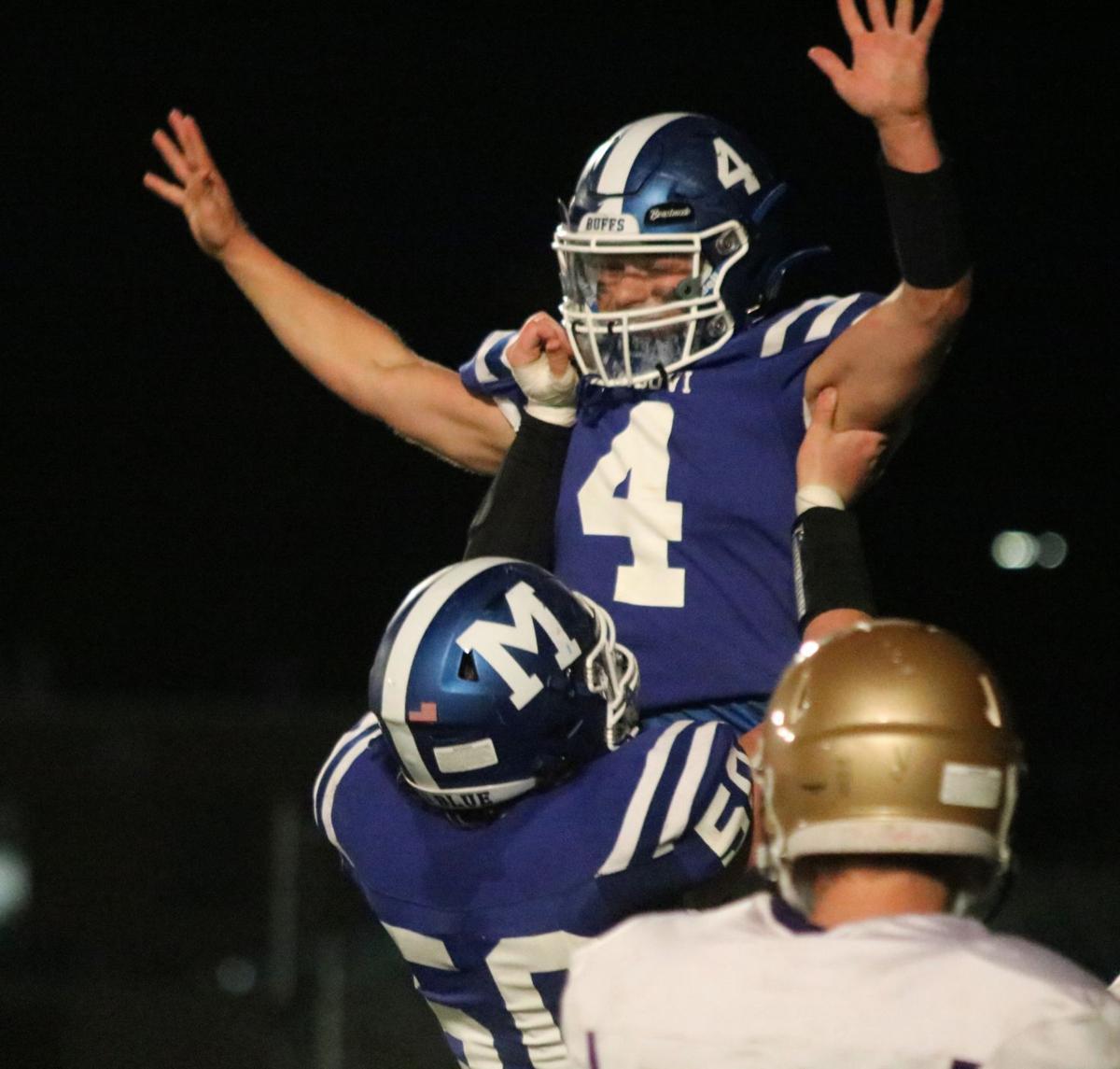 Mondovi's Cade Brenner (4) celebrates with Jacob Zacharias (50) after scoring a touchdown during a football game against Durand on Friday in Mondovi.

Durand’s Simon Bauer shakes off a tackle from Mondovi’s Alan George during a football game on Friday in Mondovi.

The Durand football team celebrates following an overtime win over Mondovi on Friday in Mondovi.

Mondovi's Cade Brenner (4) celebrates with Jacob Zacharias (50) after scoring a touchdown during a football game against Durand on Friday in Mondovi.

A gritty Mondovi team offered a different type of challenge. But even against a more evenly-matched opponent, the Panthers came out on top.

Simon Bauer scored five touchdowns and the Durand defense made a fourth down stop at the 2-yard line in overtime for a 33-27 win over the Buffaloes on Friday.

"This was rivalry week, and this one meant a lot," Bauer said. "We wanted this one bad, and we got it. We toughed through it."

The Panthers needed to weather a storm to do it. Mondovi never quit despite trailing by 14 points in the first half, and rallied to force overtime on Tanner Marsh's three-yard touchdown run with 1:08 left in the game.

Durand started with the ball in the extra period and made the most of it, with Bauer's one-yard touchdown run capping a quick five-play march into the end zone.

Down to its final chance, Mondovi carried the ball down to the Panthers' 7-yard line before facing a fourth down. The Buffaloes needed to get to the 1-yard line to get a fresh set of downs, but Durand stopped Cade Brenner's run at the 2 to end the game.

"That was a great game by both teams," Durand coach Rod Rosemeyer said. "I give Mondovi a lot of credit, they battled. That was just two good football teams battling it out, and luckily we came out ahead."

It was about as close as could be. The officials needed to bring the chains out to measure the final run of the game, which came up about a foot short.

"That was great," Bauer said. "All the hard work we put in during the game paid off there."

Durand improved to 4-0 this season with the victory. But after three big wins to start the year, Friday's was by far their toughest test yet.

The Panthers started strong, controlling play in the first half and getting Bauer into the end zone twice to build a 14-0 lead. But the Buffaloes got some much-needed momentum when Brenner threw a 14-yard touchdown pass to Jarod Falkner on the final play of the first half to cut into the lead.

"We came out and kind of got punched in the mouth," Mondovi coach Craig Loscheider said. "I felt like Durand was more ready to play than we were, and to me that's a reflection of coaching. So I'm not disappointed in my kids, I thought we fought hard and I was proud of that. I have a lot of things I'd do differently this week, and that's kind of what I'm frustrated with."

But for the most part, whenever the Buffaloes needed to make a play in regulation, they did. It started with the touchdown pass at the end of the second quarter, and continued in the second half.

Marsh scored his first touchdown of the game midway through the third quarter, capping a 10-play scoring drive to pull Mondovi to within two points of the lead.

Durand answered when Joey Biesterveld threw a 16-yard touchdown pass to Bauer in the final minute of the third quarter, but Mondovi got a 14-yard touchdown run from Brenner on its next drive to respond again.

"We put some drives together to give us a chance to win the game ultimately, but just came up a couple of inches short," Loscheider said.

Bauer's third rushing touchdown of the night put Durand up 27-19 with 3:51 to go in regulation, leaving Mondovi with little time to complete its comeback.

But one more time, the Buffaloes had an answer.

Mondovi embarked on a 78-yard, 11-play scoring drive finished by Marsh's three-yard run to cut the lead to 27-25. Brenner ran the two-point conversion up the middle to tie the game and force overtime.

"They scored at the end of regulation and momentum was kind of on their side again, so I was really pleased with the way we responded from that adversity," Rosemeyer said. "We put a nice drive together in overtime, and had a great defensive stand at the end."

Bauer, a junior, ran for 144 yards on 29 attempts for the Panthers. He scored four times on the ground and once in the receiving game.

"It's a credit to him and his team that they were able to do that, because we have kids that are pretty good football players and take this pretty seriously, and (Durand) was able to create holes and find room for him," Loscheider said. "He was tough, for sure."

Marsh ran for 94 yards and two touchdowns on 33 carries. Falkner had nine catches for 120 yards.

Durand's win streak is at four now, and the Panthers remain tied with Regis for first place in the Cloverbelt Conference. And now they've passed one of the major tests on their schedule.

"We knew Mondovi was a quality team, and we came in knowing we'd have to play better than we have because the competition was only going to get better," Rosemeyer said. "The guys were mentally ready. We had a good focus tonight, and I'm just pleased with the effort of all 40 guys."