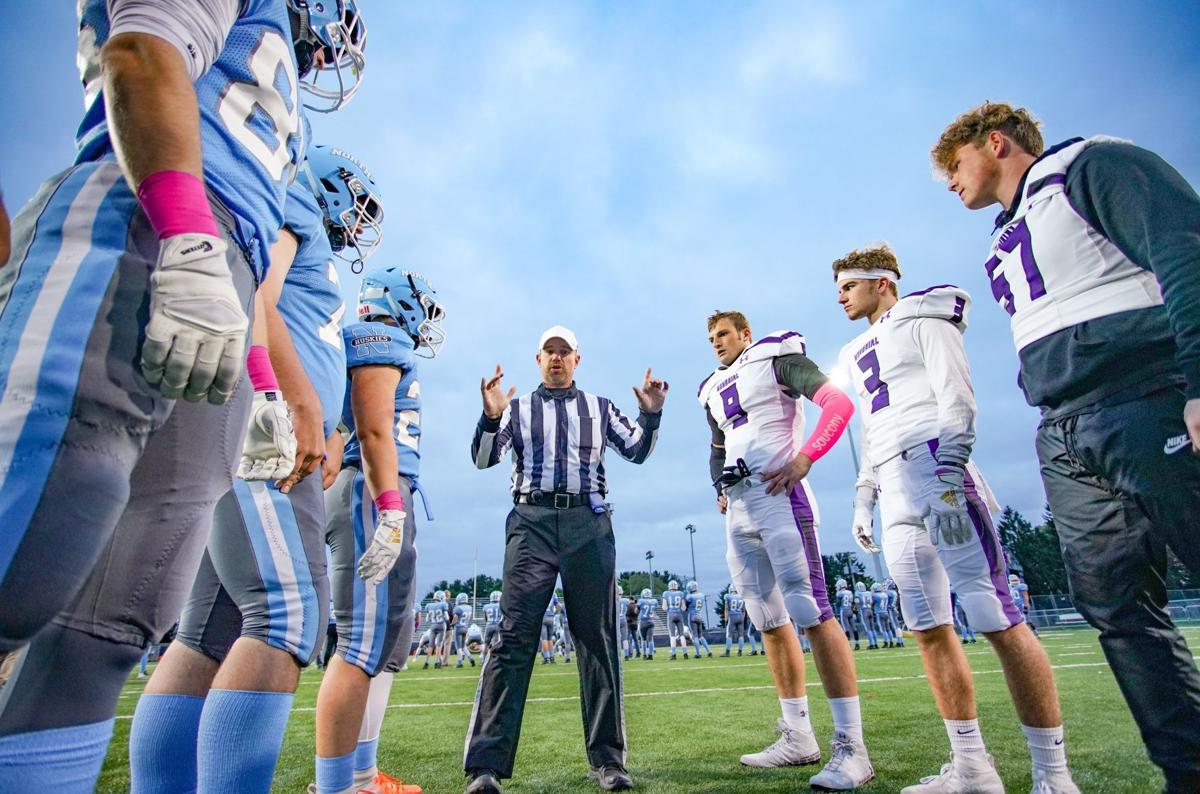 Members of the Eau Claire North and Eau Claire Memorial football teams meet for the coin flip during the teams’ matchup Friday, Oct. 4, 2019 at Carson Park. 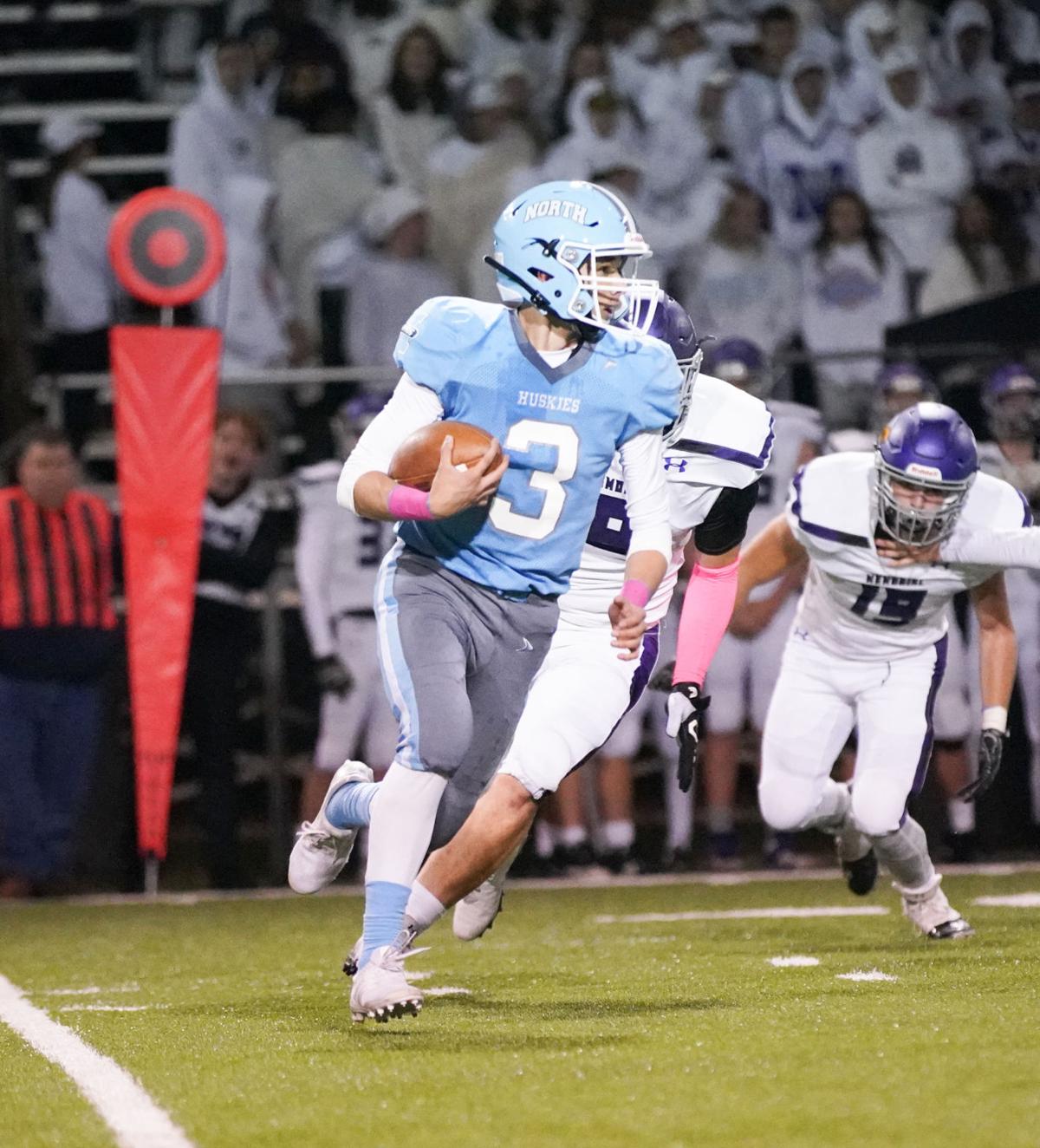 Members of the Eau Claire North and Eau Claire Memorial football teams meet for the coin flip during the teams’ matchup Friday, Oct. 4, 2019 at Carson Park.

Eau Claire North football coach Andy Jarzynski starts his hour and a half virtual meeting with his players with a discussion on the program’s culture. Then he turns things over to his special teams coach before players break off into position groups for offensive and defensive meetings via the Hudl video app.

The Huskies’ week of summer work was supposed to feature three and a half hour practices out on the field. Not this year.

While some other teams in the area have opted to put on the pads, both Eau Claire North and Eau Claire Memorial football are utilizing their WIAA-allotted summer contact days this week through virtual means. Both head coaches, Jarzynski at North and Mike Sinz at Memorial, said it was a collaborative decision between each coaching staff and their respective athletic director.

With kids missing out on even more time on the athletic field, the choice required serious discussion.

“We think the risk was much higher than any reward for this,” Sinz said.

Jarzynski said North originally formulated an in-person plan that included the staff’s 14 coaches working with a pod of 10 kids each, but that changed with further assessment by the staff and athletic director Mike Pernsteiner.

“We did a little bit more analysis of it, and we thought, ‘Well, you’ve got to think more than short term,’” Jarzynski said. “Even with the proper screening beforehand and the proper data tracking, if somebody who may be asymptomatic would end up being in one of those pods, we just couldn’t tell what the impact was going to ultimately be on the likelihood of us being able to have any sort of a season.”

Sinz echoed that sentiment. The goal is to enter the scheduled start of the year with no players dealing with COVID-19.

So both schools opted for the virtual route, which obviously has its drawbacks. Coaching staffs can detail the Xs and Os and discuss the pillars of their program, but there’s no opportunity to build muscle memory.

“A fraction of our kids learn best from this lecture and video stuff,” Jarzynski said. “But the vast majority of athletics in general is a bodily kinesthetic type of compartment they need. They’re just not getting it right now.”

The hope is these days can serve as a foundation to build on when and if the teams get back out on the field.

“It’s the same thing as when coaches go to a coaches clinic,” Sinz said. “If you can come away with at least one thing, you think it’s a positive experience. ... Obviously we’re hoping they take away more than one thing, but it’s better than not doing anything.”

Football teams are allowed five days of unrestricted contact during the summer period. Memorial, which kicked off its contact period Tuesday, will only use three of those days, while North, which started Monday, will only use four.

Memorial is conducting three full-team meetings that run about 45 minutes to an hour. Tuesday was a general team meeting, Wednesday focused on the offense and Thursday will focus on the defense. The staff is encouraging the over-100 players coming out for football to log in for all of the sessions.

“We don’t know if you’ll play offense, defense,” Sinz said. “Kids get injured, suspended, sick, whatever it might be. It’s good for everybody to learn both sides of the ball.”

The Eau Claire school board voted late Monday night in favor of a hybrid schooling model, with high school students going into school for two days and learning remotely for three. The plan is flexible and may change in the six weeks before classes begin on Sept. 1.

Jarzynski said he’s unsure what effect that decision will have on athletics.

“I just don’t know,” Jarzynski said. “I know that’s an unsatisfying answer, but there’s so much time between now and when school is scheduled to start.”

Another major decision could be made Thursday when the WIAA Board of Control convenes for a special business virtual meeting at 9 a.m. The governing body of prep sports in Wisconsin said they will address fall sports at that time.

Among the topics set to be discussed is a proposal submitted by school administrators from the southwest portion of the state that calls for fall sports to be moved to the spring and spring sports moved to the summer.

“If the WIAA announced this new sports season schedule as a temporary measure to combat the spread of COVID, it would provide a measure of hope to our students, coaches, families, and communities that although it might look different, all WIAA student activities would be able to continue,” said a copy of the letter from the southwest Wisconsin schools’ administrators reviewed by the Leader-Telegram.

“This would provide our student-athletes some optimism there could be three separate seasons as we have had in the past. This would also help reduce the additional mental stress of our students compared to total cancellation.”

There are criticisms of the plan, but with just two weeks remaining before football practice is scheduled to begin and a month before the first games, it might be the most realistic path toward a somewhat normal season.

“We just tell our kids, ‘Wear your masks,’” Jarzynski said. “We have to nip this in the bud, because if this keeps going fall sports aren’t going to be the only ones in danger.”