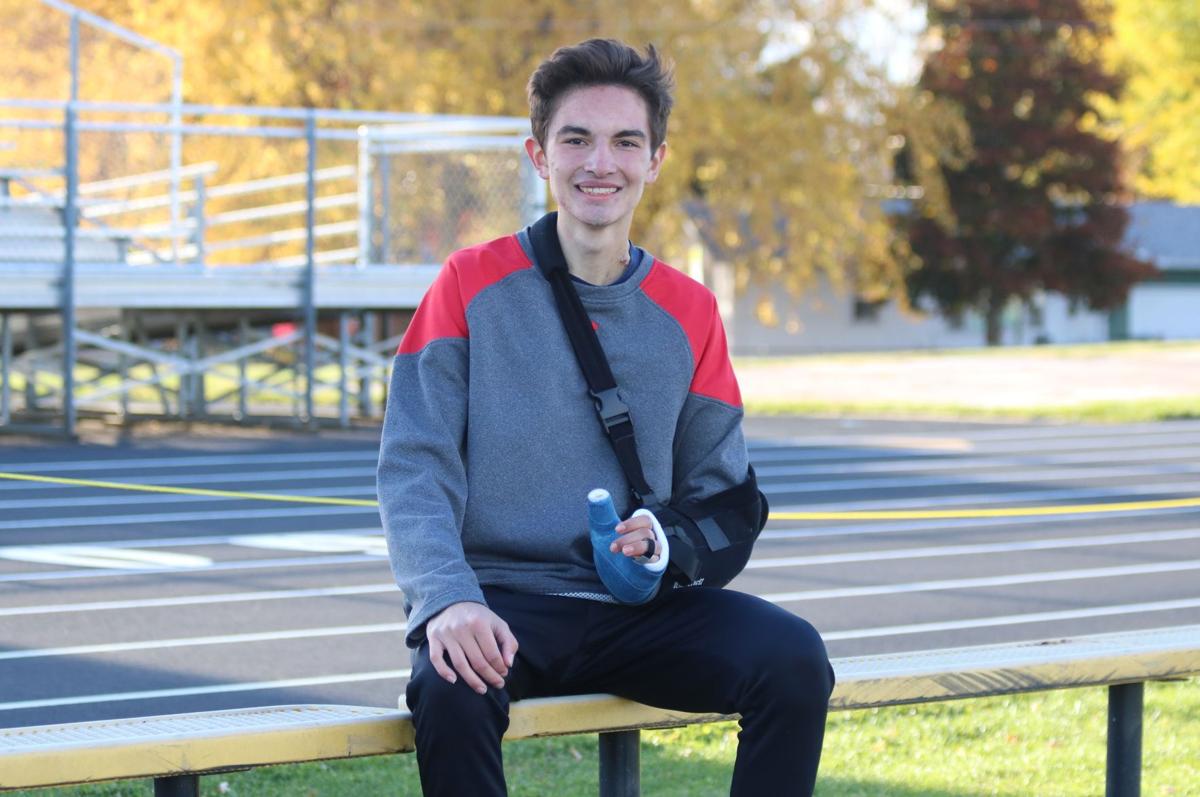 Fall Creek’s Ethan Wright sits on the sidelines during the Crickets’ practice Thursday. Wright is a manager with the team this fall after previously playing as a freshman. 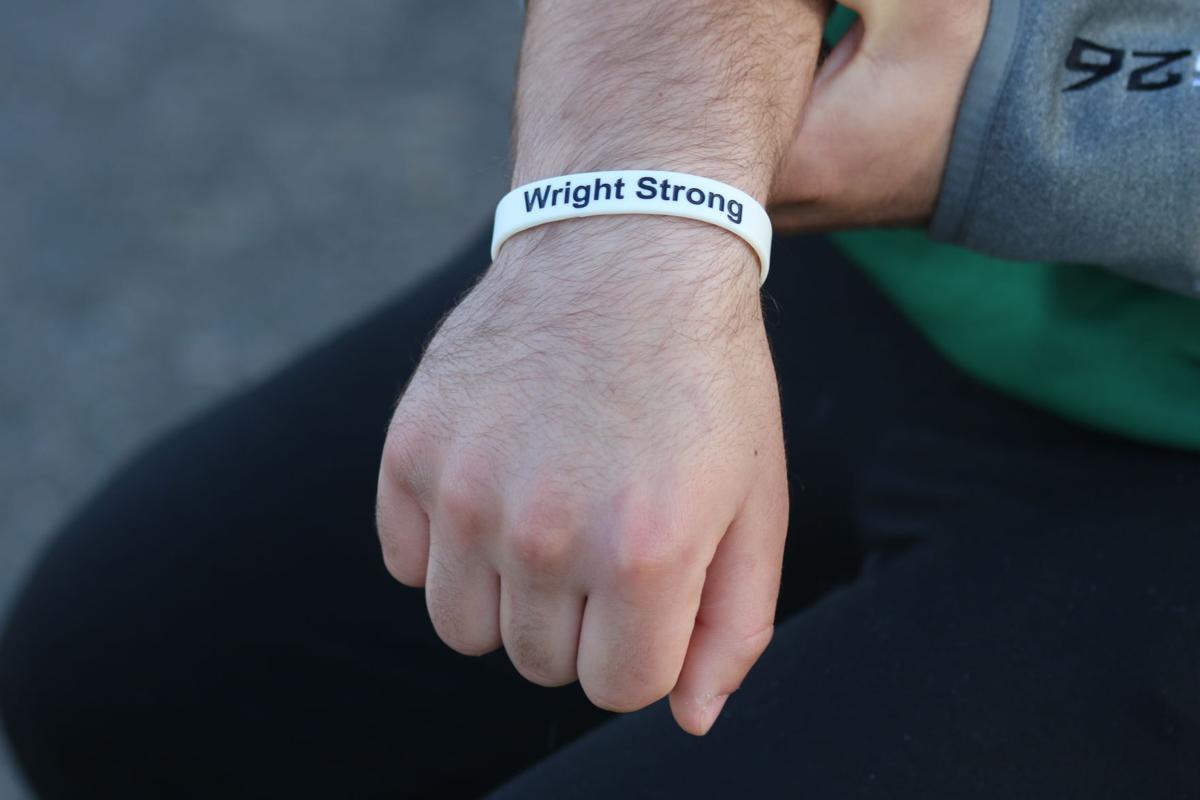 Fall Creek's Logan Gilles shows off his "Wright Strong" wristband, which he helped make to raise money for Ethan Wright following the accident.

Fall Creek’s Ethan Wright sits on the sidelines during the Crickets’ practice Thursday. Wright is a manager with the team this fall after previously playing as a freshman.

Fall Creek's Logan Gilles shows off his "Wright Strong" wristband, which he helped make to raise money for Ethan Wright following the accident.

FALL CREEK – Ethan Wright has embraced his role as a team manager to the fullest extent. He’s one of the first at Fall Creek football practice each day and one of the last to leave, always with a positive attitude. Crickets head coach Tyler Mickelson said he even knows all the plays.

Wright’s arm rested in a sling as he watched on with a smile during a chilly Crickets practice Thursday. That’s about the only clue that he was in a severe car accident less than a year ago.

It was March 8, and Wright sat asleep in the front seat as his dad, Terry, drove him home following baseball practice with the GRB Rays in Eau Claire. About a mile out of Fall Creek, the pair went over a hill on Highway 12 when Terry’s vision was obstructed by the headlights of an oncoming car.

In between the cars’ pair of headlights was a deer, standing to the north of the road.

“By the time I had time to react the deer had run and jumped across the road and hit my windshield and then entered into the car,” Terry Wright said.

The deer crashed through the glass and onto Ethan, and he was in bad condition.

He was first taken to the fire station in Fall Creek, then airlifted to the Mayo Clinic in Eau Claire before being airlifted again to Mayo’s headquarters in Rochester, Minn. He’d stay in Rochester for nearly a month before being discharged and finally returning home.

Wright, a freshman at the time, slept through the entire accident. That was a blessing.

“They said if I was awake, I would have died,” Ethan Wright said. “It would have bent (my neck) back way too much.”

He suffered a broken neck, a fractured skull, a broken nose, lost a few teeth and suffered nerve damage in his left arm. His mother Mary detailed the extent of his injuries to him in the hospital a few days later.

“I remember getting pretty upset because it’s hard to kind of wrap your head around when you’re sitting there and wondering why,” Wright said. “I wondered, ‘Why me?’ I was looking forward to the baseball season because it’s my favorite time of the year.”

Of course, when dealing with a broken neck, the result could have been much worse. After a couple of weeks Ethan Wright began walking again, and any thoughts of “why me?” were replaced by a brighter outlook. After all, he had plenty of therapy to work through and skills to re-learn.

Terry Wright, a coach himself, now uses his son’s drive as an example for his players.

“Watching him have to learn how to walk and eat and get stronger, it was a couple of weeks (until) we knew he was in a good spot,” Terry Wright said. “With his attitude, it completely changed our attitude toward his accident. …

“That will be the one thing that I will remember throughout the whole thing, is how strong he’s been and how positive he’s been through everything.”

He underwent two neck surgeries, the first because doctors thought blood had pooled in his neck and was limiting his arm movement. Turns out it was spinal fluid, so he needed a second surgery in the back of his neck to perform a fusion.

“Since (the accident), we have had nothing but positive answers to all of our prayers and questions,” Terry Wright said.

Fall Creek did not forget about him when he was away. He received a flurry of get-well cards and heard from many in the tight-knit village.

Logan Gilles remembers first hearing about the accident the next morning when then-Fall Creek football coach Dean Laube sat the team down to break the news during an offseason workout. He had actually texted Ethan Wright earlier to see where he was. He was always at workouts.

Gilles didn’t have the details but could tell just by the tone of Laube’s voice that it must have been severe.

“It was a really hard workout after that,” Gilles said. “It was really difficult to get through that, thinking about it the entire time. It’s one of those things that you can’t really get out of your head. You hear about your best friend getting into a pretty bad accident that he’s in the hospital for, that’ll get in your head.”

Soon thereafter, he decided he needed to do something to lend a hand. Gilles, a fellow lineman, helped make wristbands and sweatbands with “Wright Strong” written across them to sell for $2 each. The proceeds were given to Ethan and his family.

“When we announced that we had made them, everybody wanted one,” Gilles said. “Everybody was always asking for one.”

Gilles still wears his wristband on his arm, even as Ethan Wright has returned to Fall Creek practices.

The support transcended school walls, as well. When Ethan Wright was finally able to leave the hospital, Fall Creek put on a parade for him. His progress was certainly worth celebrating.

“Thankfully, I came out how I did,” Ethan Wright said. “I could have easily been paralyzed from the neck down. Actually, they thought I was. I could have been dead. Thankfully I just walked out with a nerve-damaged arm, which I just got a surgery for. And in about four to eight months I’ll be moving my arm again.”

Mickelson, in his first year with the program, wasn’t hired yet when the accident occurred. He’d actually watched Ethan Wright’s freshman film before athletic director Brad Ceranski told him what happened and was incredibly excited for the player he was inheriting.

Wright started at center for the Crickets as a freshman, holding his own against bigger linemen in the Cloverbelt. Mickelson said you could pick any spot on the O-line or D-Line, Ethan Wright would have made an impact there.

“When you watch film of him as a freshman, you think, this guy is going to be an immediate sophomore starter at the varsity level and he’s an instant difference maker,” Mickelson said. “Then I heard what happened and I heard that he survived, and he’s recovering, and now he’s going through surgery and then I heard that he wants to come out and be part of the team.

“I thought, ‘Awesome.’ And then the first time you talk to him, he just blows you away. He’s just so upbeat, he’s so positive.”

Ethan Wright’s duties include setting up equipment and keeping track of time in practice, making sure Mickelson stays on schedule. He’ll blow the whistle each five minutes to alert the Crickets it is time to move on to the next cycle. Mickelson said he was basically running the show at the start of the season.

He’s on the sidelines during games, giving him a chance to motivate and, at times, give advice.

“It’s definitely nice, feeling like you’re still a part of the team, still having that brotherhood,” Ethan Wright said. “I’m a sophomore, I had three years technically left of football. I can’t leave it now, I’m not a senior yet.”

The leadership he showed on the field hasn’t disappeared now that he’s restricted to the sidelines. Mickelson described him as a rallying call for his guys.

“If you didn’t know him, didn’t meet him, didn’t know what happened to him, you would think he was a starter on the varsity football team because there’s never any hesitation,” Mickelson said. “He’s just dedicated, he’s dedicated to his team. He’s just the ultimate teammate.”

Doctors have discouraged him from playing football again, but the door remains open for Ethan Wright to return to competition in his two other sports, baseball and basketball. Thankfully, when it comes to his future as a pitcher, the nerve damage is on his catching arm. He said he’d gotten up to 84 mph as an eighth grader.

“This is kind of a setback, but everybody has a setback,” Ethan Wright said. “It’s your comeback story that everyone likes to hear about. That’s kind of what gives me the motivation to keep pushing. What about the comeback story?”