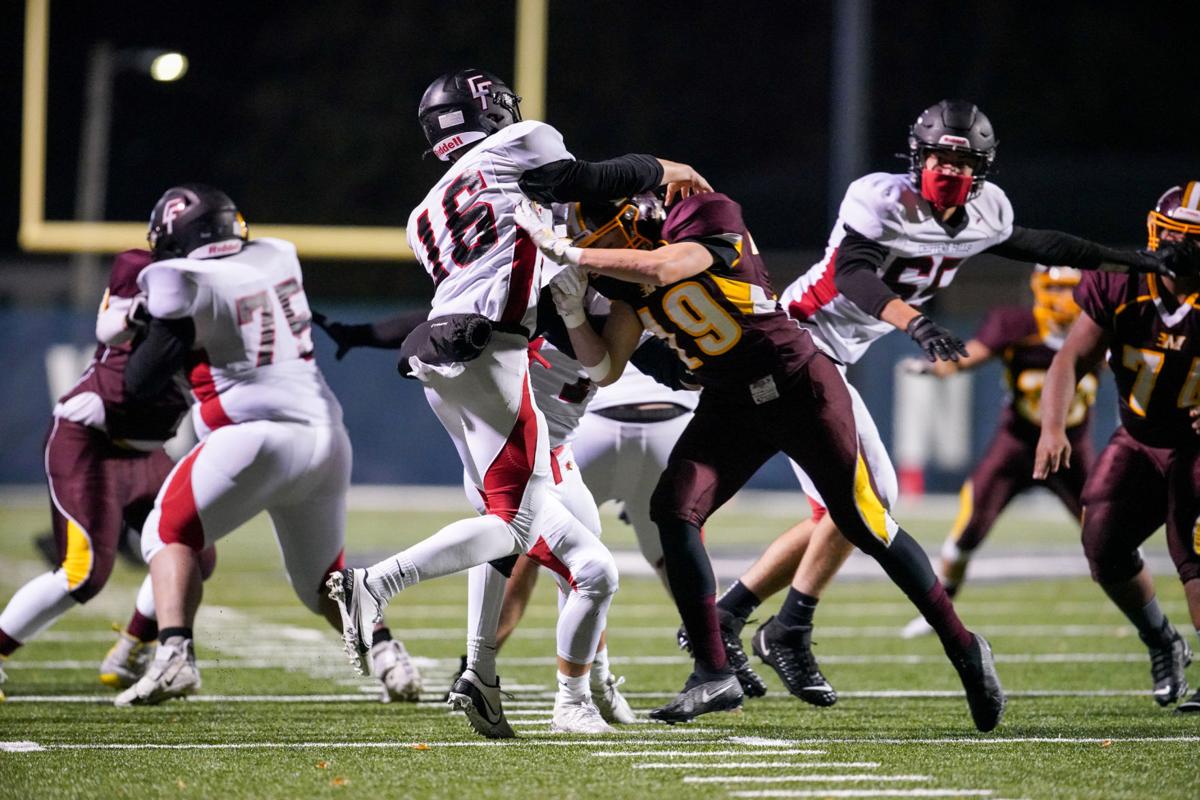 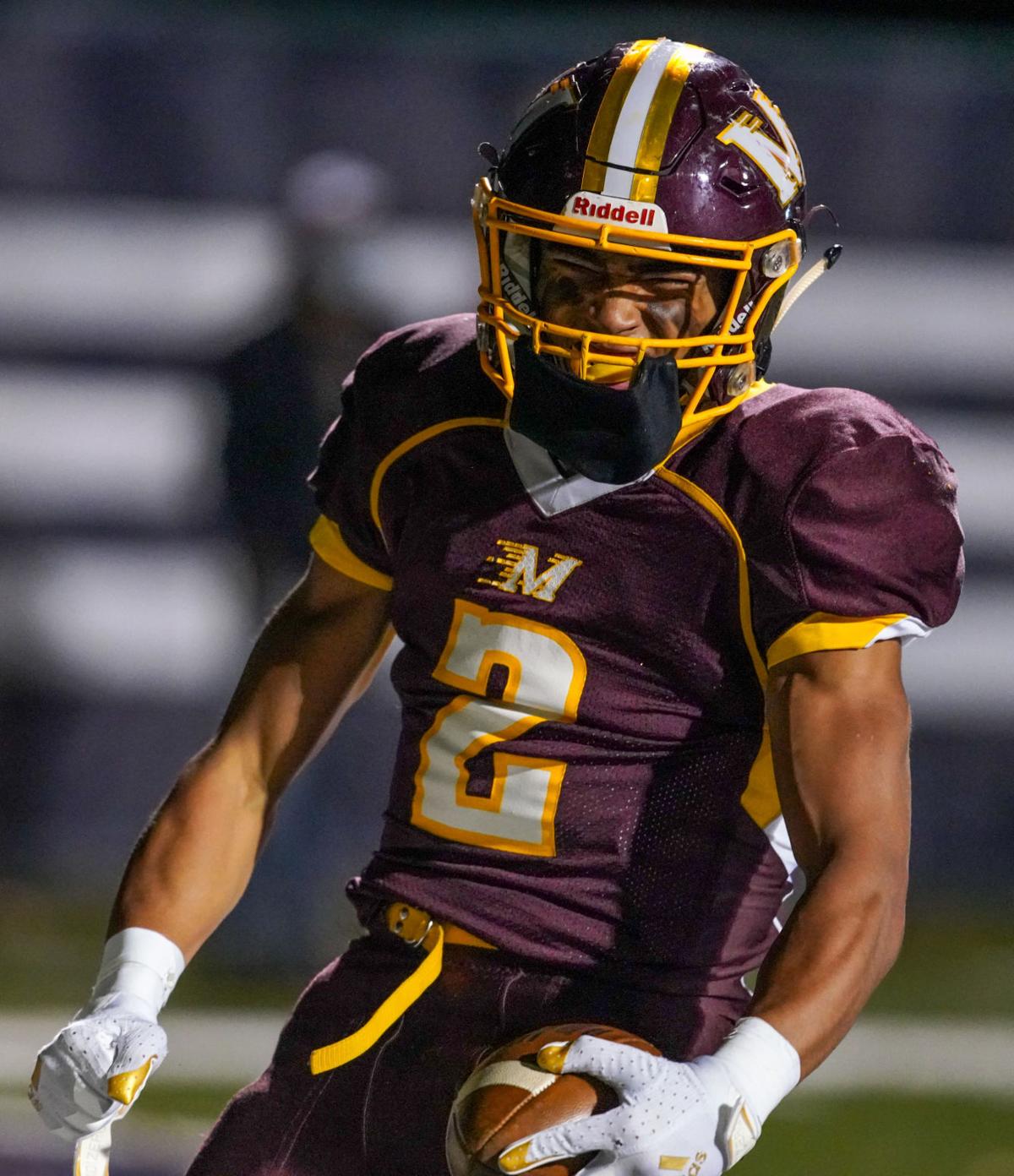 Menomonie's DeVauntaye Parker celebrates after a touchdown against Chippewa Falls on Friday in Menomonie. 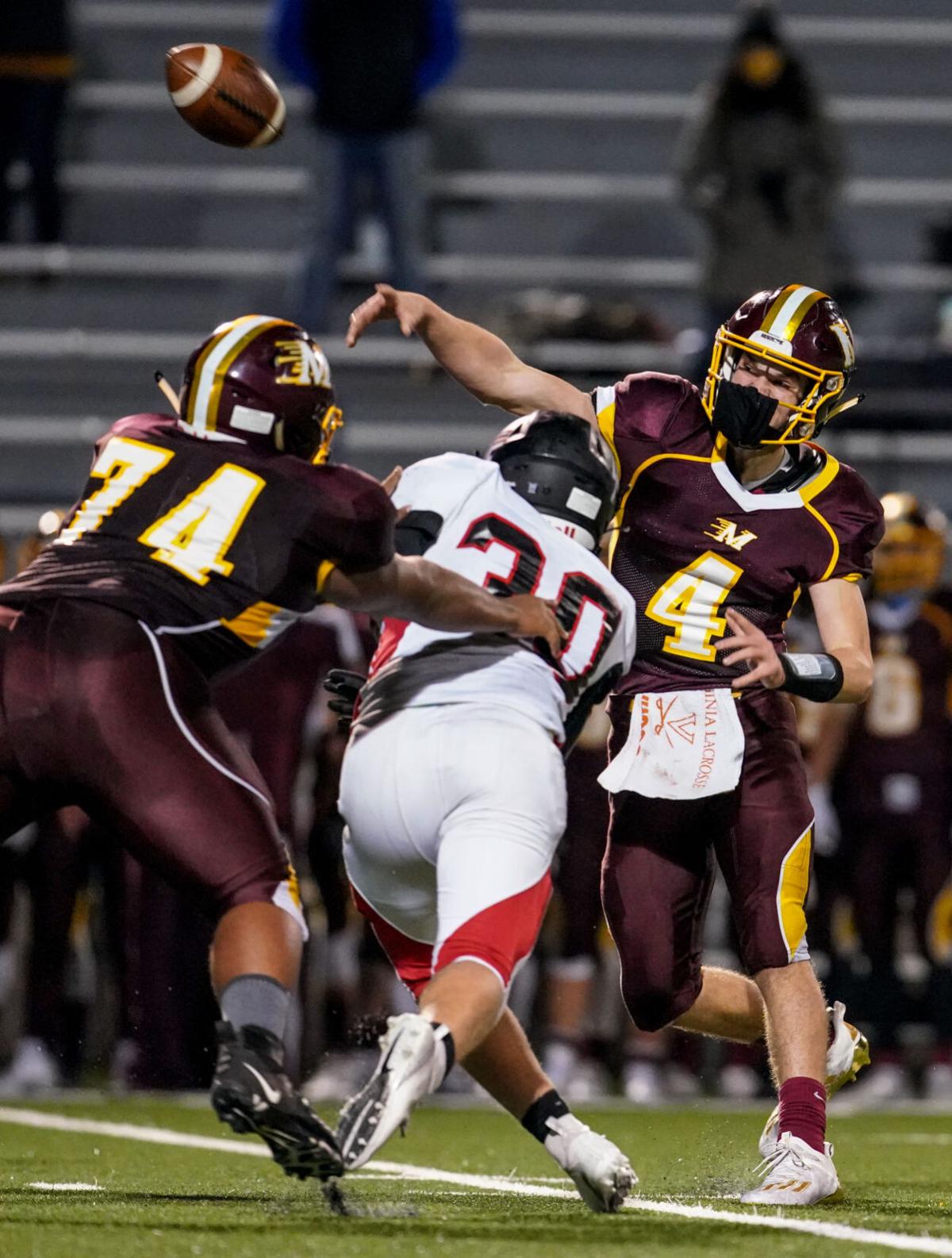 Menomonie's DeVauntaye Parker celebrates after a touchdown against Chippewa Falls on Friday in Menomonie.

MENOMONIE — The Menomonie defense’s shutout streak came to an end on Friday, but their torment of Western Wisconsin did not.

The Mustangs forced a pair of interceptions and held Chippewa Falls without a first down until the Cardinals' final drive of the first half in the team's 24-6 victory at Williams Stadium in Menomonie. There were times in the second half where the Cardinals found more of a groove, but the Mustang defensive unit seemingly extinguished any Cardinal momentum whenever their rivals to the east showed promise.

"Our defense has just played tremendous since we got our guys back," said Menomonie coach Joe LaBuda, alluding to the players held out of the team’s Week 1 loss due to contact tracing. "They've really flown around and played well."

LaBuda's squad has gone 3-0 since that shorthanded season-opening defeat at the hands of Hudson, previously blanking New Richmond and Marshfield prior to Friday's contest. The fully deployed group should be a handful for anyone in the Big Rivers.

"We just made too many mistakes," Chippewa Falls coach Chuck Raykovich said. "You can't make a mistake against Menomonie. They're going to capitalize on it. Our young kids just made a few too many tonight, but they battled."

Menomonie asserted its dominance on the offensive side of the ball too early on, taking advantage of advantageous field position on its first two drives. Direct snaps to the team's dynamic rushing duo of DeVauntaye Parker and Will Ockler accounted for much of the production as the Mustangs made it to the end zone on drives of 28 and 45 yards, first on a 4-yard direct snap to Parker and then a 4-yard fullback run from Ockler.

Then the Cardinal defense settled down, frequently getting pressures on Menomonie's pair of signal-callers, Ryan Kahl and Reed Styer. The Mustangs were only able to add a field goal to their lead before the break, when Kaleb Kazmarek pushed the score to 17-0 with a 28-yard boot.

"The first two series we played really well offensively," LaBuda said. "Then I think we got a little complacent and kind of relaxed too much. But they've got some really good players."

A roller coaster final few minutes of the first half gave Chippewa Falls its best chance to get back within 10 points. Menomonie's Parker Schultz blocked a Jack Meyer punt to set the Mustangs up in the red zone, but two plays later the Cardinals recovered the ball on a Parker fumble. That gave Raykovich's offense the boost to embark on its first long drive, going from its own 32 to the Menomonie 30, yet any gained momentum was dashed when Dominic Stellino picked off Chi-Hi QB Brayden Warwick to end the possession.

Menomonie ended the second quarter on a kneel down, then took a commanding 24-0 lead on the first play of the third when Parker returned the kickoff 95 yards to the house on a reverse. Suddenly, the window of opportunity was slammed shut.

Chippewa Falls was able to string together longer drives in the second half, mostly on Warwick passes to Isaac Frenette and Karson Bowe. The team's lone score came on the first play of the fourth quarter when Warwick hit Frenette in the right corner of the end zone for a 24-yard connection. Frenette finished with 11 catches for 168 yards, while Chi-Hi as a team outgained Menomonie thanks to the second half push.

Unfortunately for the Cardinals, the yards didn't translate into a comeback effort.

Parker put up 66 yards on the ground for Menomonie in addition to his special teams score, while Ockler was close behind with 62.

It was an unusual atmosphere for this historic rivalry, which reached a 108th meeting on Friday. The cavernous Williams Stadium grandstand was dotted with a small group of parents.

"This whole season's been weird," Raykovich said. "Let me put it this way: life's been weird."

The Mustangs are tied for second place in the Big Rivers standings, only behind a River Falls squad that has been limited to two games through four weeks. The conference's standings are unofficial this year due to the coronavirus pandemic, but don't tell LaBuda or the players that. They are still gunning for glory and, with River Falls still on the schedule, happy to control their own destiny.