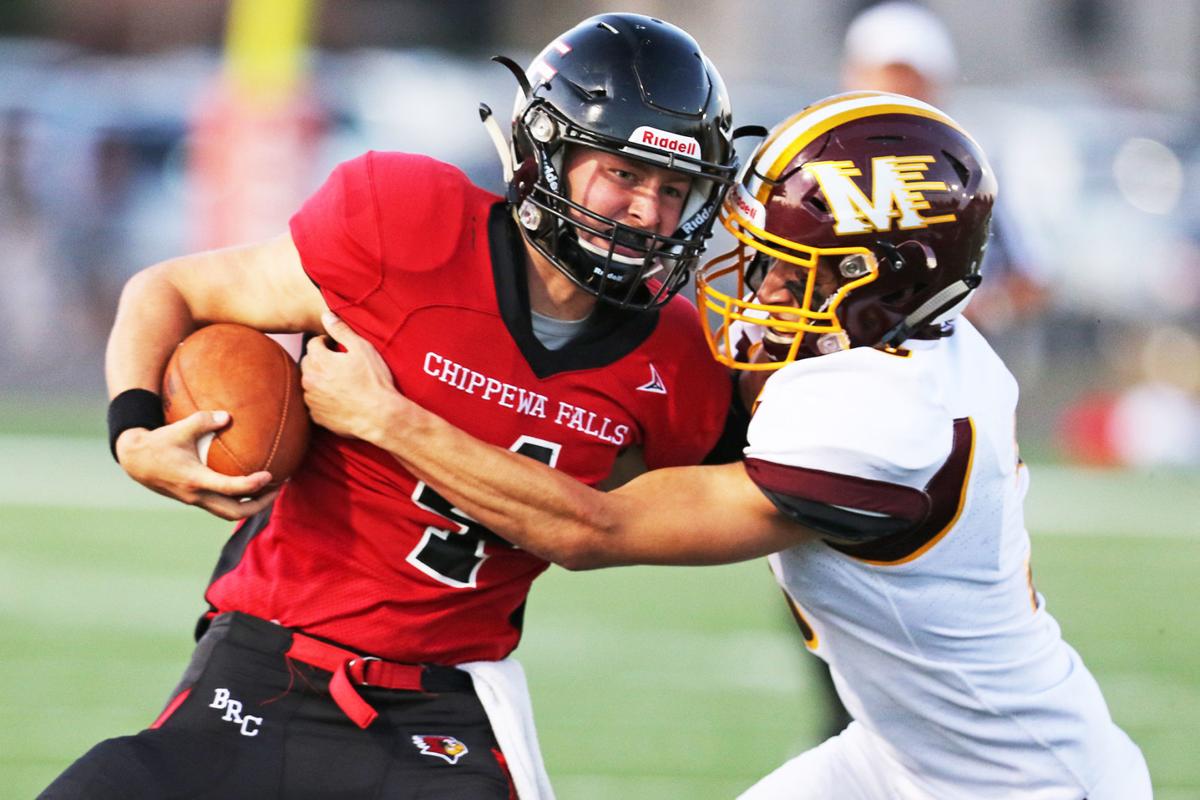 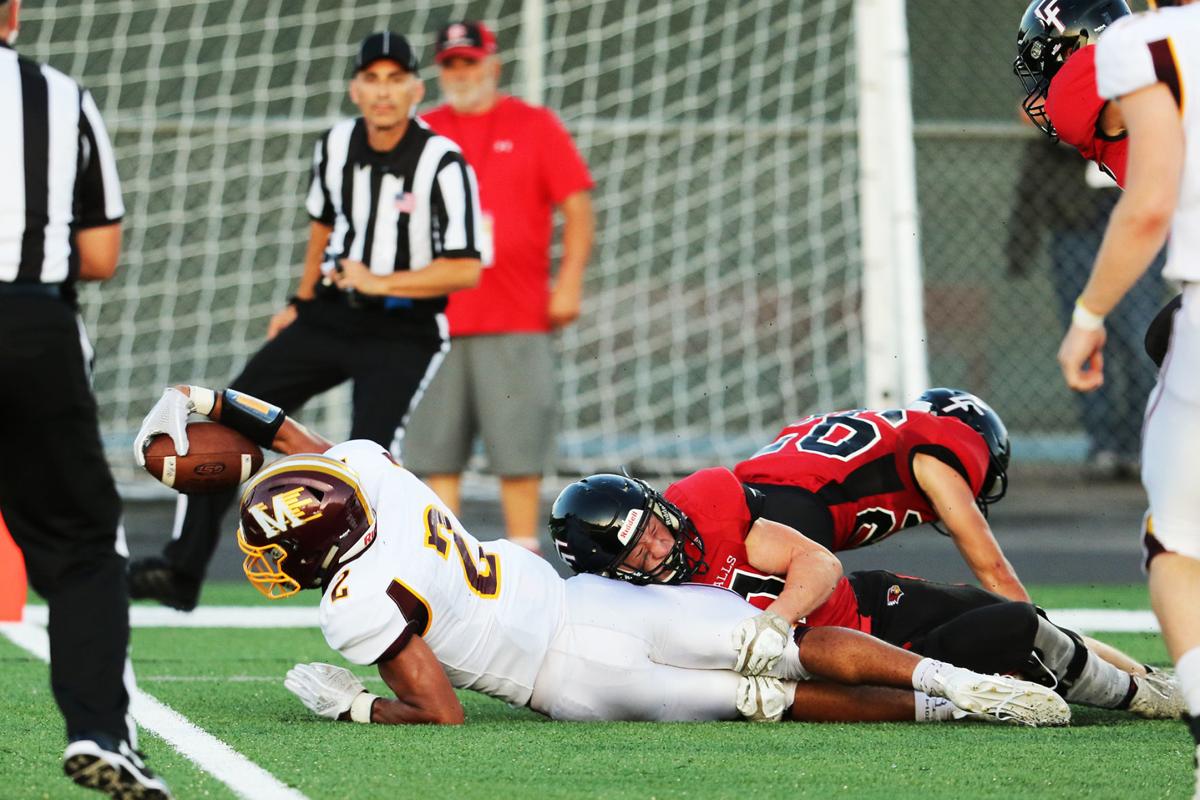 Menomonie’s DeVauntaye Parker gets tackled by Chippewa Falls’ Nicholas Bruder as he reaches the ball into the end zone during their football game at Chippewa Falls High School on Friday. 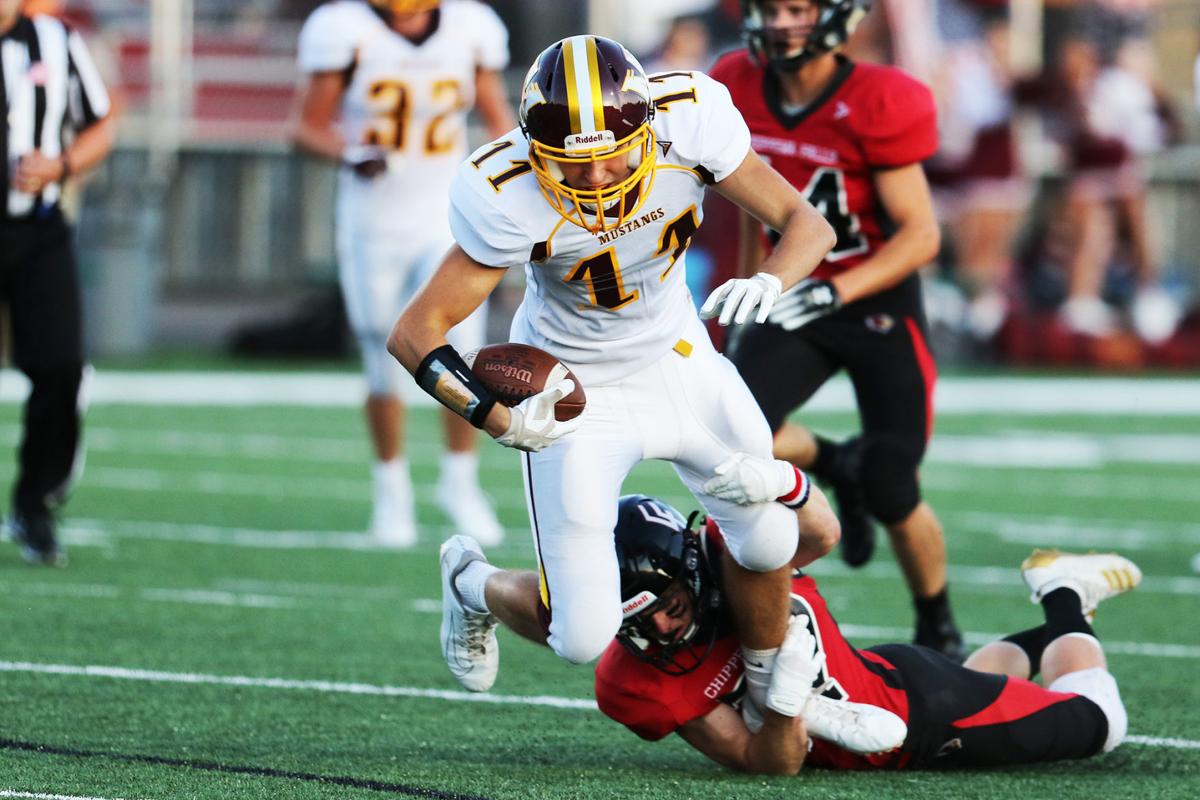 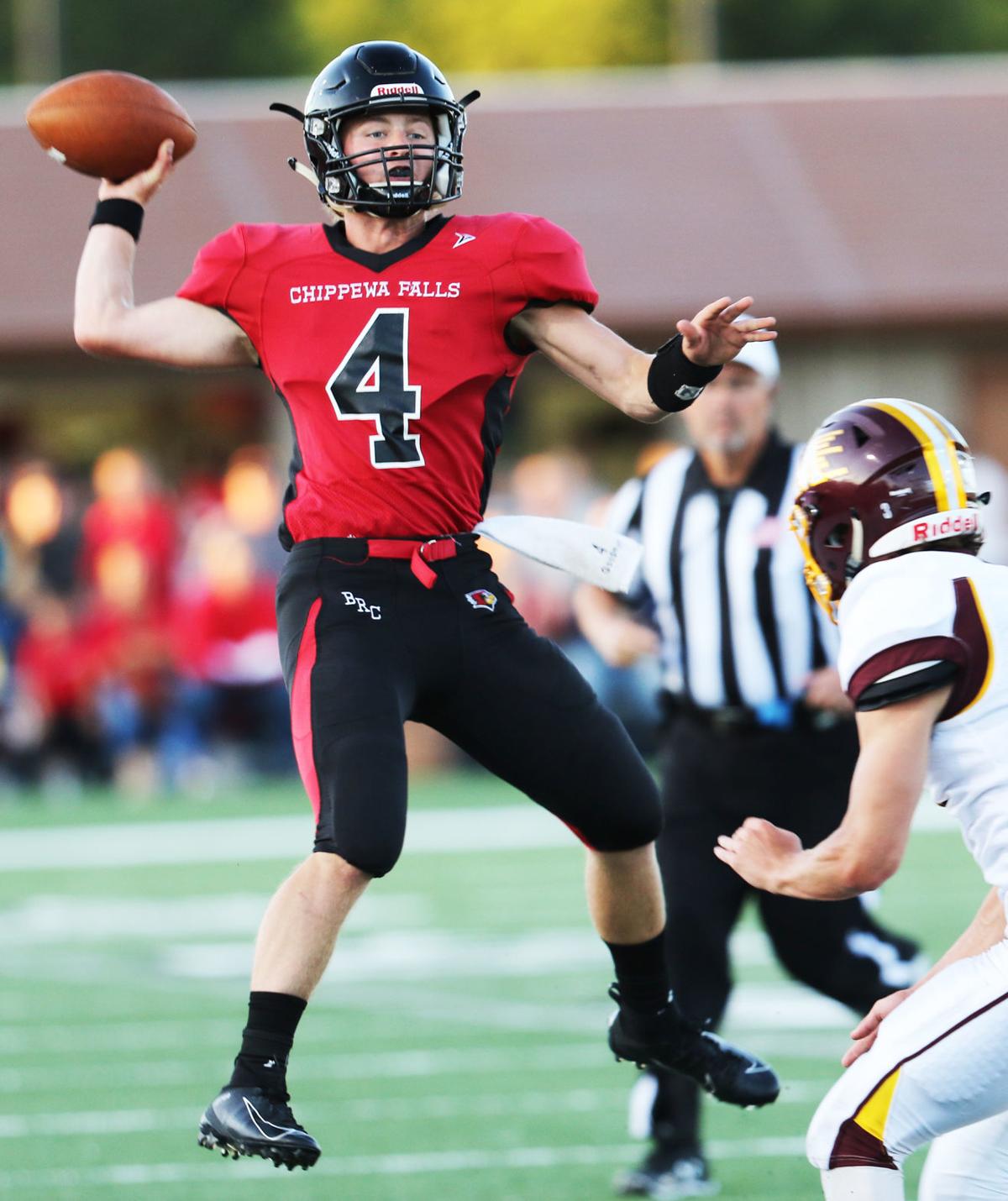 Chippewa Fall’s Hayden Goodman jumps to pass the ball during their football game against Menomonie at Chippewa Falls High School on Friday.

Menomonie’s DeVauntaye Parker gets tackled by Chippewa Falls’ Nicholas Bruder as he reaches the ball into the end zone during their football game at Chippewa Falls High School on Friday.

Chippewa Fall’s Hayden Goodman jumps to pass the ball during their football game against Menomonie at Chippewa Falls High School on Friday.

For years, the Big Rivers rivals have battled in the trenches, moving the ball methodically along the ground. But Friday night was totally different.

The Menomonie Mustangs came out firing through the air, tallying 328 passing yards en route to a 42-18 victory over the Cardinals at Dorias Field.

“We really didn’t know that they were going to throw so much,” Cardinals coach Chuck Raykovich said. “I was sitting there thinking, ‘Geez, they haven’t run much at all tonight.’ So yeah, it was a surprise.”

Menomonie attempted just 20 passes in its first two games of the season, tallying 92 yards on six completions. But after a week of intense passing practice, Mustangs coach Joe LaBuda decided to take the training wheels off his two inexperienced quarterbacks.

“I wanted to ease them in,” LaBuda said. “Tonight was the night for them to become more of a part of our offense.”

It started on Menomonie’s first play from scrimmage.

Senior quarterback Tyler Werner drew the Cardinals defense in with a play action to his running back, before turning around and firing the ball to tight end Jaylen Wright for a 35-yard gain. Four plays later, he hit Davis Barthen for a 15-yard gain, putting the Mustangs in scoring position.

Another pass to Barthen in the flat set the Mustangs up at the one-yard line and Will Ockler punched it in to give Menomonie the early lead.

Barthen put the Mustangs in great field position again on Menomonie’s second drive, this time via the return game. He fielded a Cardinals punt just in front of midfield and returned it 36 yards to set the Mustangs up at the 15. Three plays later, DeVauntaye Parker punched it in with a six-yard run.

Despite Werner’s early success, LaBuda decided to give junior Ryan Kahl a chance under center in the second quarter. It paid off in a big way as Kahl hit Barthen for a 56-yard touchdown to give the Mustangs a 21-3 lead.

The Cardinals used some trickery to get on the board in the second. Quarterback Hayden Goodman drew the Mustangs defense to the right by feeding Tyler Bohland behind the line, but Bohland flipped the ball to Ben Steinmetz coming to his left, confusing the Mustangs defense and leading to a 66-yard touchdown run.

“They’ve done a great job of that for years,” LaBuda said of the Cardinals’ trick play.

The touchdown pulled the Cardinals to within 11, but that was as close as they’d come.

Barthen added another score, fielding a punt at the 47-yard line and taking it to the house.

Another touchdown pass from Werner, this time for 30 yards to Kaleb Miller, put the Mustangs up 25.

Despite the lopsided score, Raykovich was pleased with his team’s play.

The Mustangs return to action Friday night when they play host to River Falls.

Chippewa Falls will look to get its first win of the season when it heads on the road to Rice Lake on Friday.