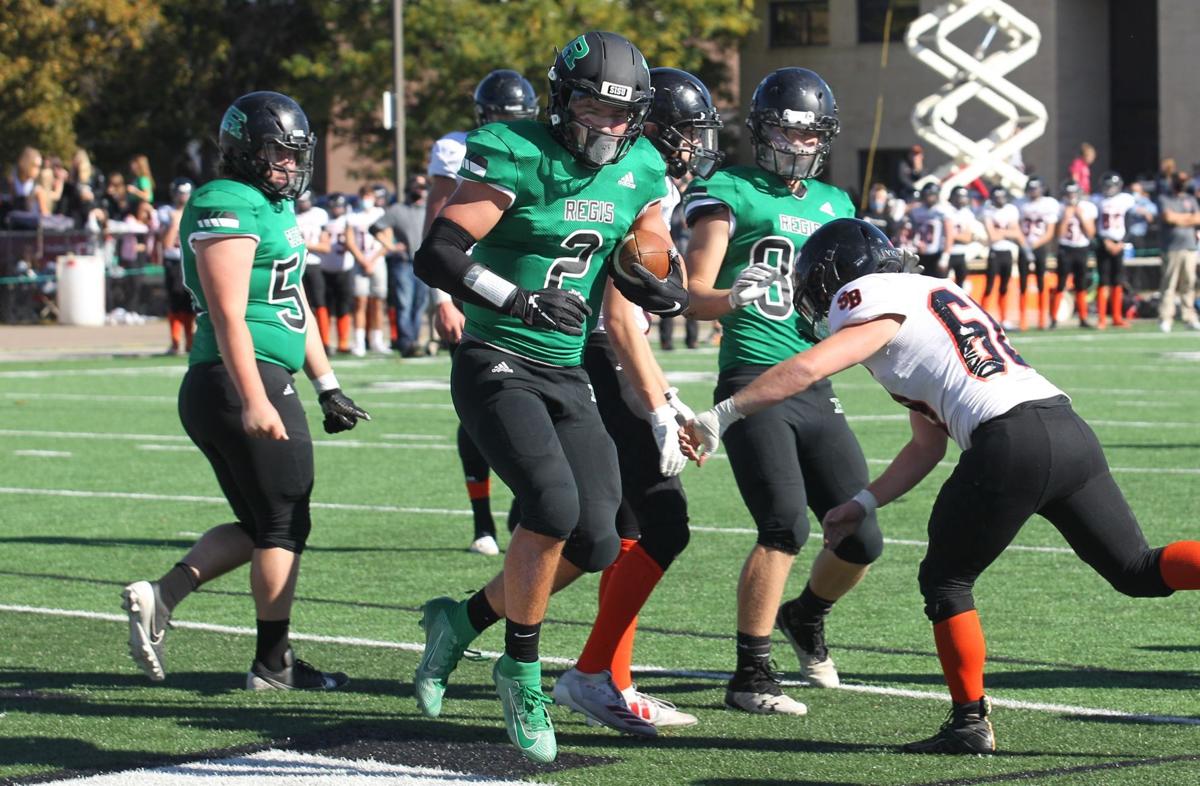 Regis’ Zander Rockow gets to the end zone for a two-point conversion against Stanley-Boyd on Saturday, Oct. 10 at Regis. 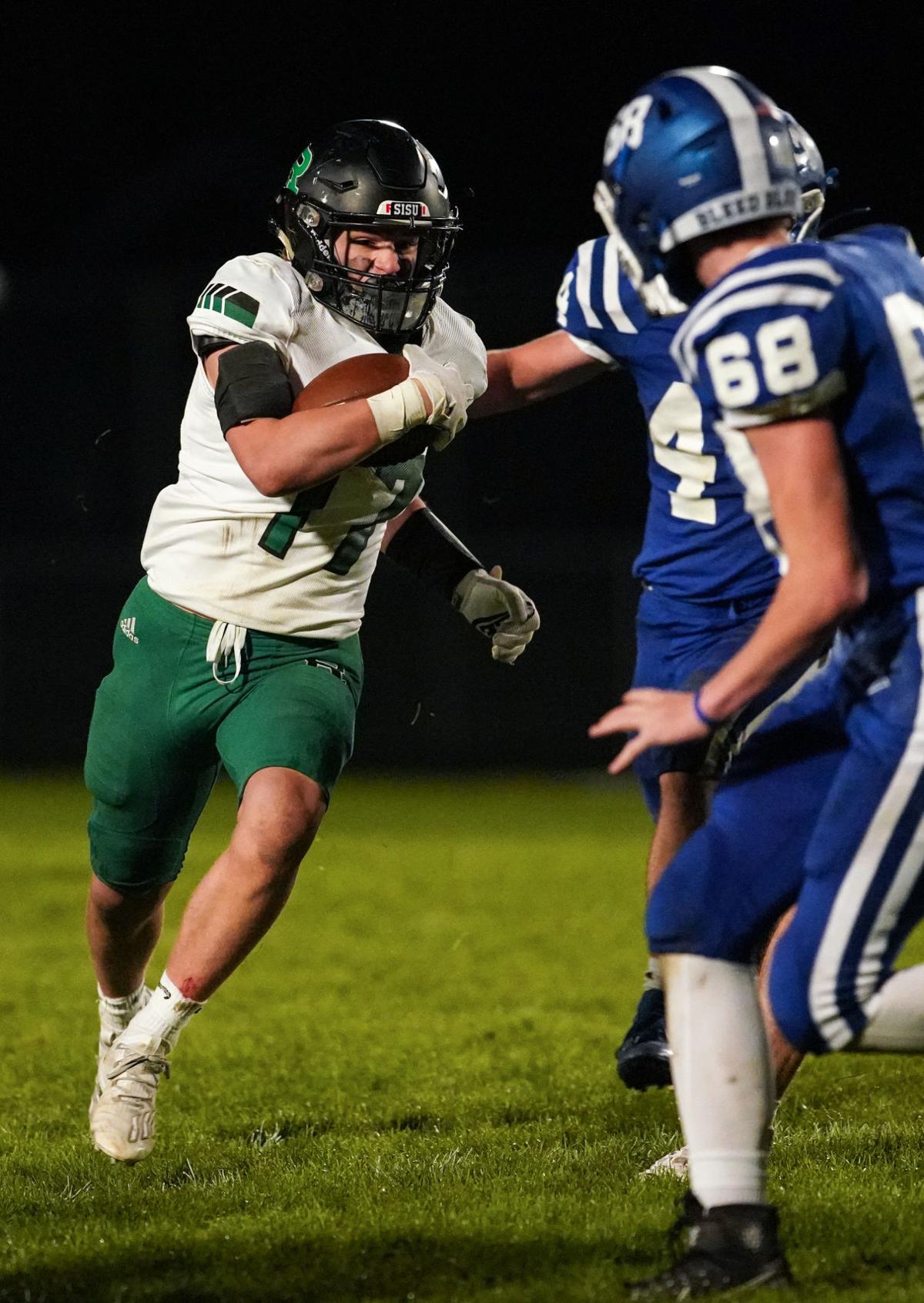 Regis' Drew Goettl runs with the ball against Mondovi on Friday, Oct. 2 in Mondovi. 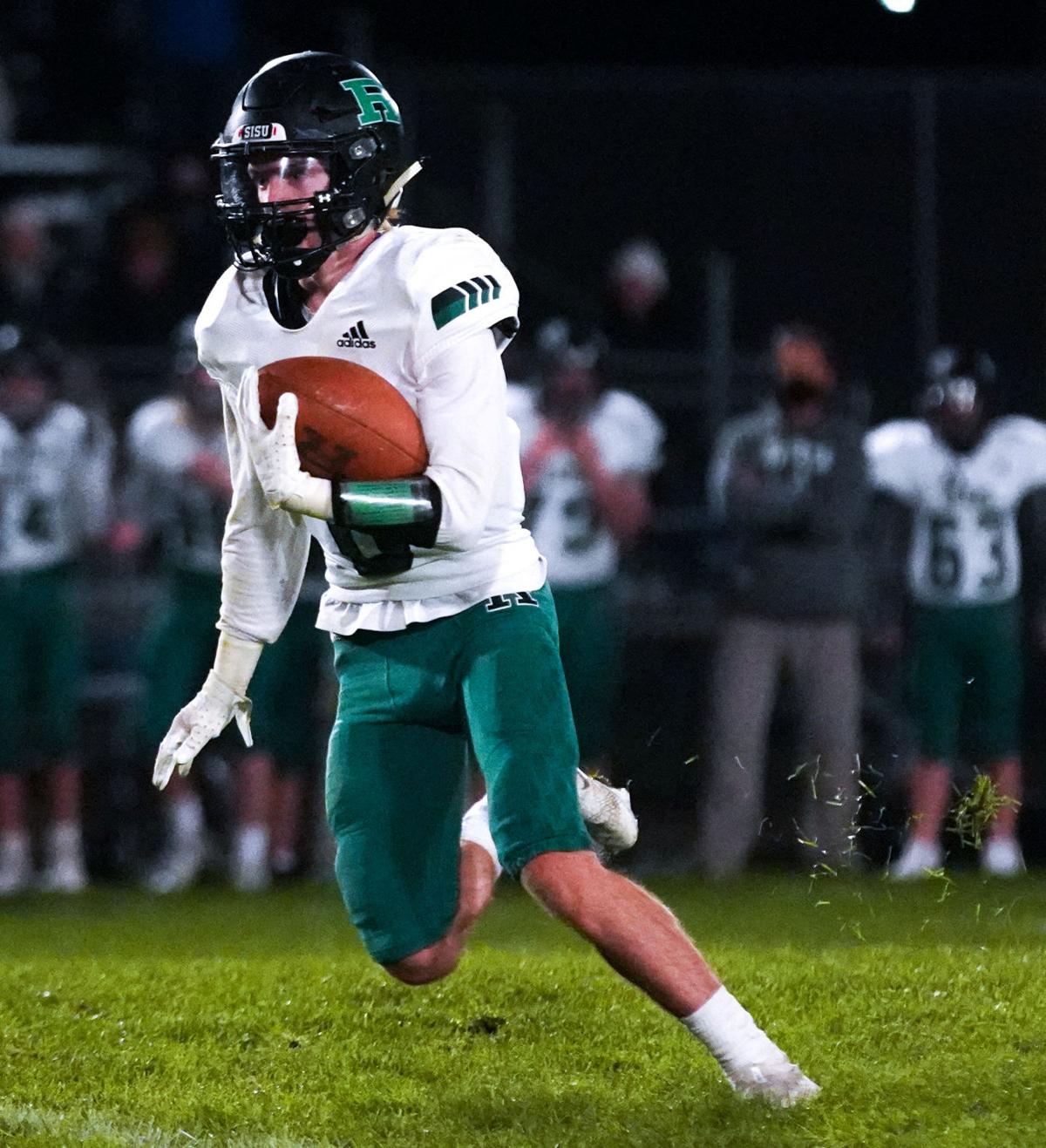 Regis' Aaron Haselwander runs down field against Mondovi on Friday, Oct. 2 in Mondovi. 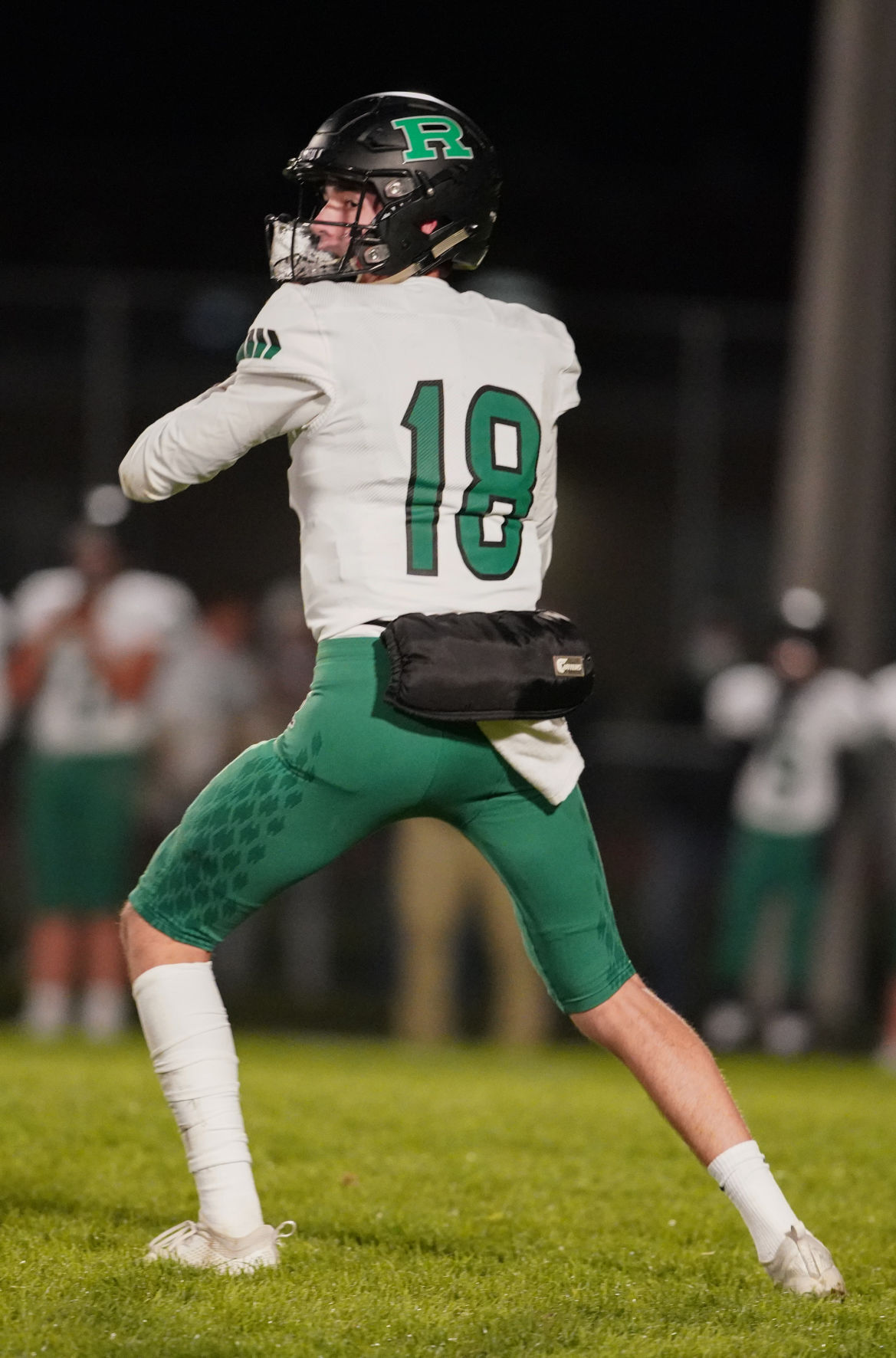 Regis' Bennett Seelen prepares to make a pass against Mondovi on Friday, Oct. 2 in Mondovi. 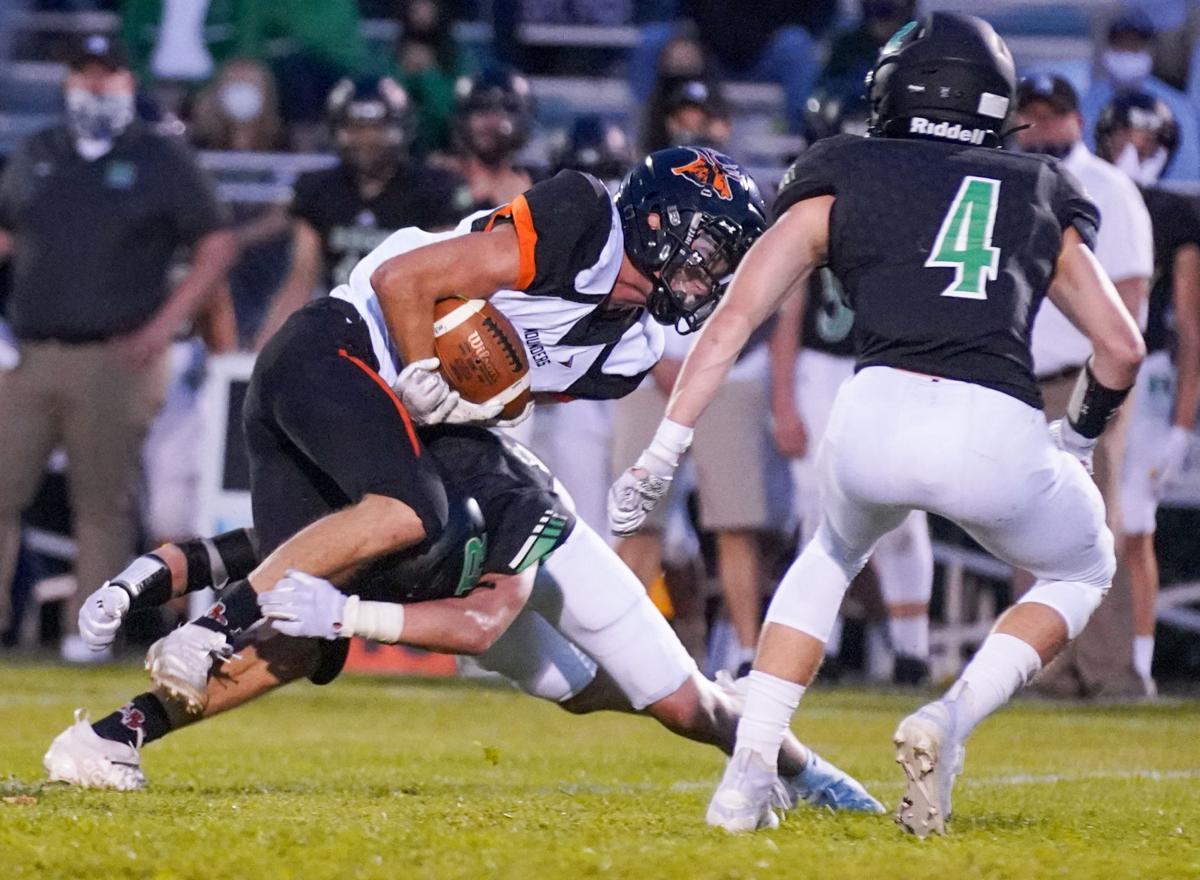 Elk Mound's Ben Heath is hit by a Regis defender during a football game on Friday, Sept. 25 in Elk Mound.

Regis’ Zander Rockow gets to the end zone for a two-point conversion against Stanley-Boyd on Saturday, Oct. 10 at Regis.

Regis' Drew Goettl runs with the ball against Mondovi on Friday, Oct. 2 in Mondovi.

Regis' Aaron Haselwander runs down field against Mondovi on Friday, Oct. 2 in Mondovi.

Regis' Bennett Seelen prepares to make a pass against Mondovi on Friday, Oct. 2 in Mondovi.

Elk Mound's Ben Heath is hit by a Regis defender during a football game on Friday, Sept. 25 in Elk Mound.

Despite orchestrating another envy-worthy season, Regis football can’t help but leave 2020 wondering what could have been.

“It was probably the most difficult ending that we ever had,” Ramblers coach Bryant Brenner said.

That end came early for Regis when the district shut down fall sports activities on Oct. 28 amid rising quarantine numbers at the school. That wiped out the Ramblers’ final two regular season football contests of the year, games against Fall Creek and Durand, as well as a chance to compete in this year’s two-week playoff format.

Brenner, in his 13th season as Regis head coach, said everyone involved in the program is dealing with the ensuing emotions in their own way. A few weeks out from the decision, he’s personally coming to terms with it.

“Each day it gets a little bit better,” Brenner said. “I think for me, it helps seeing the kids each day in school, to see their faces and talk to them a little bit. It was tough the way it ended and then being virtual for two weeks.”

When Regis did play, the Ramblers were a force to be reckoned with. In a year with a normal playoff format, they certainly would have been considered a serious contender.

Brenner’s crew went 5-0 in a new-look Cloverbelt, opening the year with a trio of impressive victories against Elk Mound, Mondovi and Stanley-Boyd before taking care of business in one-sided affairs with Neillsville/Granton and Osseo-Fairchild. Pretty good considering Brenner entered the year wondering what he should expect out of a somewhat inexperienced bunch.

The rest of the Cloverbelt coaches were confident the Ramblers would figure things out, and they did quickly.

Bennett Seelen commanded the offense under center for a second year, completing 11 passes for 222 yards and two scores.

The defense kept teams under 14 points in every game. Payton Kostka, who led the team with 65 tackles, was named the Cloverbelt’s co-defensive player of the year this week. Rockow, a defensive lineman, and defensive backs Aaron Haselwander and JP Wolterstorff all earned first team all-conference recognition.

“I thought we were really tough to run the ball against,” Brenner said. “Although we did give up some pass yards, we didn’t give up a lot of touchdowns.”

The Ramblers graduate a 13-player class, including some notables at the skill positions. From an offensive perspective, Regis loses Mayer, Goettl and Aaron Haselwander in the backfield, the team’s second, fourth and fifth leading rushers, its QB Seelen and top receiver JP Wolterstorff. Many of the same players were leaders of the defense, which also needs to replace its top dog Kostka. David Haselwander rarely came off the field no matter if the offense, defense or special teams were being called upon.

Brenner gave credit to the seniors for stepping into leadership positions, helping carry the group when there were some growing pains early on.

This season didn’t bring the postseason memories Regis players have gotten used to, but it wasn’t without signature moments. That included a bit of history, when Regis played its first ever game on school grounds against Stanley-Boyd. The Ramblers traveled to Mondovi in Week 2 and earned a shutout victory against the Buffaloes, fresh off a trip to the Division 6 semifinals, that served as early proof of this squad’s ability to shine in big moments.

“A lot of those guys have witnessed really good football and they were hungry this year to take ownership of it, take ownership of the team,” Brenner said. “They did a great job of that. The last four years that those guys have been in school we haven’t lost too many games. When you take the sting of this season ending away and you look at their football career, they’ve had a really solid career.”