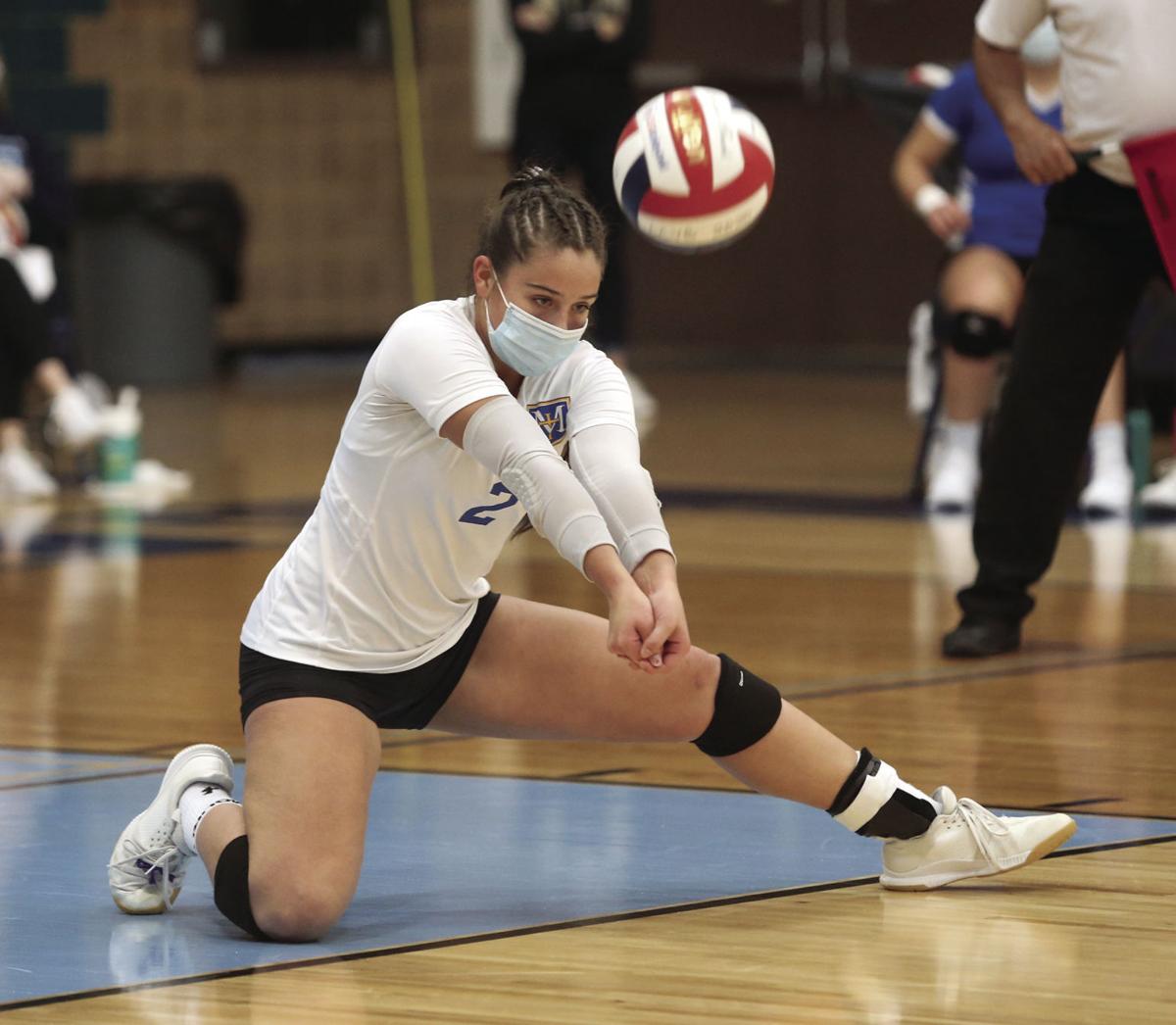 McDonell's Lauryn Deetz digs a Prentice attack during the opening set of a Division 4 state semifinal game in Little Chute on Nov. 7, 2020.

McDonell's Lauryn Deetz digs a Prentice attack during the opening set of a Division 4 state semifinal game in Little Chute on Nov. 7, 2020.

State tournaments bring added pressure. You’re competing on Wisconsin’s biggest prep stage, typically with fans from across the state in attendance. For some events, even more are watching on television.

Thankfully for a handful of Chippewa Valley girls basketball players, this week’s trip to La Crosse is not their first rodeo.

Both local schools who qualified for this year’s state tournament, McDonell and Fall Creek, also participated in the state volleyball tournament this fall. Look at the rosters, and many of the names are the same too. For Fall Creek, all five of the team’s top scorers are also volleyball players. Another player, Jenna Anders, was a qualifier for the state cross country meet in the fall.

“It’s been a goal of mine to go to state in both basketball and volleyball,” Fall Creek’s Gianna Vollrath said. “Accomplishing it finally in basketball, it’s so amazing. I can’t put it into words.”

Coincidence? Perhaps. But players who took part in both tournaments say the prior experience helped them in their road to the La Crosse Center. It’s a different sport that requires different physical skills, but mental skills have been developed.

“It definitely has helped,” Vollrath said. “In volleyball especially I got used to the pressure of the big game. I feel like that experience with volleyball has helped me with basketball because I haven’t gotten this far. So it really helped me have composure during the big games.”

Fall Creek coach Jason Martzke said his team doesn’t talk about the volleyball experience much but figures it likely is a benefit. Players know how to rachet up intensity come playoff time, something both these teams needed to do considering they required upsets in the sectional finals to get this far.

“Even when things didn’t go out the way we wanted it to, it was still one of the best experiences of my life,” Fall Creek’s Emily Madden said. “I wouldn’t take that experience away for anything.”

The players are willing to take any edge that experience can give them. Even if the perceived bonus of having played in high-stakes environments is tiny, it could be worth something.

“It’s a little boost,” McDonell’s Deetz said. “Volleyball and basketball can be totally different atmospheres, but it’s not really different in how important the games are. You know how you have to perform.”

Regardless of the results in La Crosse, the bar has been raised among the girls sports programs at the two schools. The basketball teams have guaranteed as much.

“It’s definitely going to make it interesting next year, with high expectations for ourselves and from our coaches and people watching us,” Deetz said. “But a lot of it is something cool to be a part of. That’s going to be history for the rest of your life.”

“Honestly, just going down as a Cricket legend,” Madden said of what it’s meant to be a part of this past year of Fall Creek success. “These are the years that people are going to remember, like, ‘Oh yeah, the class of 2021. It was a pandemic and we couldn’t really go watch any games. We had to watch over the livestream.’ Things are obviously different. Just knowing that our community and our town are still supporting us from a distance, it can’t get much better.”