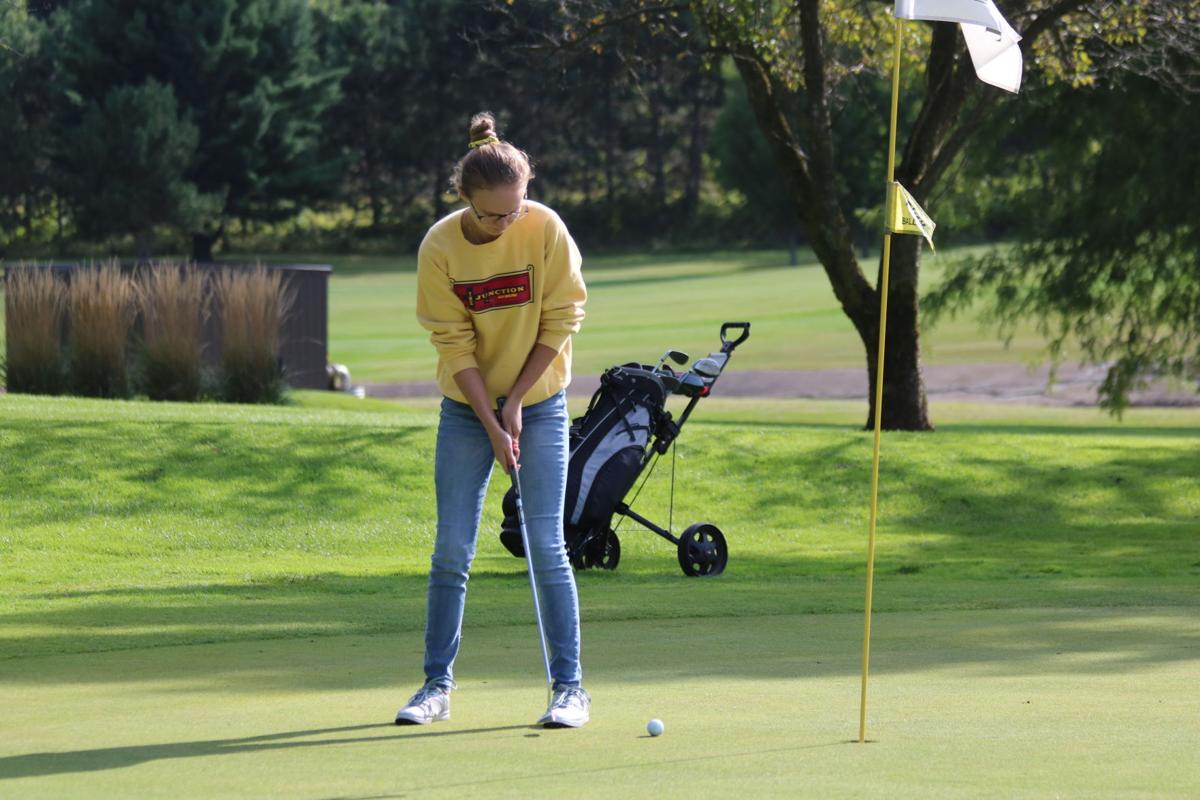 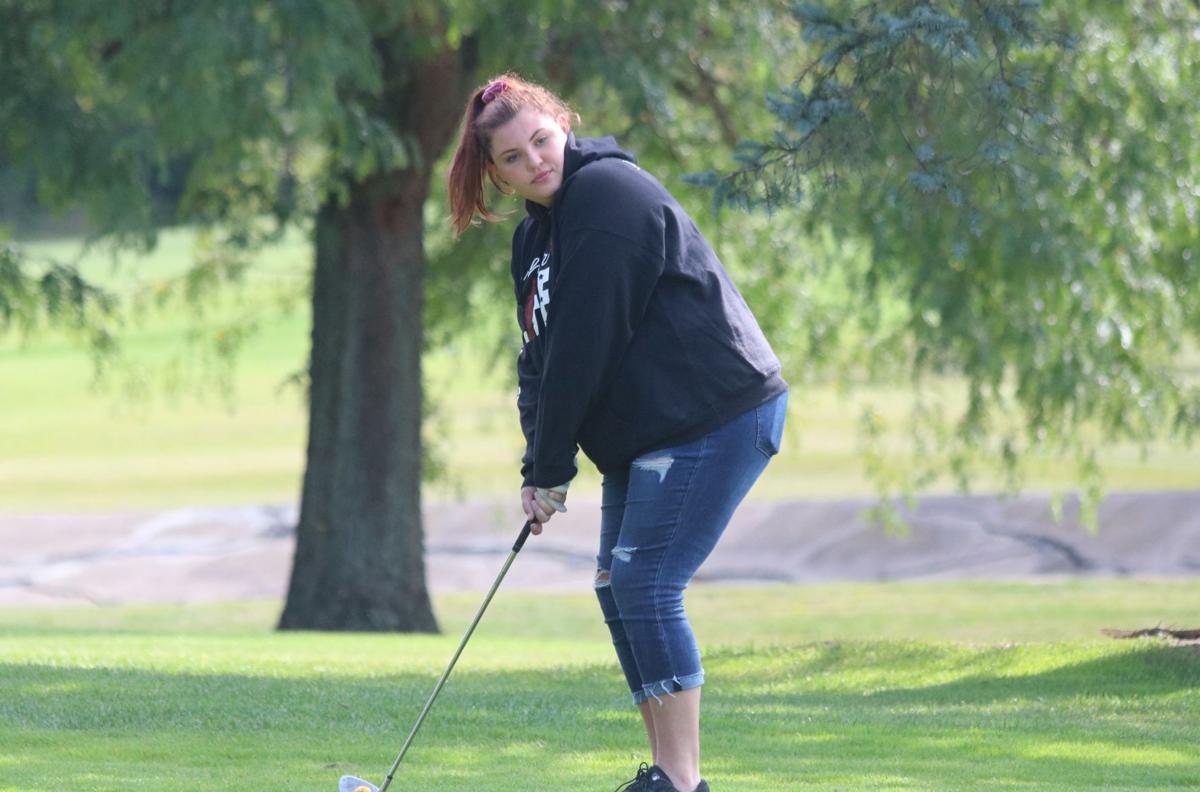 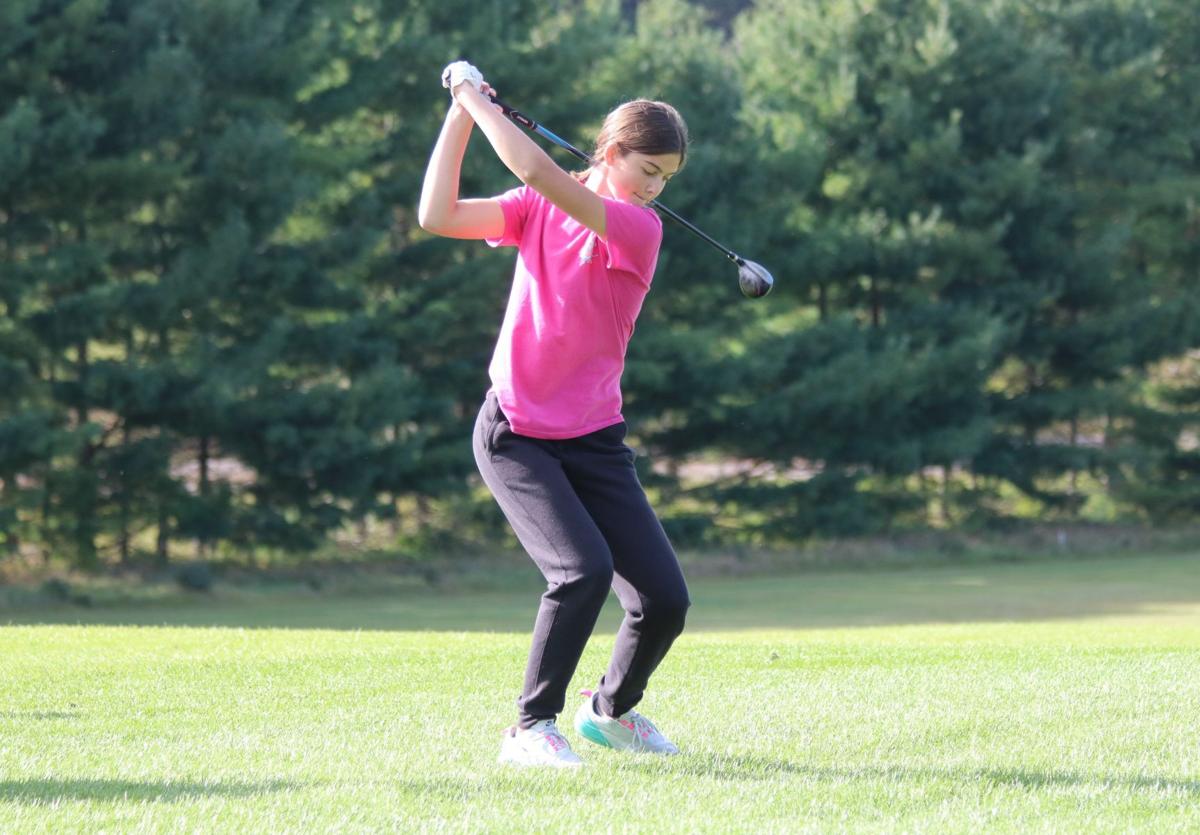 Colfax/Elk Mound's Josie Seehaver goes into her motion during a practice on Thursday at Whitetail Golf Course in Colfax. 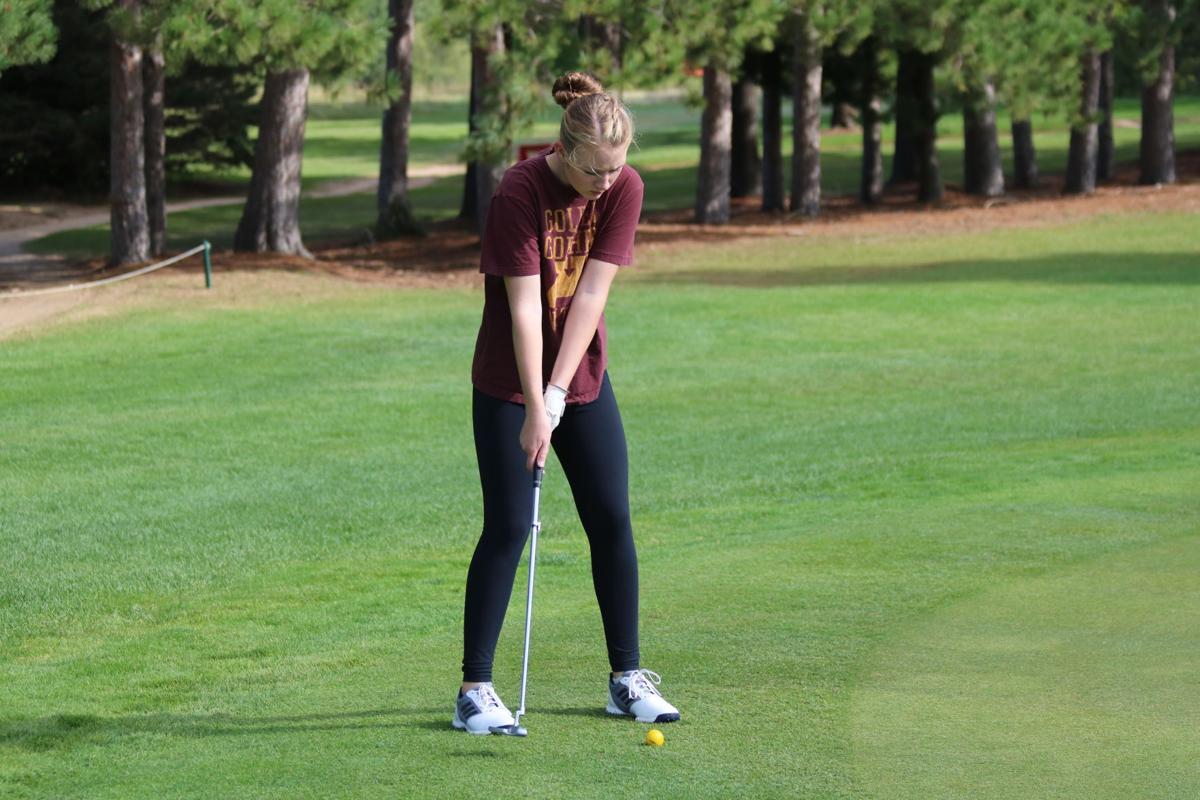 Colfax/Elk Mound's Livi Schindler putts during a practice on Thursday at Whitetail Golf Club in Colfax. 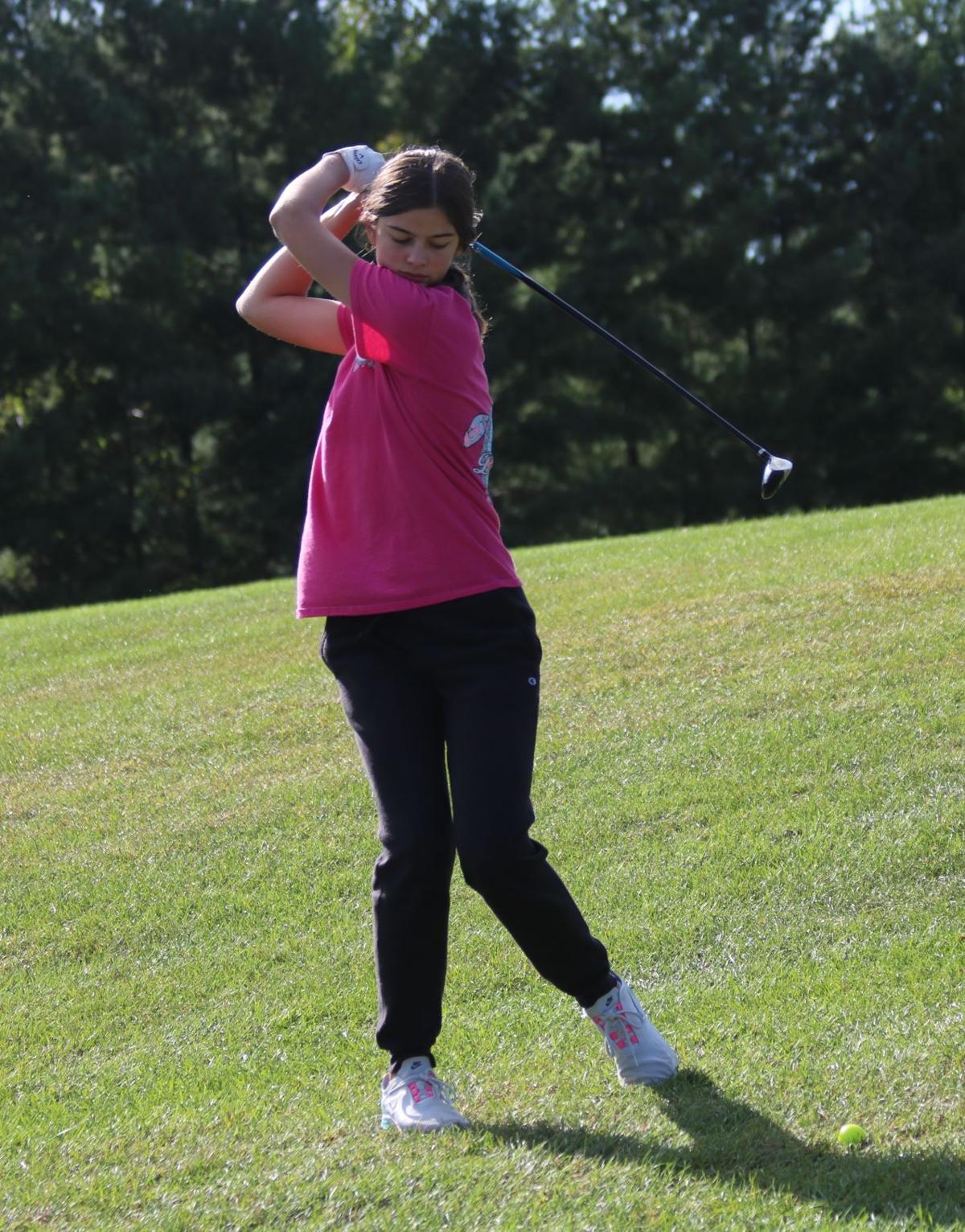 Colfax/Elk Mound's Josie Seehaver goes into her motion during a practice on Thursday at Whitetail Golf Course in Colfax.

Colfax/Elk Mound's Livi Schindler putts during a practice on Thursday at Whitetail Golf Club in Colfax.

For more information on the area's prep girls golf teams, see page 3B.

COLFAX — The coronavirus pandemic has required a restructuring of logistics for prep teams around the area. Schools have a limited amount of buses available, and you can’t just fit as many student-athletes as possible into a van and drive off to a game or practice anymore.

Figuring out safe and sensible travel arrangements requires detailed planning, input from various voices in a district and, often, compromise. It’s tough enough to put together for one school, let alone when the interests of multiple need to be taken into account. Needless to say, this year wasn’t the ideal time to start a co-op.

“It was daunting at the beginning,” said Ryan Krall, who has overseen the merger of Colfax and Elk Mound for girls golf this fall.

Thankfully for Krall and his players, factors worked in their favor. Most of his new golfers from Elk Mound are old enough to drive, and the team’s home course, Whitetail, is an equal distance from both schools. They have been able to get a bus for competitions, and just need to make one more stop than they did previously.

“It was quite a year to go ahead with this thing, but I’m glad at this point that we did,” Krall said.

And now, students from two schools that have had their fair share of memorable battles are working together.

“In other sports we play as rivals,” said Hannah Lemler, the squad’s lone senior and one of the returning Colfax players. “Now we’re this co-opped team. We’ve actually bonded pretty well. At first I think we were a little nervous that we weren’t going to get along, but I think we get along pretty well.”

There’s no need to let school pride get in the way of making new friends after months of isolation while learning remotely, after all.

“It was a couple days and they were already splitting off and playing with kids from different schools,” Krall said. “It’s like they’ve known each other for forever now.”

This year’s squad is predominately made up of Mounders, featuring seven players from Elk Mound and three from Colfax. The Vikings have fielded a team for seven years, getting since-graduated Abby DeMoe to the state tournament each of the last four, while Elk Mound girls golfers previously had to suit up with the boys.

Ella Reese was among the Mounders who golfed with the boys. She found out about the co-op formation in March and, after some initial worries a fall season wouldn’t be played, has appreciated the chance to compete with an all-girls squad.

“You don’t have to stand there and have the boys wait for you to tee off, cause they tee off at a different (tee box),” said Reese, a junior. “It’s the same pace, you don’t have differing scores based on how hard you can hit the ball.”

And, after playing as a team of four last year, more players means added competition for the Colfax returnees.

This year the team has golfed entirely against fellow members of the CloverCroix, a conference consisting of Colfax/Elk Mound, Flambeau, Osseo-Fairchild/Fall Creek, Regis/Altoona and Stanley-Boyd. Just last week, the players learned there’s more to play for after the conference championship, which is already less than two weeks away.

The WIAA won’t be able to put on the girls golf state tournament at its usual home, University Ridge in Madison, but WIAA assistant director Tom Shafranski told Wisconsin.Golf Wednesday that the governing body still intends to go forward the event. State will instead be played at Blackwolf Run in Kohler, a course Krall said is just as good if not better than University Ridge.

He made sure all his players were aware of the news before practice Thursday at Whitetail.

“I didn’t think we were even going to have a regular conference, so that was exciting to find out,” Lemler said. “A lot of our invitationals got canceled at the beginning of the season, so I was like, ‘We’re probably not going to be able to go where we normally do.’”

Instead, the sport perhaps the most equipped to play on during the pandemic will have a postseason.

“We didn’t want to be done in two weeks,” Krall said. “Even if it’s just getting one extra week out of it, it’s still valuable to them.”

The WIAA previously voted to make decisions on fall postseasons and potential culminating events 30 days before they are scheduled. State girls golf is slated for Oct. 12 and 13.

Shafranski told Wisconsin.Golf he expects the change in venue to be officially approved during the scheduled WIAA Board of Control meeting on Friday.

A look at the area's prep girls golf teams.