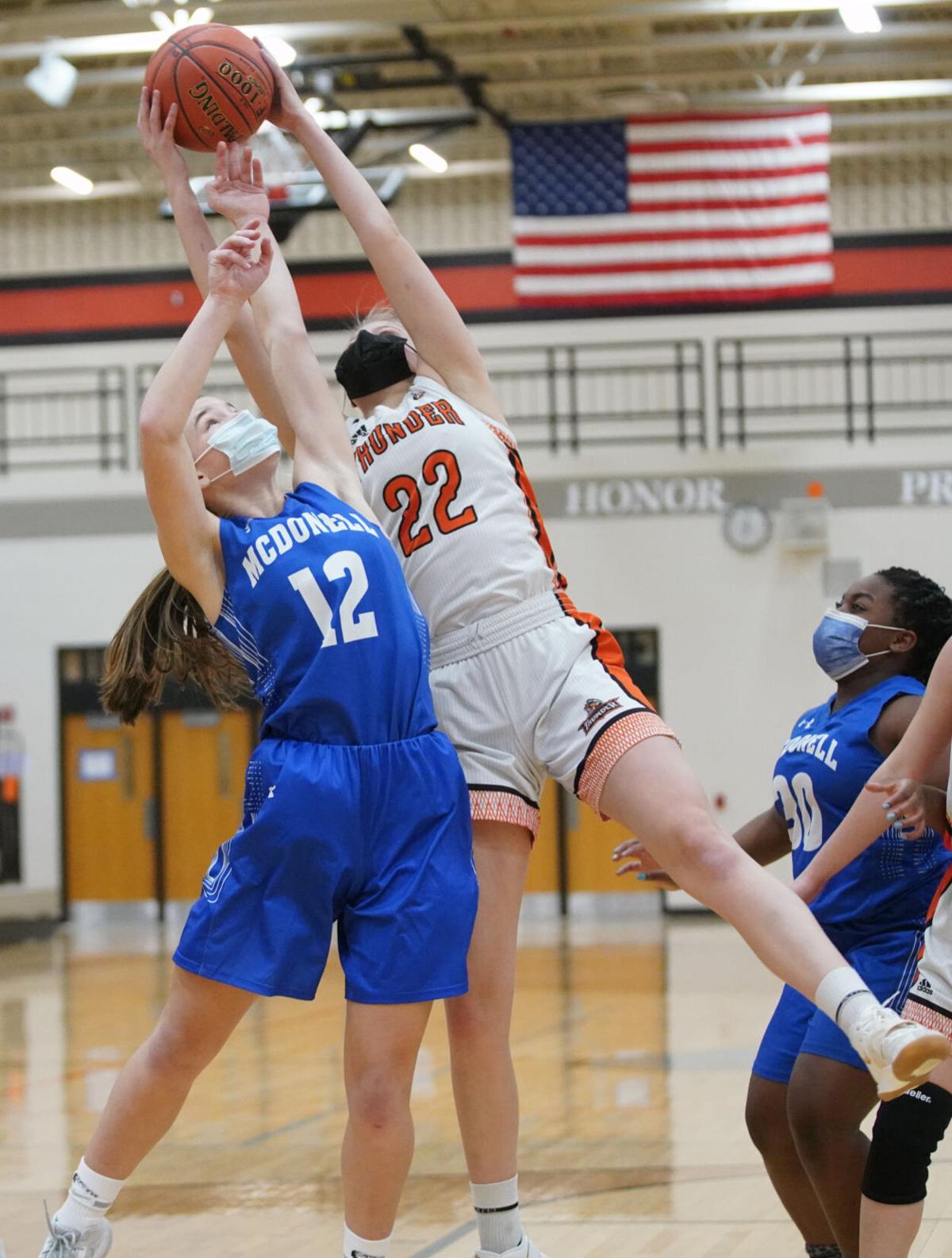 Osseo-Fairchild’s Madison Hugdahl (22) and McDonell’s Josie Witkowski (12) leap for a rebound during a girls basketball game on Monday in Osseo. 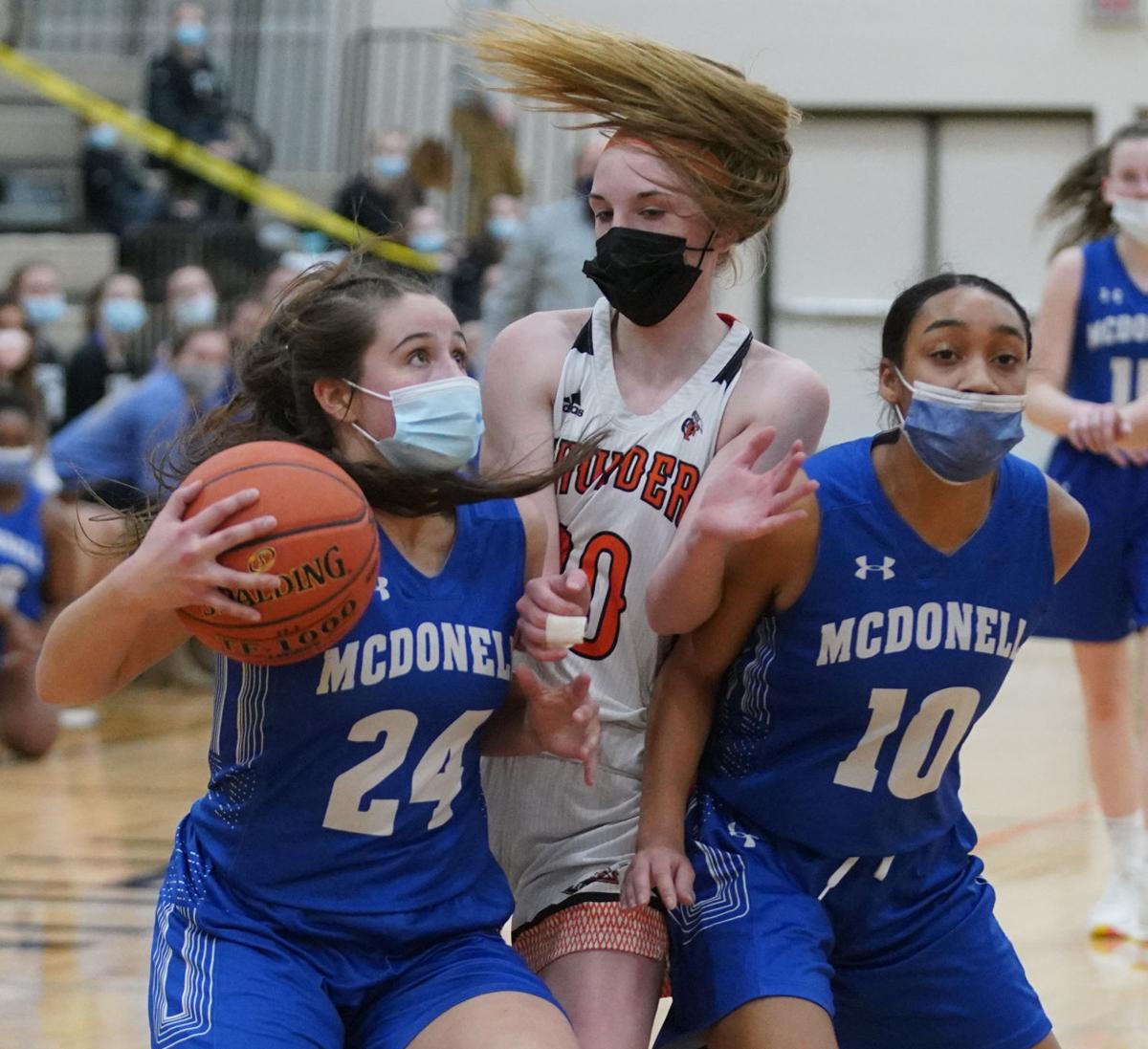 McDonell’s Lauryn Deetz (24) looks for an opening as Osseo-Fairchild’s Eleice Dahl (middle) and McDonell’s Destiny Baughman (10) fight for position on Monday in Osseo.

Osseo-Fairchild’s Madison Hugdahl (22) and McDonell’s Josie Witkowski (12) leap for a rebound during a girls basketball game on Monday in Osseo.

McDonell’s Lauryn Deetz (24) looks for an opening as Osseo-Fairchild’s Eleice Dahl (middle) and McDonell’s Destiny Baughman (10) fight for position on Monday in Osseo.

OSSEO — Osseo-Fairchild wants to control its own destiny.

That goal makes matchups like Monday’s duel with McDonell all the more important. But if the Thunder girls can continue to play like they are, they’ll be well on their way to hitting their mark.

Osseo-Fairchild, the defending Western Cloverbelt Conference champion, took an early step toward another potential title by defeating the Macks 54-47. The matchup pitted the first-place Thunder against a young McDonell team which sat tied for second place in the league.

To become a conference champion, these are the kind of games that teams circle on the calendar. And for unbeaten Osseo-Fairchild, it’s so far, so good.

“It’s so big, because we tend to get this far going 7-0 or being undefeated and there’s always that one team that we end up losing to,” Thunder senior Madison Hugdahl said. “Then we have to hope this team loses and this team will win. So honestly, this was really exciting for us. It really gives us that push to keep this going through the second half of the conference (season).”

Second- and third-chance points gave Osseo-Fairchild (8-0, 7-0) all the opportunities it needed to capitalize.

“Osseo’s such a great team, and they’re well-coached,” McDonell coach Don Cooper said. “It came down to rebounds.”

The two squads were polar opposites, with McDonell (6-3, 4-2) doing a big chunk of its scoring from outside and Osseo-Fairchild scoring only inside the arc. When the Thunder had the ball, the offense flowed through the post and presented several chances for offensive rebounds.

McDonell, meanwhile, hit four 3-pointers in the first half compared to just one 2-point field goal. The Macks finished with nine makes from beyond the arc.

In the end, Osseo-Fairchild’s style won out.

Brooke McCune led the Thunder with 18 points, and Hugdahl and Eleice Dahl added 10 each. Anna Geissler had a team-high 12 points for the Macks, who saw one of their leading rebounders — Abigail Petranovich — miss time with foul trouble.

“You take Abigail out, who’s been averaging double digit rebounds ... when she fouled out, we just did a poor job of rebounding,” Cooper said. “And all these back-to-back games are really taking their toll, but we battled. I was very proud of the team and the way we played tonight.”

Despite going scoreless for a stretch of nearly seven minutes toward the end of the first half, McDonell mounted a rally to take the lead midway through the second. The Macks made four 3-pointers in the first six minutes of the second half to surge ahead 32-31, but the Thunder responded with a 9-0 run to seize the lead for good.

“We face a lot of teams in this conference that tend to use their post, so (seeing so many 3-pointers) definitely makes it more challenging after they make a few on us,” Hugdahl said of the Macks. “But all around, each one of these girls has worked so hard on defense that it’s just become a thing for us.”

The win meant the Thunder opened up a game and a half lead atop the Western Cloverbelt. Fall Creek sits alone in second at 5-1.

Osseo-Fairchild won the league by two games over the Crickets and Macks last season. While Monday’s win was another step in the right direction, the Thunder aren’t getting ahead of themselves.

“We’re obviously not content with it, we still have to push through (seven) more games,” Hugdahl said. “We’re really ready to just go hard and (go) 10 times harder than we did this first half, because we know there will be more energy and more competition.”