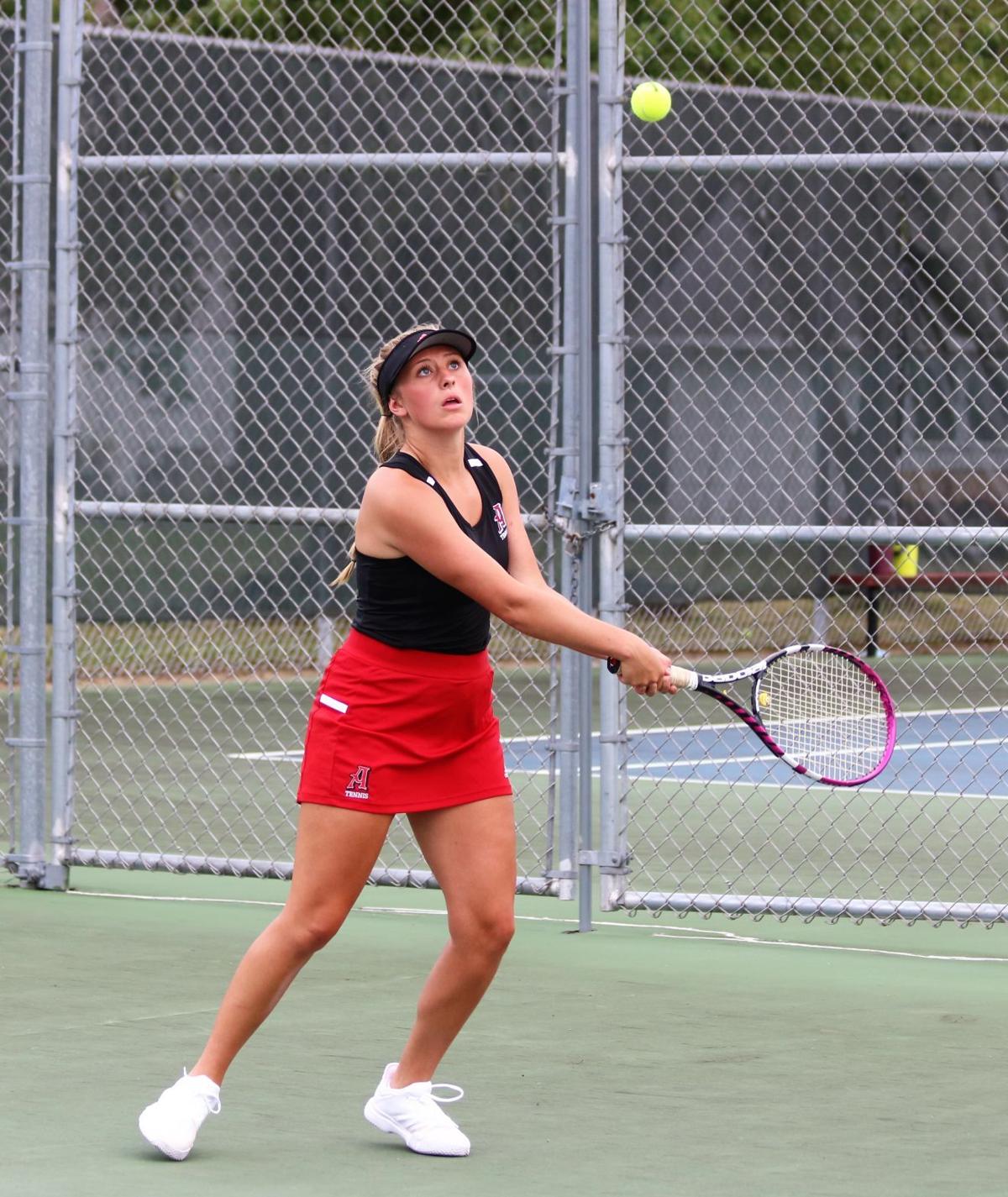 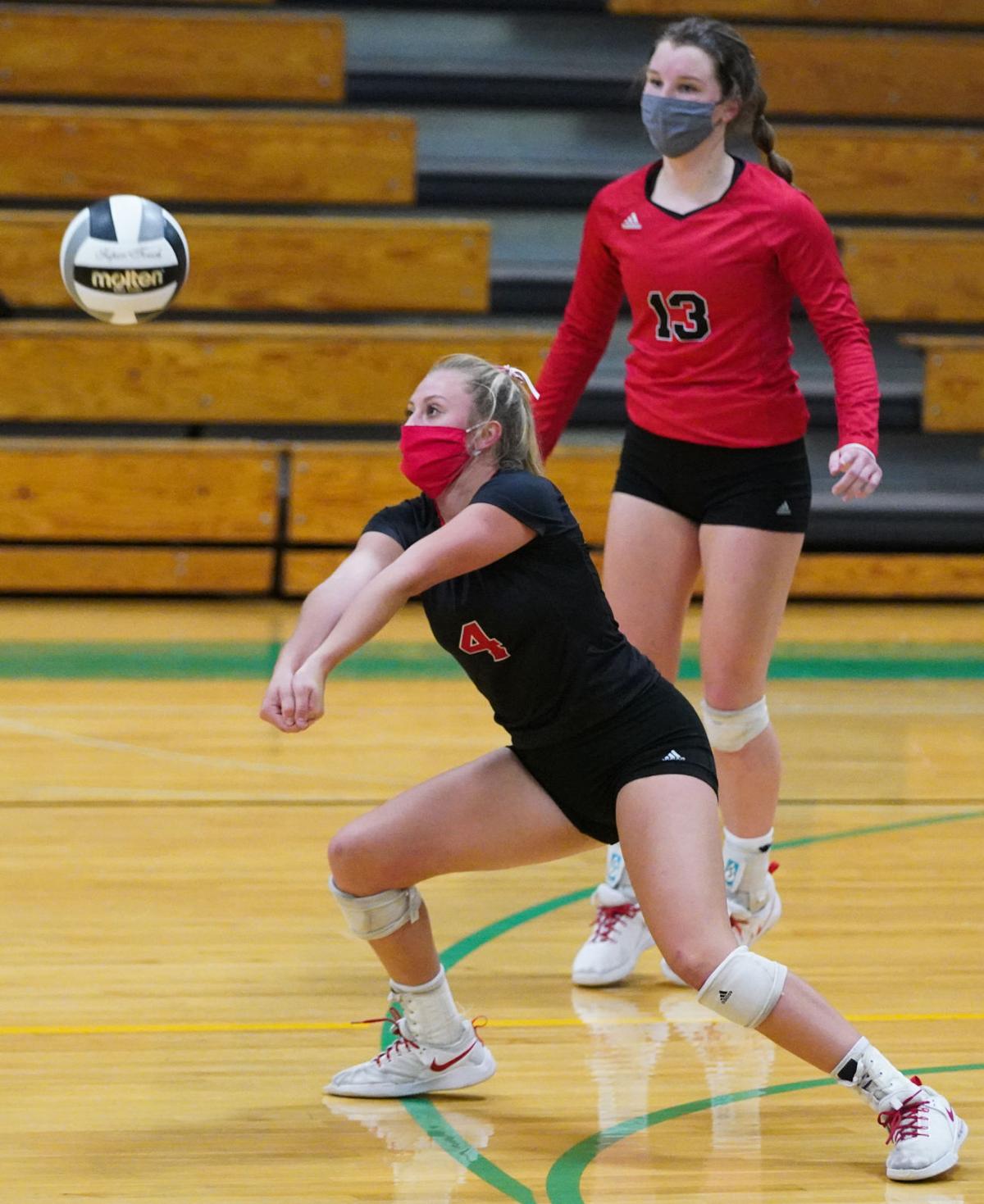 Altoona's Averie Varsho looks to make a pass while teammate Mya Martenson looks on during a match against Regis on Thursday at Regis. 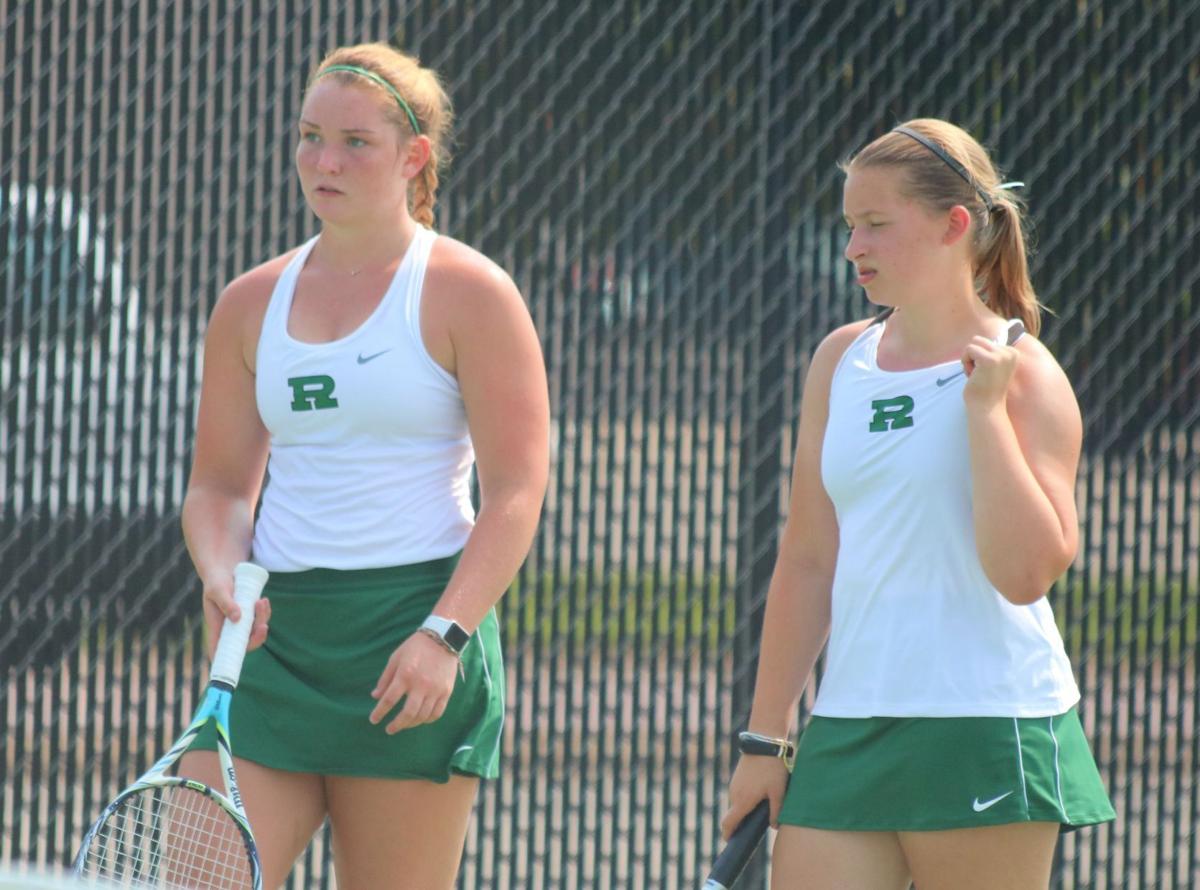 Altoona's Averie Varsho looks to make a pass while teammate Mya Martenson looks on during a match against Regis on Thursday at Regis.

ALTOONA — Averie Varsho’s tennis experience was limited to a few camps in middle school prior to this fall. But with the status of the volleyball season up in the air due to the coronavirus pandemic, she decided it’d be best to pick up one of the WIAA-deemed low-risk sports in August just in case. She knew her best friend Ally Wagner had lost her doubles partner on the tennis team, so she figured she might as well try to step into the role.

“If you were to ask me two weeks ago if I would be in the state tournament, I’d be like, ‘What are you talking about?’” Varsho said Tuesday during her final practice before travelling to Kohler for the tourney. “I had no clue.”

Varsho and her partner Wagner, who made it to state last year with Kate Harris, are two players in a large contingent of locals set to compete in the girls tennis state tournament starting Thursday. Also making the trip for the Rails is Morgan Dekan, who in singles earned one of eight seeds in her fourth appearance at the tournament.

So what’s working in Varsho’s favor to make this such a smooth transition?

Altoona coach Greg Emerson said her tenaciousness built through playing volleyball, basketball and softball has translated well. He commended her willingness to go after the ball, especially around the net. He saw the same drive from Wagner last year, who also made state in her first year playing tennis.

There were times Varsho had to learn to pull back – “Obviously you can’t let the ball drop once in volleyball, so I had to learn you can let it bounce,” Varsho noted – but her mentality helps her more often than not.

“Her strong suit is her feet don’t stop moving,” Emerson said. “She just wants that ball. She doesn’t want to back down from it, nor does the Ally. They’re fearless. That’s what makes them so dangerous.”

“She’s good at everything she does, so I wasn’t surprised she was good at this,” Wagner added. “Her work ethic is amazing and she’s always trying to be the best she can be.”

Her connection with Wagner has also made for a quick adjustment. In addition to being good friends, the pair also work together as pitcher and catcher on the Altoona softball team. Wagner had the same dynamic with Harris, her doubles partner last year.

“There’s just that chemistry and athleticism that you can’t really teach,” Emerson said. “They just have that bond. They trust each other and they know they’ll get it done. When one gets knocked down, the other one picks them up. It’s been like that through the whole season.”

Varsho said the two didn’t have enormous expectations going into the postseason considering her novice status. But then the duo won their first matchup at subsectionals and began to wonder just how far they could go.

They finished second in the sectional to punch their state ticket.

“It just shows you the athleticism these girls have,” Emerson said.

Volleyball is being played this fall, meaning Varsho has split time between two teams over the past month. She’s had to miss some practices, and some days have featured her going to an afternoon tennis practice and then right to an evening volleyball match. She luckily hasn’t had to miss a single competition for either team.

“It’s been a lot of communication,” Varsho said. “It’s been great though because my teammates are so supportive of it. ... I’m just where I need to be every time.”

Varsho and Wagner will play Roncalli/Two Rivers’ Erin Schermetzler and Ashlyn Dellemann in the first round Thursday at noon.

They’ll be joined in Kohler by Dekan, the first player in program history to make four trips to the state tournament. She earned the seventh seed and will play West Salem’s Madigan Freng, who she previously beat during sectional competition.

“It’s a great start to the state tournament,” Emerson said of Dekan’s seed. “We’re hoping to do some damage down there.”

Regis earned a spot in the team state tournament, which begins on Oct. 24, but also has players competing in the D2 individual tournament. Arianna Smith will battle Aquinas’ Fiona O’Flaherty in the first round of singles, while the doubles duo of Adrienne Morning and Teigan Petersilka will face Rice Lake’s Paige Diercks and Lexington Berger in an all-local matchup. Rounding out the Rambler representatives are doubles partners Caitlin Klink and Evie Shepich, who will meet Pacelli’s Ella Schroeder and Marissa Stolt.

Rice Lake has one other state competitor in Alexa Robarge, who will play Waupun’s Alysa Pattee. Barron’s Jada Brunkow and Phoebe Jerome are one of eight doubles pairings that earned a seed, slotting in at No. 4. They earned a bye and will face either Edgewood’s Samantha Buchner and Maeve Shanahan or Aquinas’ Amelia Topolski and Morgan Thill in the second round.

Hudson is well represented at the event. In addition to Jonas, the Raiders have another singles player in Lily Holmberg and two doubles pairings (Jordan Yacoub/Livi Boily and Kira Young/Grace Lewis).

The D1 and D2 tournaments will be held at different locations this year. While Altoona and the D2 players are heading to Sports Core Health and Racquet Club in Kohler, the D1 competitors will play at Lake Geneva Tennis.

It will be a new experience for Varsho, but thankfully she’ll have someone with state experience alongside her.

“I never thought I’d be going to state in a sport that I never played in the first three years of my high school career,” Varsho said. “So it means a lot. And definitely to go with Ally, it means so much more.”