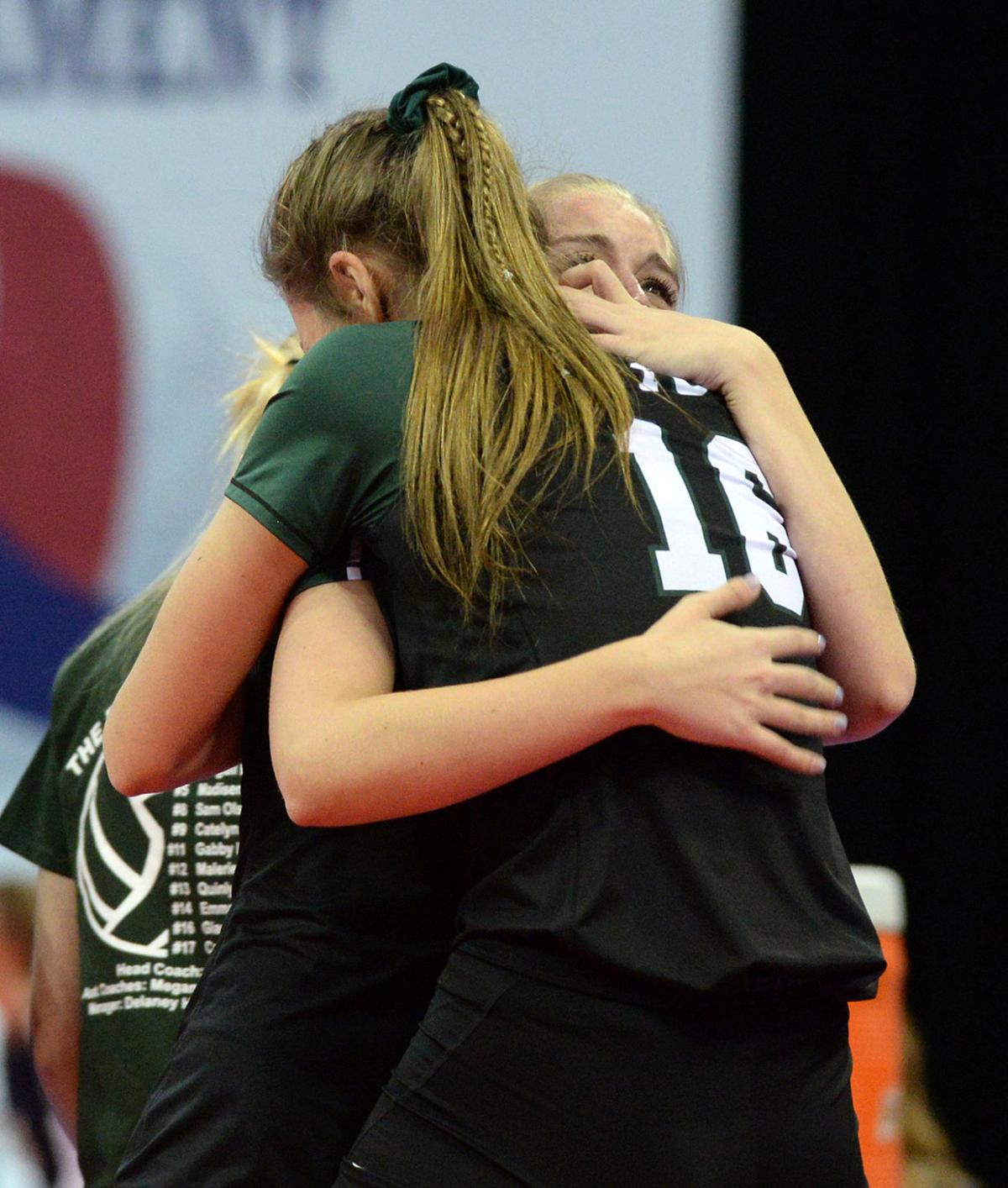 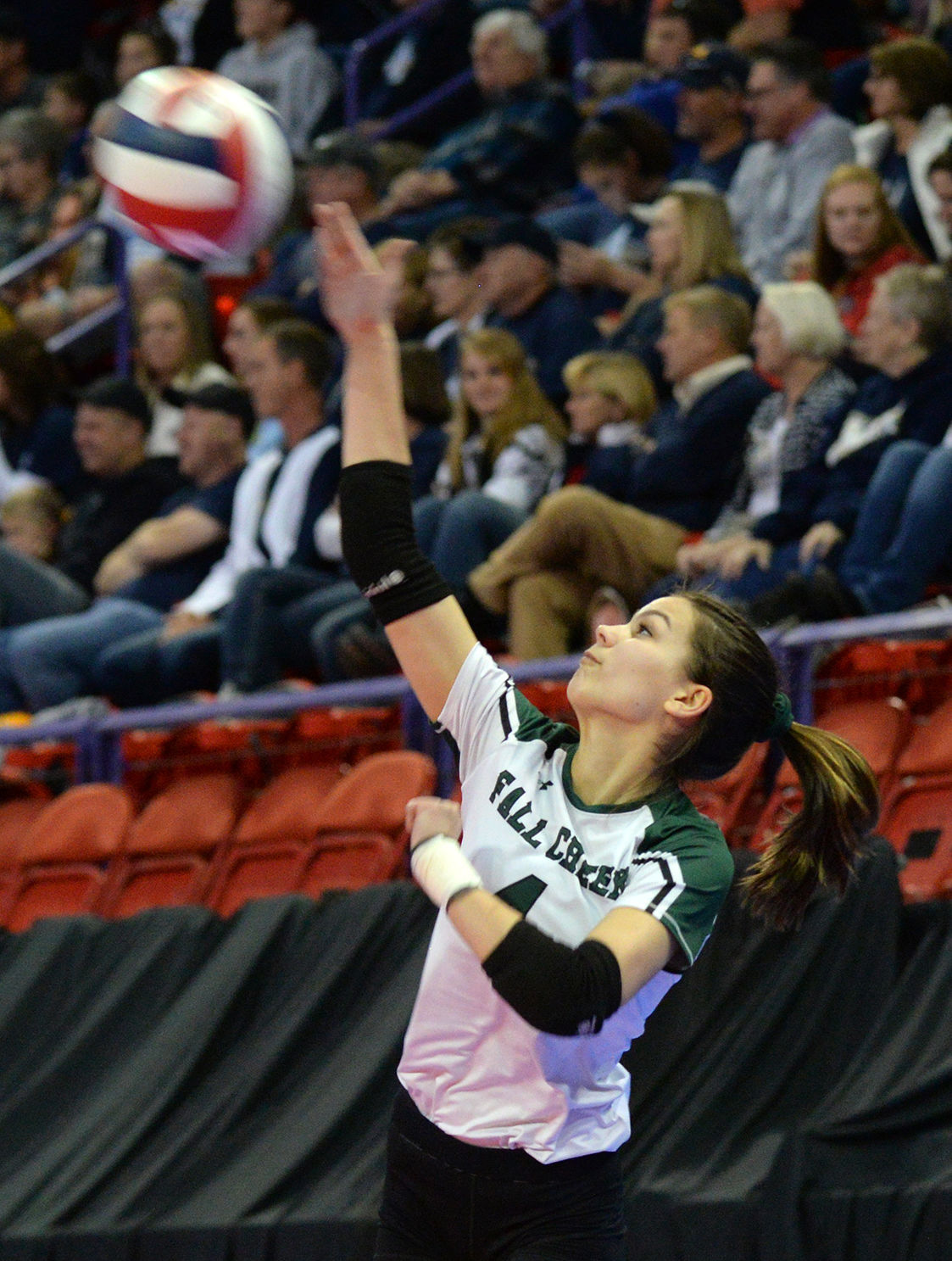 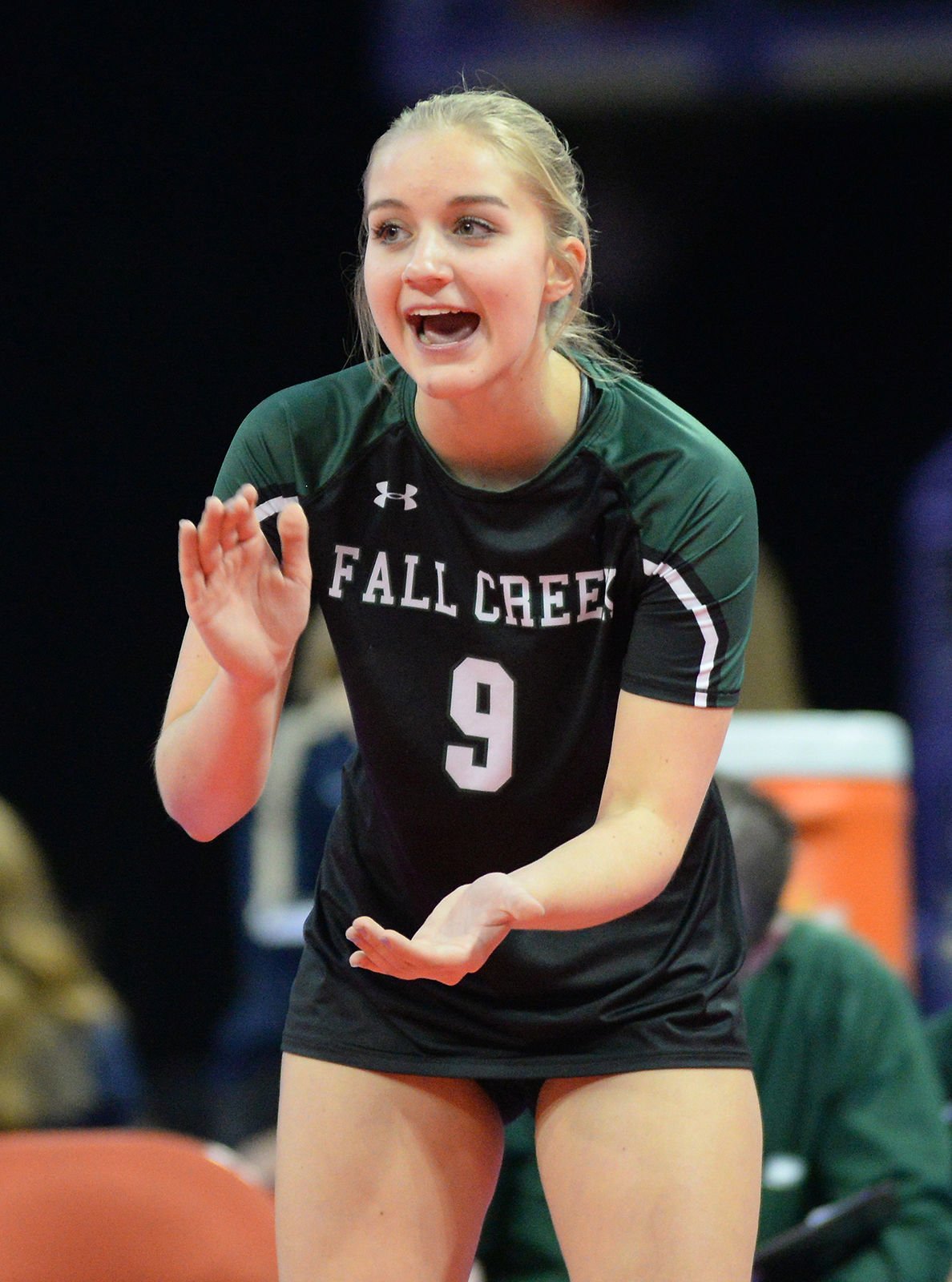 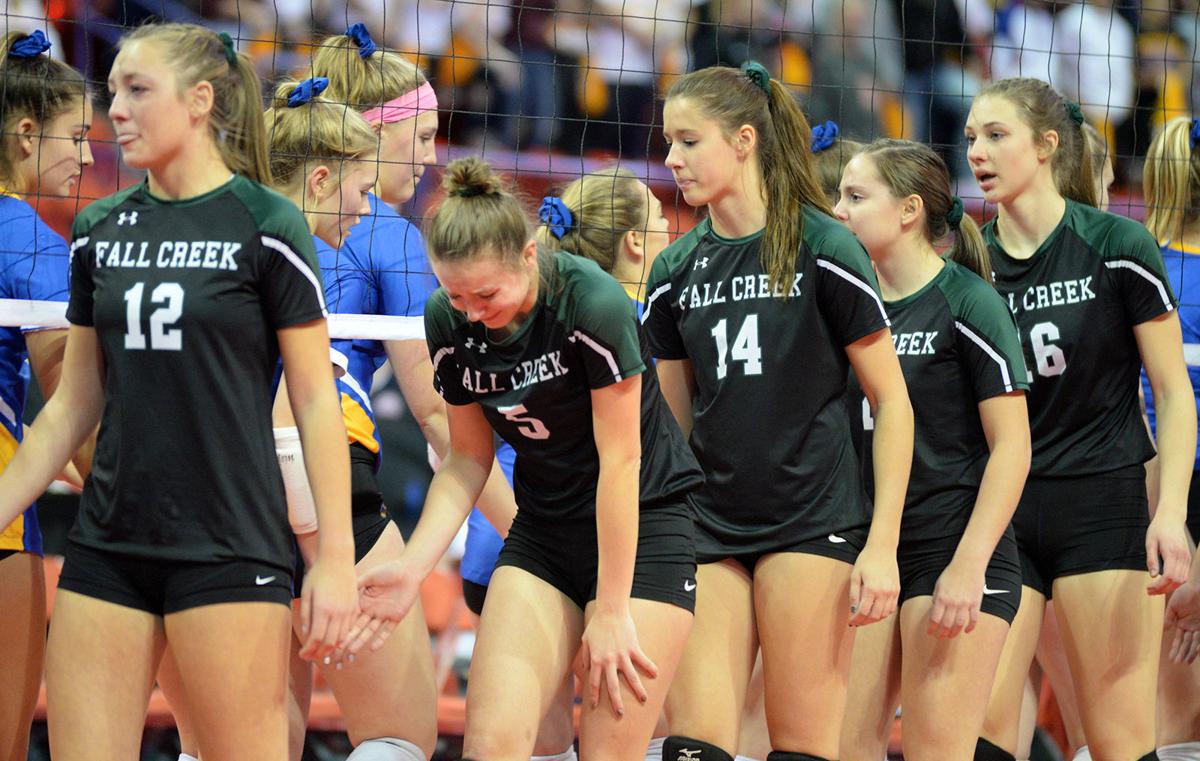 Fall Creek senior Madisen Johnson (second from left) reacts at the conclusion of a WIAA Division 3 state volleyball semifinal game against Howards Grove at the Resch Center in Green Bay. 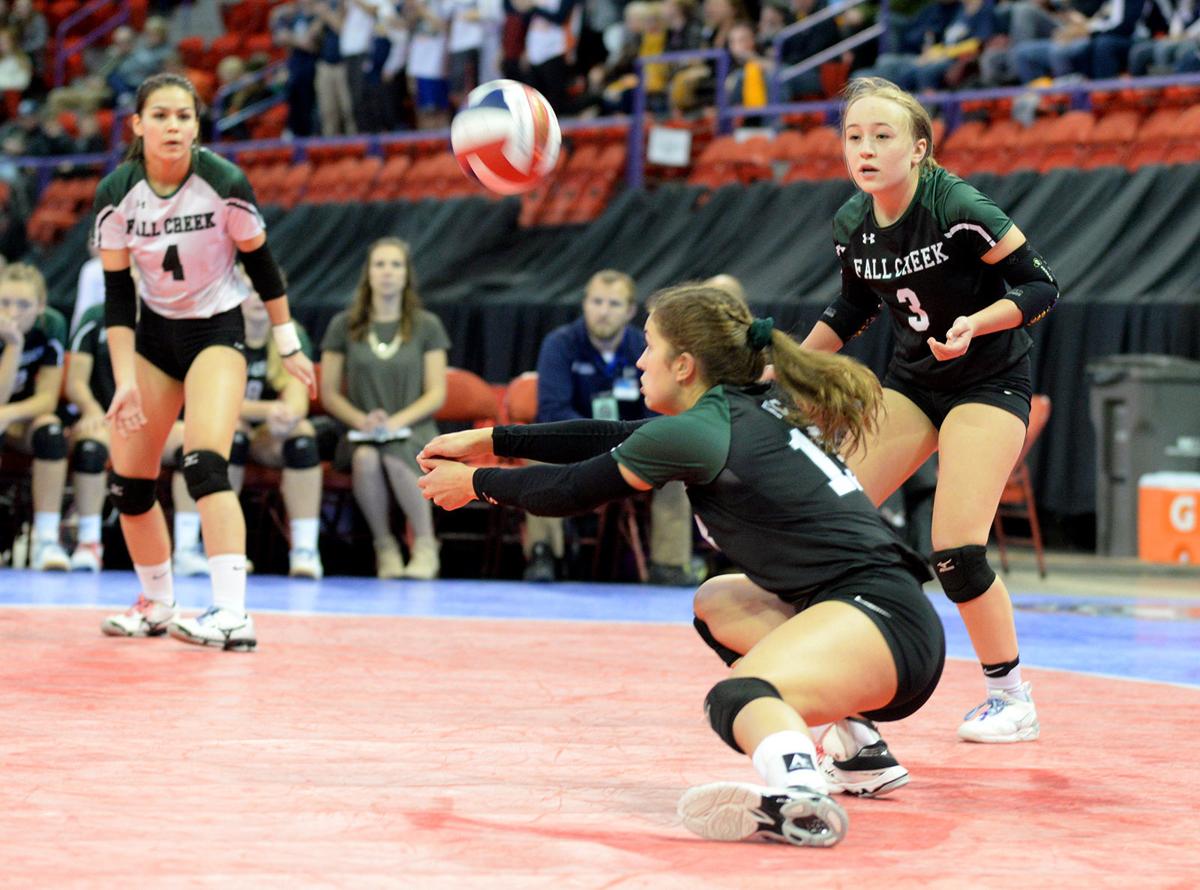 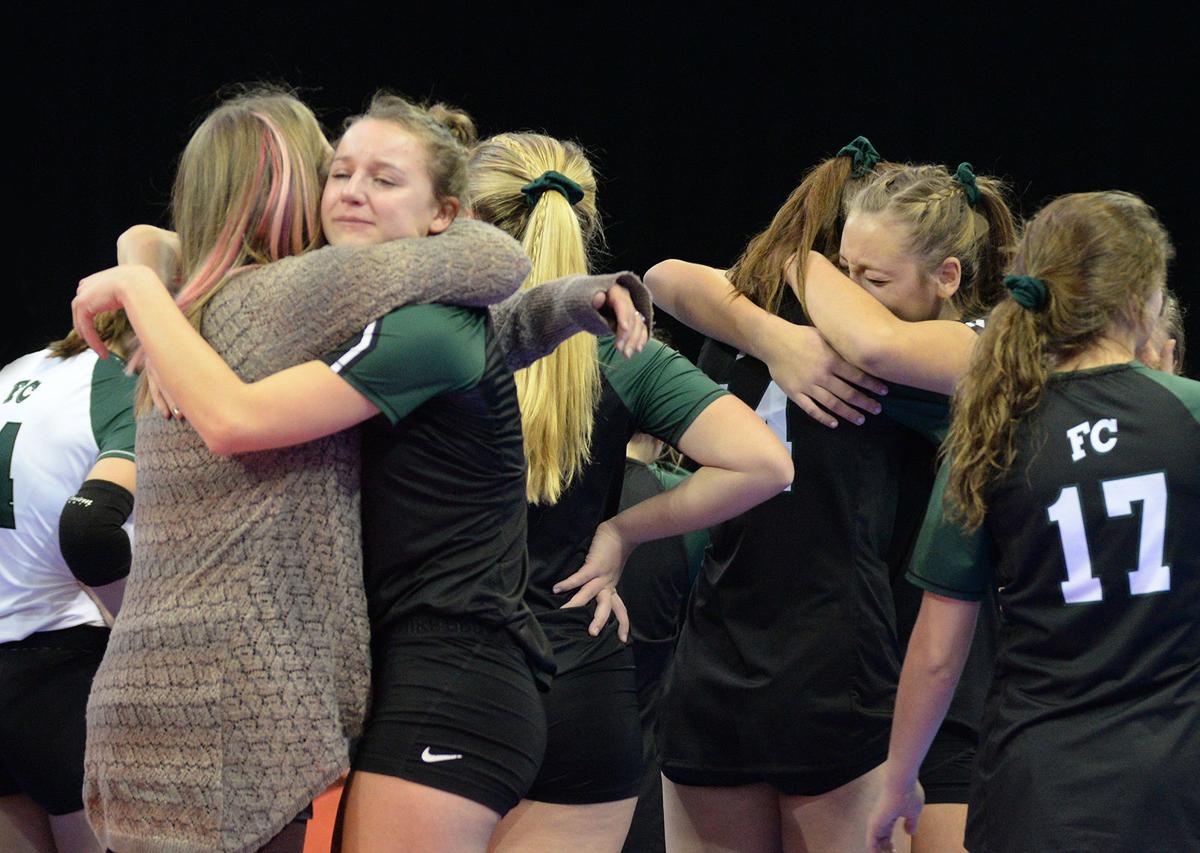 Members of the Fall Creek volleyball team console each other at the conclusion of a WIAA Division 3 state semifinal game against Howards Grove at the Resch Center in Green Bay.

Fall Creek senior Madisen Johnson (second from left) reacts at the conclusion of a WIAA Division 3 state volleyball semifinal game against Howards Grove at the Resch Center in Green Bay.

Members of the Fall Creek volleyball team console each other at the conclusion of a WIAA Division 3 state semifinal game against Howards Grove at the Resch Center in Green Bay.

“We’ve watched film on them and we’ve been following them all year, and we knew they were ... a Murderers’ Row,” said Prissel, using a term most often associated with the hard-hitting New York Yankees lineup of the late 1920s.

And what did Prissel think after watching first-hand as the No. 1 seed Tigers beat his No. 4 seed Crickets 25-11, 25-15, 25-7 on Friday in the WIAA Division 3 state semifinals at the Resch Center?

“I don’t think I would change that phrase at all,” he said. “They were a legit outfit. To quote one of my mentors ... ‘Slap me if I’m wrong, but I think that team we just played could probably compete and potentially win a state title in any division.’ Howards Grove is for real.”

Fall Creek, which entered the day riding a 21-match winning streak, finished the season with a 40-4 record. Howards Grove, which features two sophomores and one freshman in its starting lineup, improved to 43-4 and advanced to the state final against Aquinas (31-3).

The Crickets were playing for the first time in the WIAA state volleyball tournament, prompting Prissel to describe his players as “legends in Fall Creek, and that legend status is going to live forever.”

“Even though it didn’t work out for us ... this group of young ladies — who have tears in their eyes right now — I’ve told them I wouldn’t trade them for anything,” Prissel said.

“In Fall Creek, volleyball is going to have a special place for a long time going forward,” Prissel said, “and this group is a special group that helped get it there.”

Rubeck said it was “awesome” to see the squad develop a strong bond throughout the season.

“It’s just been super special, and it’s something I wouldn’t trade for the world,” said Rubeck, who recorded five assists, three digs, one kill and one ace.

Schulz fought back tears while saying, “I’ve spent every day for the past two and a half months with these people ... and I wouldn’t want to spend it with anybody else.”

Schulz finished with five assists, eight digs and one kill.

“Their serving program was fantastic,” Prissel said. “They put so much pressure on us. ... They just are really good at every facet of the game.”

However, none of that changes the way Prissel feels about his Crickets.

“I love coaching them,” he said. “It’s been a heck of a ride. ... Without a doubt this is the highlight of this year. People talk about the best times of their lives. This last two and a half months will rank up there as one of the best times of my life.”