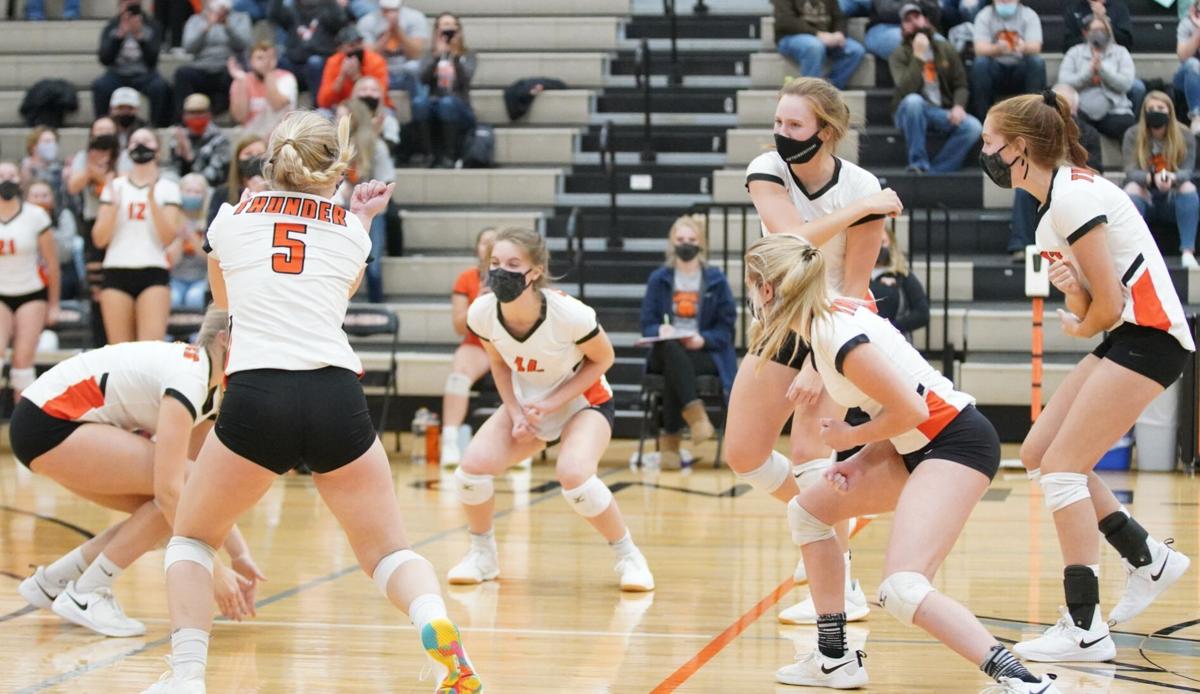 Members of the Osseo-Fairchild volleyball team celebrate during a sectional semifinal match against Mondovi on Thursday in Osseo. 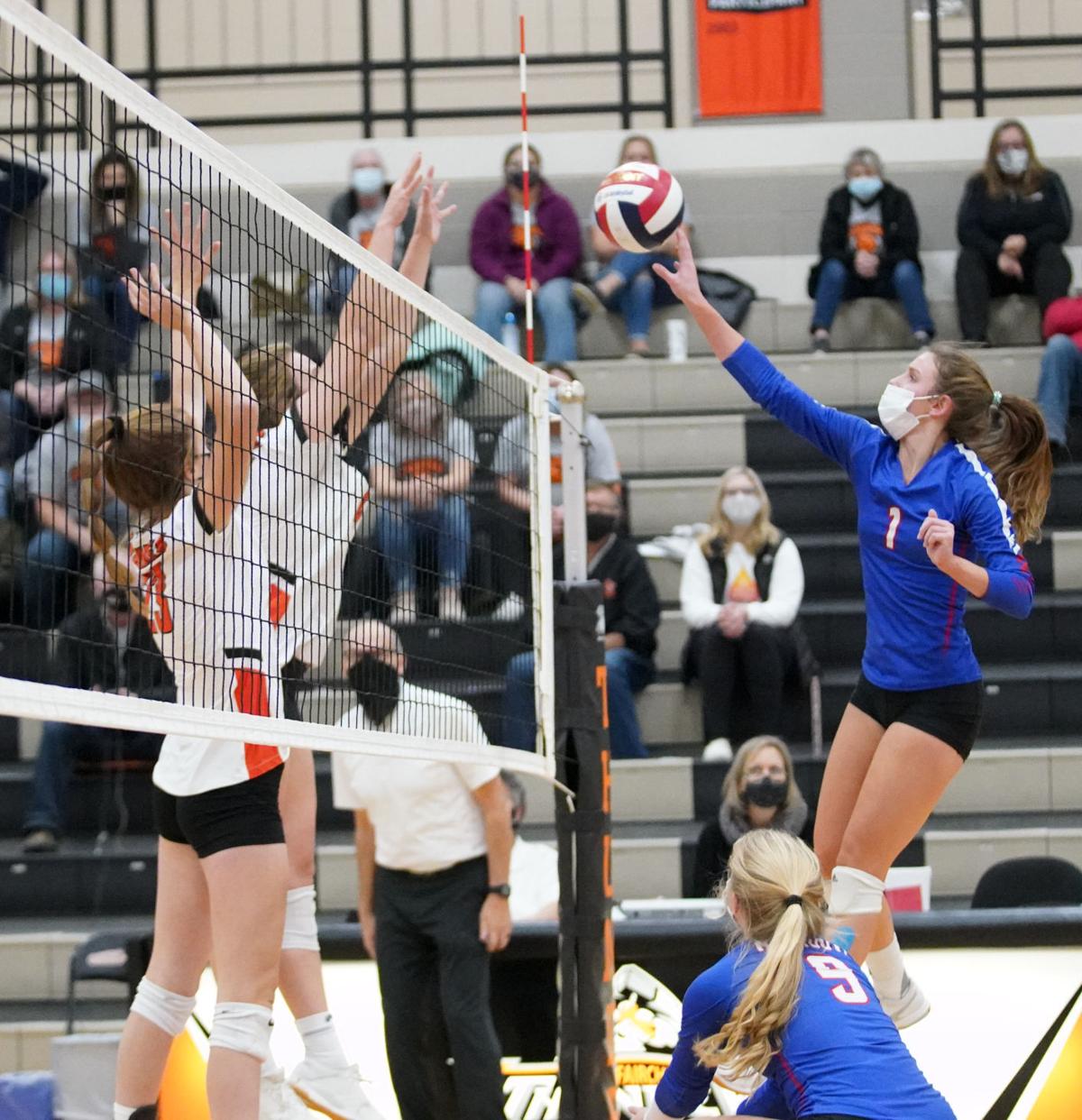 Mondovi's Macayla Thompson taps the ball over the net as a pair of Osseo-Fairchild players defend during a sectional semifinal matchup on Thursday in Osseo. 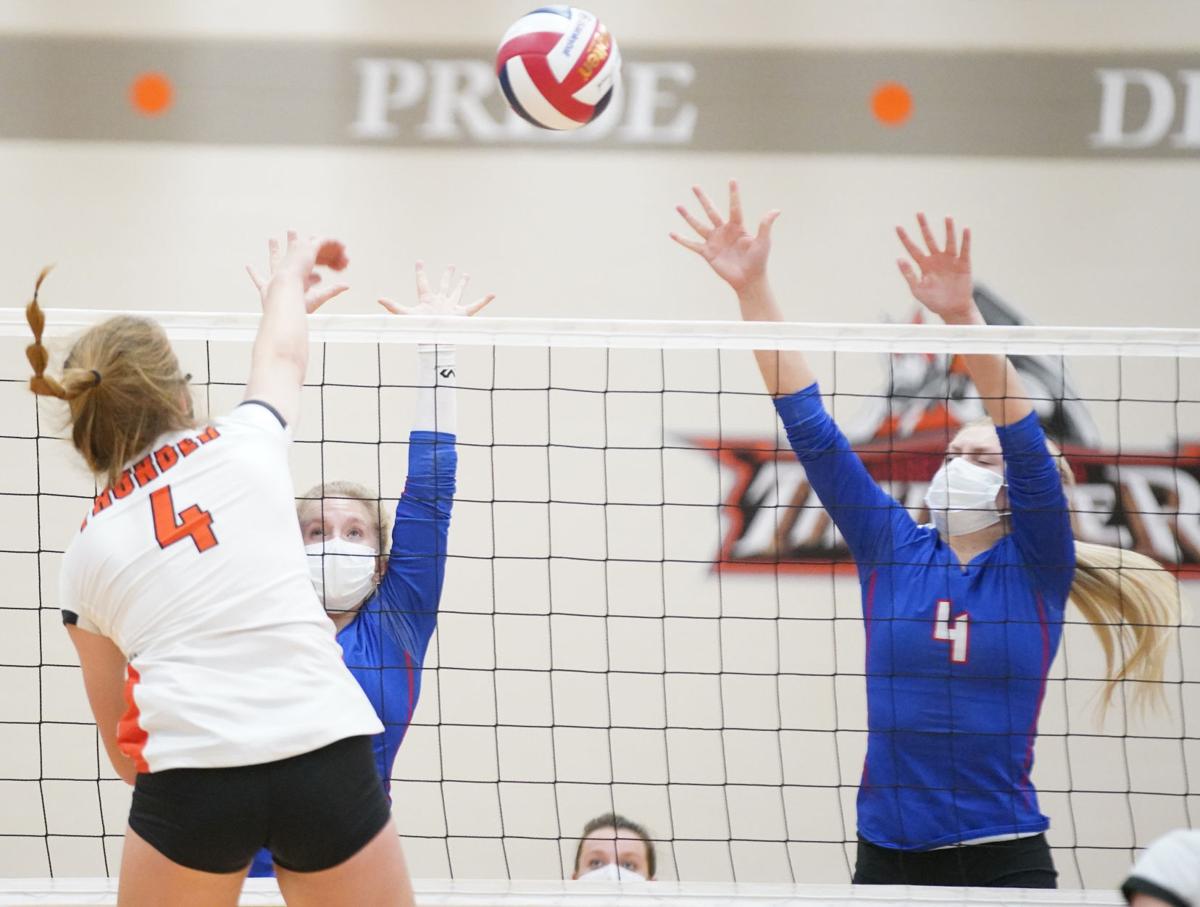 Osseo-Fairchild's Brooke McCune hits the ball over the net while Mondovi's Enny Everson, right, defends during a sectional semifinal match Thursday in Osseo.

Members of the Osseo-Fairchild volleyball team celebrate during a sectional semifinal match against Mondovi on Thursday in Osseo.

Mondovi's Macayla Thompson taps the ball over the net as a pair of Osseo-Fairchild players defend during a sectional semifinal matchup on Thursday in Osseo.

Osseo-Fairchild's Brooke McCune hits the ball over the net while Mondovi's Enny Everson, right, defends during a sectional semifinal match Thursday in Osseo.

OSSEO — After a rude awakening in the first set, the Osseo-Fairchild volleyball team needed a spark.

The Thunder fell behind 23-9 to Mondovi to start Thursday’s Division 3 sectional semifinal and dropped the opening set 25-13. It wasn’t the start Osseo-Fairchild was looking for with a spot in the sectional finals on the line.

“I think in the first set they were just so nervous,” Thunder coach Sharon Steinke said. “Their nerves were taking over, and even their faces looked a little bit scared.”

But coming out of the huddle to start the second set, Osseo-Fairchild looked like a different team. It played like one too. The Thunder won three straight sets to rally past the Buffaloes 3-1 and move to within one win of a state tournament berth.

“We really came with a lot of energy in the last three sets,” Osseo-Fairchild outside hitter Brooke McCune said. “In the first set we weren’t quite ready, and I think we came out a little nervous. But by the second set it was all out and we were playing really well as a team. Everything was clicking.”

Mariah Steinke pummeled 13 kills for the Thunder and McCune added nine of her own in a strong showing at the net all around.

“They could go pretty much anywhere they wanted on the court,” Coach Steinke said of the two hitters. “They do that day in, day out. That’s really key for us, and they’re just really strong outside hitters.”

Mondovi did a good job of keeping the Thunder off balance in the first set, running out to a 10-3 lead to set the tone early.

Macayla Thompson had five kills in the opening set as the Buffaloes threatened to pull away quickly.

But Osseo-Fairchild took 13 of the first 18 points to start the second set, powered by kills from Steinke and McCune along with a couple of aces by Madison Hugdahl.

The nerves were already long behind them, and the Thunder weren’t looking back.

“Once they got the nerves out, they just started playing volleyball,” Coach Steinke said.

The third set was much closer, but Osseo-Fairchild went on a 13-2 run midway through to pull away.

And in the final set, McCune served the Thunder to 14 straight points, effectively clinching the match.

“Everything’s just working,” she said. “We’re just playing really scrappy right now. We want to get to every ball, because we don’t want this to be our last game.”

Hugdahl finished with five aces for the Thunder. Thompson had nine kills for Mondovi, while Avery Falkner added three of her own.

Osseo-Fairchild hosts Cochrane-Fountain City in the sectional finals on Saturday night. The winner is headed to state. A victory would give the Thunder their first WIAA state tournament berth in program history.

Coming into the year, Coach Steinke had a feeling her team was good enough to make a postseason run. Her players didn’t know that it could happen though.

“I know we’ve all wanted to go really far in the playoffs, but I don’t really know that anybody thought (at the start of the season) that we’d make it this far,” McCune said. “It’s really exciting.”

It was just a matter of getting themselves to believe.

“I’ve known all along we have a lot of talent,” Coach Steinke said. “It was really just making them believe they have the talent and build up the chemistry.”