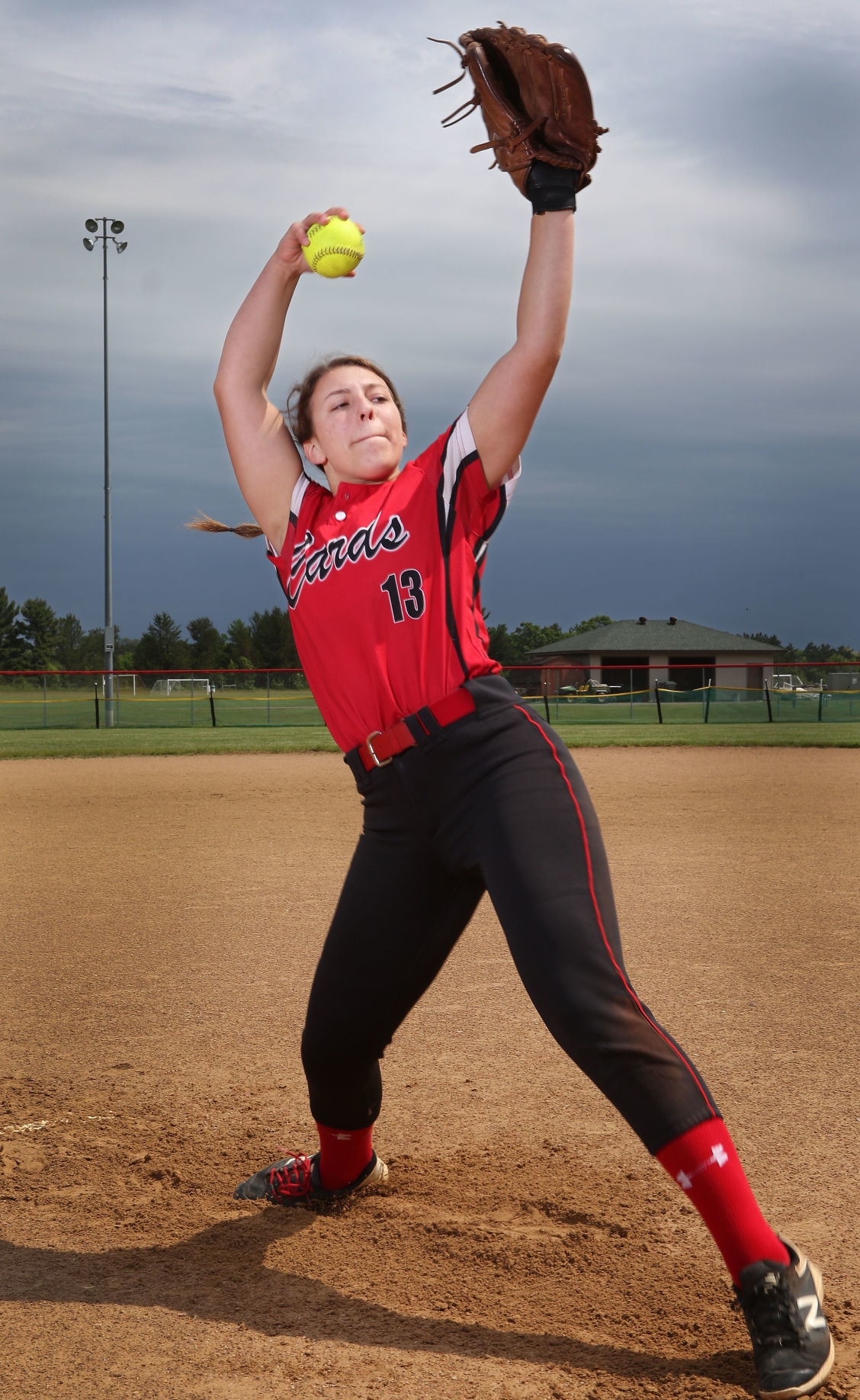 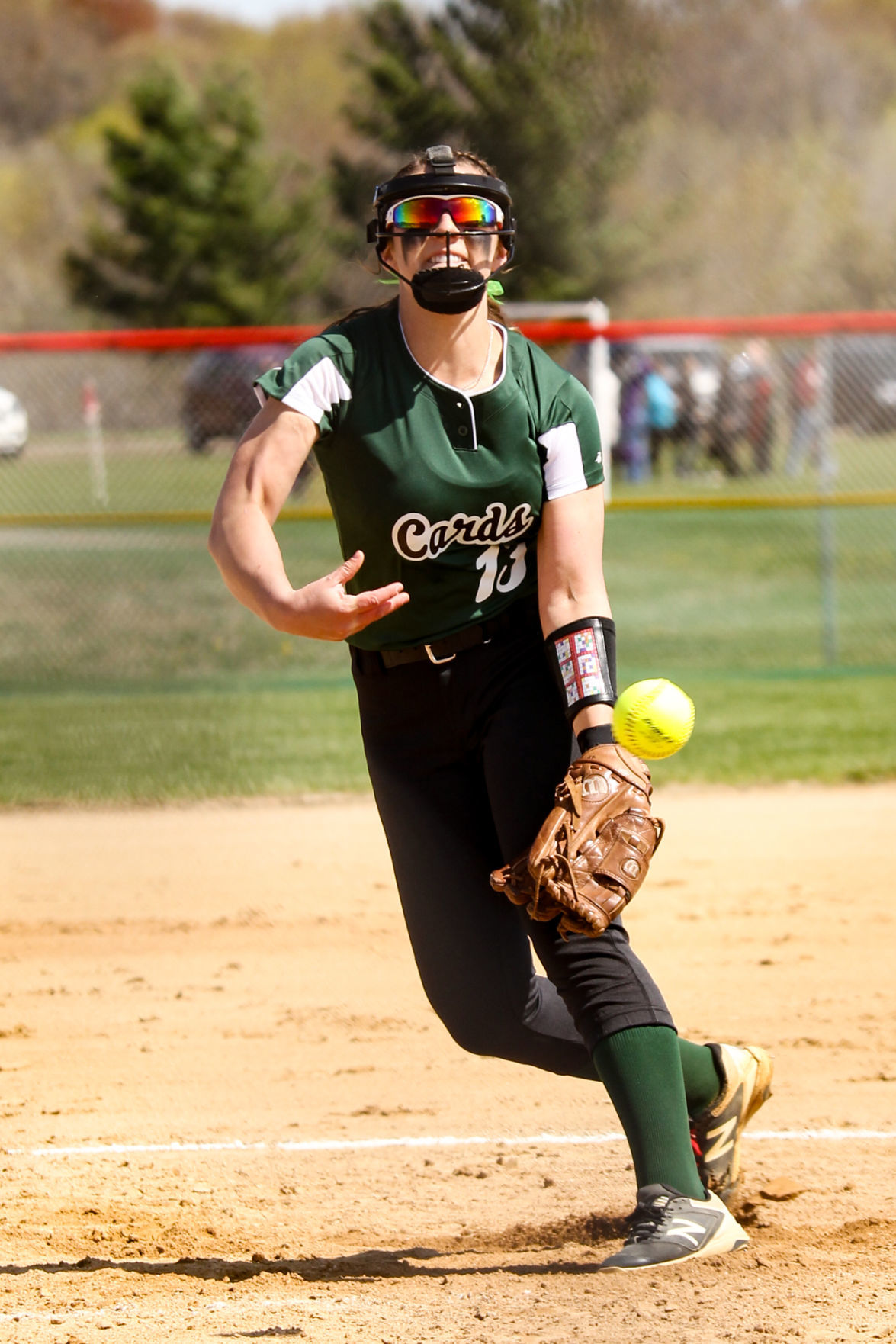 Chippewa Falls' Mallory Sterling throws a pitch on Saturday, May 11, at Casper Park.

Chippewa Falls' Mallory Sterling throws a pitch on Saturday, May 11, at Casper Park.

A concerned Jared Faherty steps out of the Chippewa Falls dugout to check on his pitcher. Julia Baxter has loaded the bases, and now her arm is giving her trouble.

It’s April 14, 2016 and the Cardinals are looking to extend their 67-game conference winning streak, but they’ve hit a bump and Baxter can’t get out of the jam.

With his starter injured, Faherty is forced to turn to his bullpen. He looks toward the dugout and signals for a reliever.

“You could tell she was pretty nervous,” Faherty remembered.

He said he was confident in Sterling, even at such a young age. Faherty has known Sterling since she was 10 years old and he said he knew she was going to be a strong pitcher. For Sterling’s mother, Kristine, the moment was nerve-wracking.

“There’s my little freshman girl standing out there,” she remembered. “I’m like ‘Oh my! Here it goes.’”

With three straight pitches, she retires the batter with a strikeout to end the threat.

“I worked hard, and I’m honored that I got it,” Sterling said.

For four years Sterling has been the Cardinals’ leader in the circle. She’s developed into a power pitcher with command of five different pitches. But it wasn’t always this way.

Sterling remembers a time when she was nine or 10 years old and she couldn’t find the plate.

“I kept throwing it over (my father’s) head,” she said.

But at a Lake Hallie pitching clinic she saw a woman demonstrate pitching in a different way, and it just clicked. From then on, she’s worked relentlessly to improve her game.

Sterling led the Cardinals to a 24-6 record this past season and a trip to Madison, the second of her career. She didn’t just lead from the circle though, She also set the table for the Cardinals on offense, batting in the leadoff spot.

Her offense is often glossed over because of her dominant arm, but she came up huge in the batters’ box multiple times this season. Few moments compared to what she did against Superior in the WIAA regional finals this past year.

“They had a pitchers duel going there,” Keith Sterling, Mallory’s father, remembered.

After five innings of deadlock, the Cardinals’ No. 9, Hannah Aldrich, hit a two-out double to flip the lineup and bring Sterling to the plate.

“I was like, ‘OK, I just need to make contact and pop one out there,’” Sterling said. “Then, she threw one and I knew it was a good one.”

Keith, who is normally fairly quiet, albeit nervous during games, was sitting among Spartan fans during the at-bat. Waiting anxiously, he saw his daughter make contact and he said he knew right away.

“It was the first time in a long time that I let out a yell,” Keith said.

Sterling too said she knew it was going to be big.

“I just swung and as soon as I hit it, I knew it was out,” Sterling said. “The excitement just came over my body, I was like, ‘Oh my God!’”

Her two-run home run gave the Cardinals a 3-1 lead. It was a run more than she needed, as she closed out the Spartans with three shutout innings.

“The way she finished that game, it was one of her best games during the postseason,” Fjelstad said.

Two games later, Sterling again came up huge for the Cardinals, this time in the sectional finals. She pitched out of a first inning, no outs, bases-loaded jam by striking out a pair and forcing a pop out to first. After that, she was virtually unbeatable, throwing a complete game shutout to clinch a trip to Madison.

Though her time in Madison didn’t ended the way she wanted it to, it won’t be her last time in the state’s capital. Sterling is committed to play softball at Madison Area Technical College next year, where she’ll pitch and spend time in the outfield.

While her game within the lines obviously garnered the attention of the Wolfpack and assistant coach Terry Ruchti, it was the way Sterling carries herself that he finds the most impressive.

“I love the way she competes,” Ruchti said “You’re not going to beat her because she never quits. She keeps fighting.”

Sterling’s leadership, effort and will to win were contagious this season for the Cardinals. They were a squad that wasn’t supposed to be among Chi-Hi’s elite softball classes, and yet she led them to Madison. Her attitude rubbed off on her teammates, according to Kristine.

“In the last couple weeks, we’ve had so many people come up to us to tell us how our daughter has made an impression on their daughter,” she said. “It’s incredible.”

Even for a program as storied as Chippewa Falls softball, replacing Sterling is not going to be an easy task.