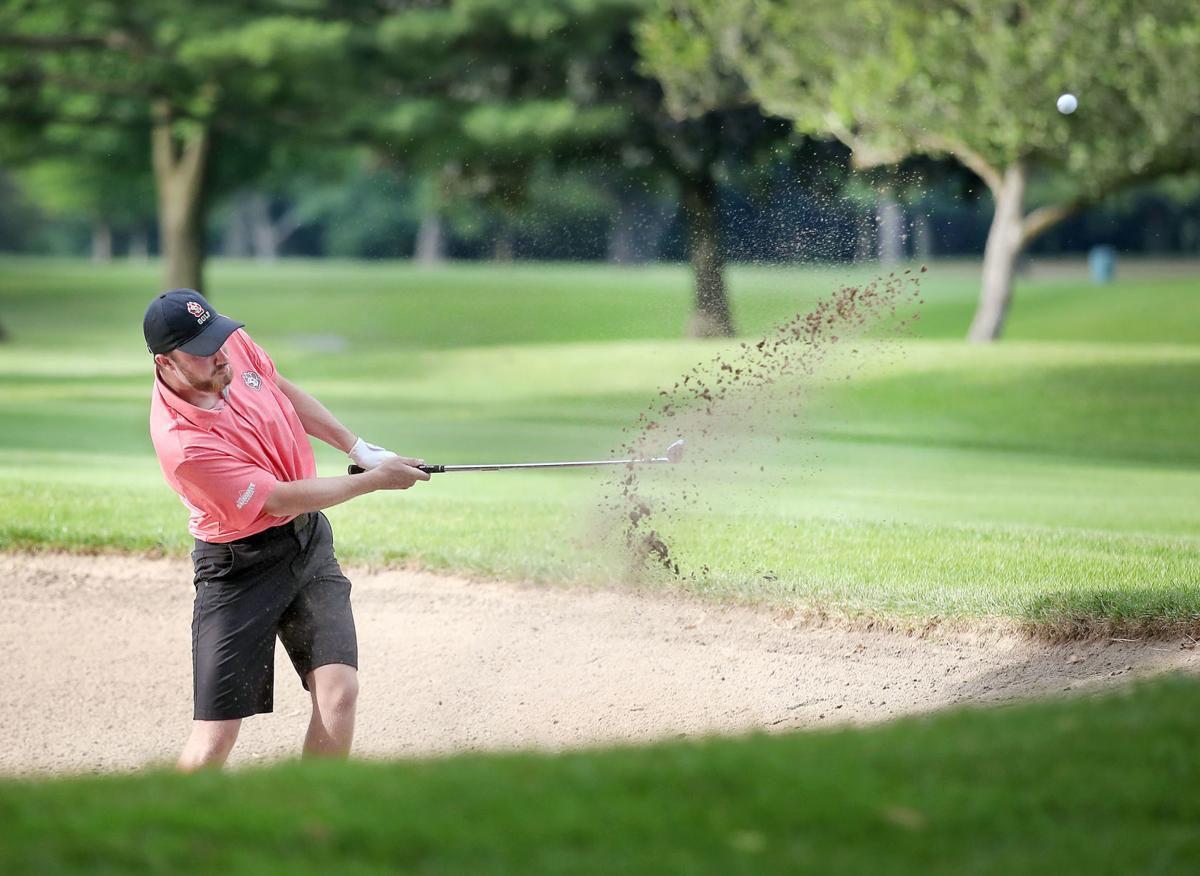 Matt Tolan hits the ball out of a bunker on the 18th hole during the final round of the Ray Fischer Amateur Championship at Riverside Golf Course in Janesville on Sunday. 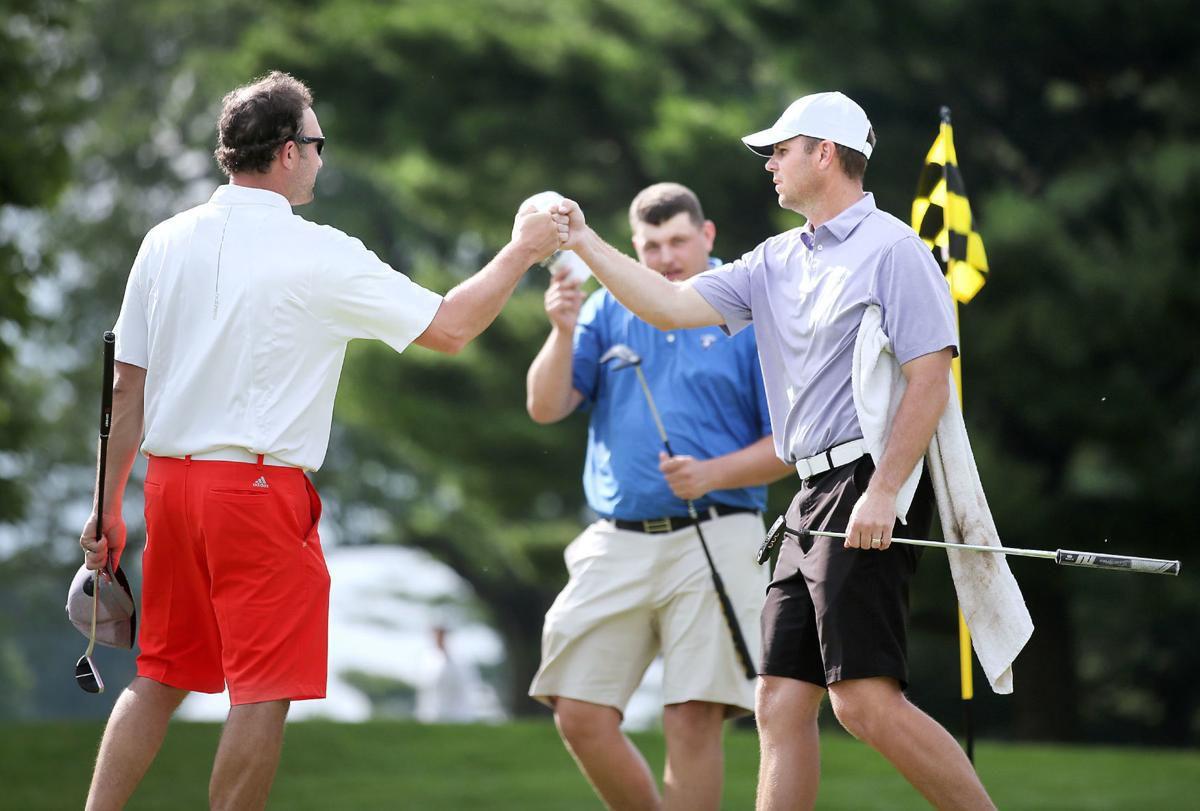 Joe Weber, right, fist bumps Derek Hilmershausen and Jakub Schroeckenthaler, behind, upon finishing the 18th hole on the final round of the Ray Fischer Amateur Championship at Riverside Golf Course in Janesville on Sunday.

Matt Tolan hits the ball out of a bunker on the 18th hole during the final round of the Ray Fischer Amateur Championship at Riverside Golf Course in Janesville on Sunday.

Joe Weber, right, fist bumps Derek Hilmershausen and Jakub Schroeckenthaler, behind, upon finishing the 18th hole on the final round of the Ray Fischer Amateur Championship at Riverside Golf Course in Janesville on Sunday.

JANESVILLE — Joe Weber shot an 8-under 64 Sunday morning at Riverside Golf Course in Janesville and made up exactly zero ground on the leader of the Ray Fischer Amateur Championship.

When his drive sailed out of bounds on the par-5 fourth hole of the fourth and final round later in the afternoon, Weber figured he had no shot at catching Eau Claire’s Matt Tolan, who had led the Fischer after each of the first three rounds.

The dentist from Onalaska was wrong, and he is just fine with that.

A final-round 68 left the 36-year-old Weber at 19-under for the tournament. And when Tolan’s 10-foot par putt on 18 did not drop, Weber had surprisingly come from behind for the biggest victory of his amateur golf career.

“I just kept to myself, and all of the sudden on 17 I looked at the leaderboard and was like, ‘Woah!’” said Weber, who was tied with Tolan at 19 under at that point, though Tolan had a couple more holes left to play. “This means a lot. It’s really hard to win any golf tournament, but especially when you have an accomplished field like this.

“It makes this week taste a lot better after my loss in the match play.”

Weber had fought through one of the toughest amateur fields in the state to reach the Wisconsin State Golf Association’s Match Play Championship on Thursday. He lost in the championship match, 4 and 3, to Deer Park, Illinois, resident Chadd Slutzky.

Weber took solace in the fact that he was playing well — and particularly putting well — and he carried the momentum over to the Fischer in Janesville beginning Friday. He opened with a 3-under 69 on Friday and followed with a 68 on Saturday. A 7-under score was very good, but it still left him four strokes back of Tolan heading into Sunday’s 36-hole finale.

There, with pin placements ripe for scoring in the third round, Weber put together his 64 — a round that included a pair of bogeys. But Tolan matched that round and threatened to lead wire-to-wire.

“I just figured Tolan was going to run away with it,” said Weber, who played collegiately at Marquette, graduating in 2006. “I thought, ‘It doesn’t really matter how many birdies I make, because he’s going to make more.’ Then I shot 8 under and he shot 8 under, so that was kind of true.

“I knew the course would play harder in the afternoon ... so I told myself to ignore the leaderboard. I hit one out of bounds on 4 and just kind of figured that was it. I wound up making bogey, and then I just kept making putts ... and it worked out.”

That was enough as Tolan, an Eau Claire North graduate, slipped to second place for the second consecutive year at the Fischer.

After opening with rounds of 66, 67 and 64, Tolan never found his groove in the final round and suffered from several near misses down the stretch. He just missed medium-length birdie putts on 15 and 16 and was about a centimeter from chipping in for birdie on 17.

When he arrived at 18th tee, Tolan said he had not looked at the leaderboard and did not know he was tied. His drive sailed to the right and left his approach shot to the green blocked by a grove of trees. That shot wound up in a front sand trap, and Tolan blasted out to about 10 feet. His par putt attempt missed narrowly to the right.

“I wouldn’t say the wheels fell off, I just didn’t hit as quality of golf shots as I had in the first three rounds,” Tolan said. “Just didn’t make as many putts, and that’s the way it goes sometimes.

“I didn’t know where the heck I stood out there until I walked off the 18th green and found out I lost by one.

“I fell one short, and obviously, finishing second place last year, too, this is going to sting for a little bit. But I’ll be right back at it tomorrow morning, practicing and getting better. That’s the person I was born and raised to be.”

Tolan tied for second at 18 under with Fond du Lac’s Chris Colla and Lake Forest, Illinois’ John Kryscio, who each shot 67 in the final round to vault up the leaderboard.

McFarland’s Matt Davison posted the best score of the round with a 65 to tie for fifth with Milwaukee’s Nick Nelson — who tied the Riverside course record with a 62 on Sunday morning. Also in that tie for fifth was Stoughton’s Owen Butler — a Milton High graduate who won the event last year — Green Bay’s Jed Baranczyk and Sheboygan Falls’ Tyler Beeck. They were all four shots off the pace of Weber.

Tony Romo, of Burlington and the former Dallas Cowboys quarterback turned NFL color commentator, shot a final-round 75 to finish tied for 41st at 1 under for the week.