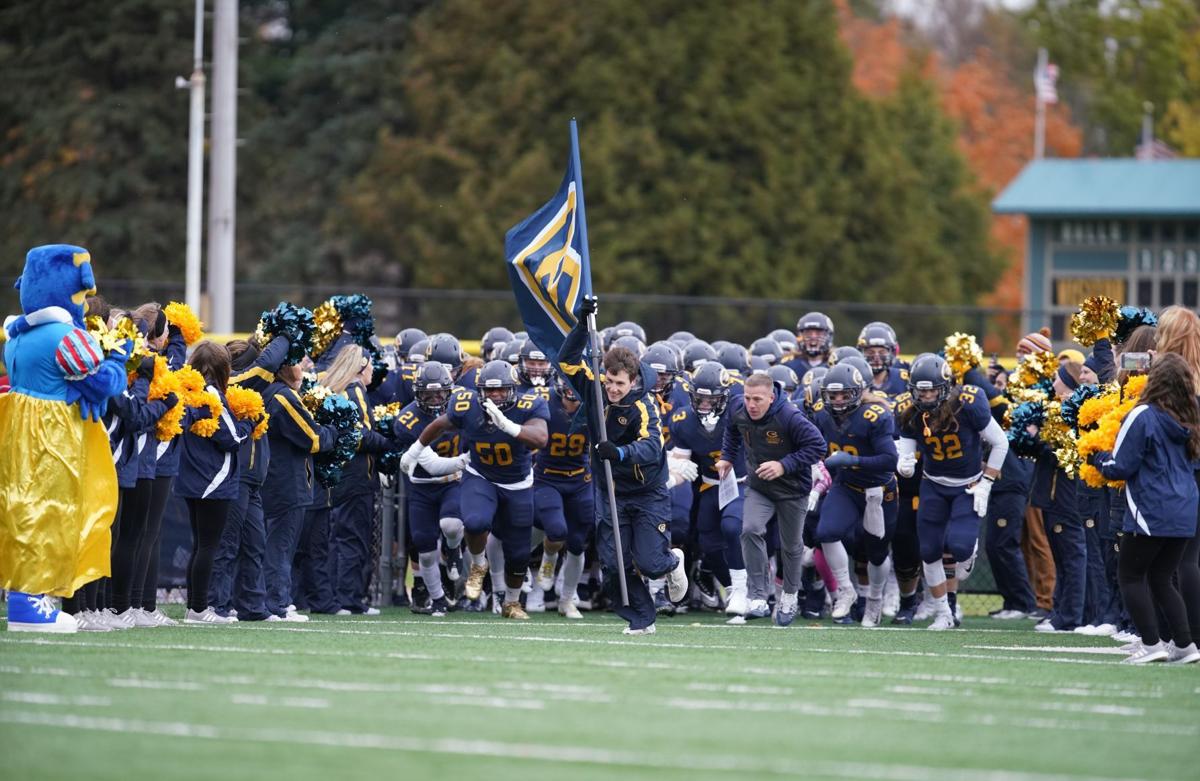 The UW-Eau Claire football team takes the field prior to its homecoming game against UW-River Falls on Oct. 12, 2019 at Carson Park in Eau Claire. 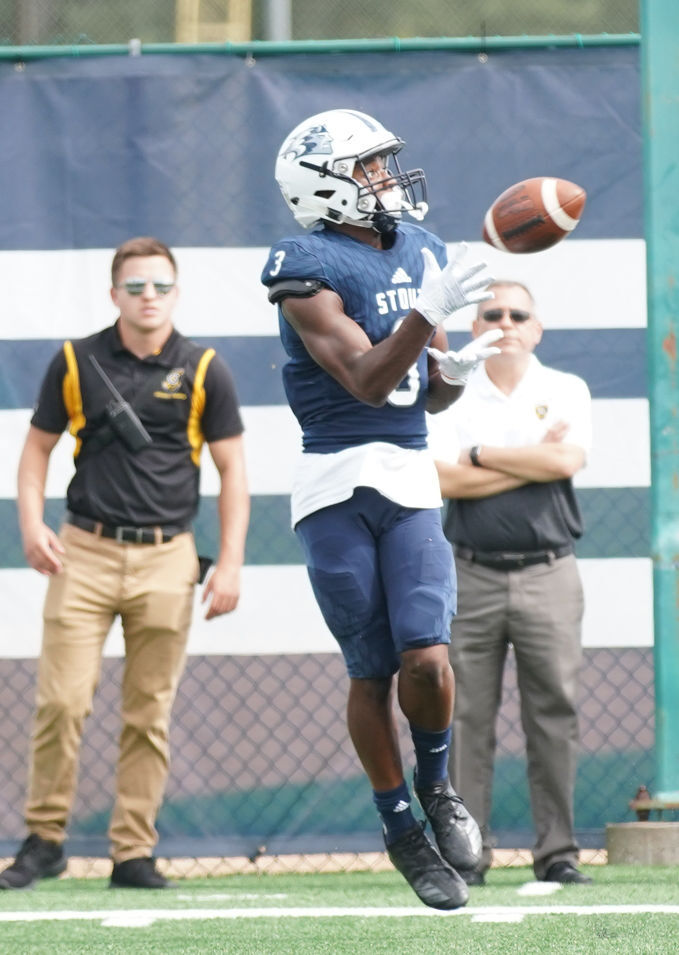 UW-Stout wide receiver Levy Hamer makes a catch during a football game against Gustavus Adolphus on Sept. 14, 2019 in Menomonie.

The UW-Eau Claire football team takes the field prior to its homecoming game against UW-River Falls on Oct. 12, 2019 at Carson Park in Eau Claire.

UW-Stout wide receiver Levy Hamer makes a catch during a football game against Gustavus Adolphus on Sept. 14, 2019 in Menomonie.

The Wisconsin Intercollegiate Athletic Conference announced Monday evening it has canceled its fall conference seasons and championships, wiping out the 2020 slates for UW-Stout and UW-Eau Claire football, women’s soccer, women’s volleyball and men’s and women’s cross country. Women’s tennis and women’s golf, which typically compete in both the fall and spring, will also be suspended during the fall term.

“It’s a sad day for football, for our conference,” Birmingham said in a phone interview. “You knew it could possibly happen, but you always had that hope that we’d play some games. Not all of them, but we’d play five to seven games, that’s what we were hoping for. But it is what it is.”

While the WIAC’s statement did not detail the status of nonconference games, UW-Stout Associate Athletic Director Erin Sullivan said no contests of any kind will be played by WIAC schools during the fall. She did say the door was open for individual institutions to explore scheduling a predetermined, limited amount of contests against outside competition in the spring for football, women’s soccer and women’s volleyball if the state of the coronavirus pandemic improves.

The WIAC would still not keep standings or name a champion in those sports if play resumed in the spring, Sullivan said.

Universities will have the opportunity to establish practice opportunities within the limitations provided by the NCAA throughout the 2020-21 academic year.

Determinations for the winter season will be made at a later date, the conference said in a release. WIAC chancellors had a phone meeting Monday afternoon to finalize the fall plan according to the Wisconsin State Journal.

“This is heartbreaking for our fall student-athletes, coaches, and staff,” Sullivan said in an email. “Our conference exhausted many options, but ensuring safety was always of the utmost importance. We will do our absolute best to provide our student-athletes with meaningful practice opportunities so they can play the sport they love in some facet.”

Birmingham said he got a text message from UW-Stout Athletic Director Duey Naatz at 5:20 p.m. alerting him of an incoming email regarding the status of the fall. The email arrived 10 minutes later and the information needed to be forwarded to players before the news was released to the public at 6 p.m.

“I read his email quick on what the WIAC told us and then I had to fire it out,” Birmingham said. “Ever since then I’ve been setting up Zoom meetings and answering questions and talking to (media).”

Birmingham said he was planning on calling each senior Monday night to hear the players’ initial thoughts. Due to the lack of athletic scholarships at the DIII level, most would need to pay another year’s worth of tuition to continue their athletic career.

The UW-Eau Claire athletic department declined comment on the situation on Monday night. Football coach Wesley Beschorner said he was planning on speaking with his team that evening.

Other WIAC schools did issue individual statements, detailing the difficulty in coming to this decision.

“Today’s announcement from the WIAC and Council of Chancellors has been a very difficult one in our athletic department,” said UW-Oshkosh Director of Athletics Darryl Sims. “In an effort to explore possible opportunities, we, as a conference, agreed that this is the best path forward given the guidelines set forth by the NCAA and the resocialization process. We certainly understand this decision is an unpleasant one, but we hope our student-athletes, coaches, administrators and support staff all appreciate and understand that their health, safety and well-being were the driving force behind this decision.”

“I am proud of the conference and our fellow member institutions for putting together a plan to return to play as soon and as safely as possible,” said UW-Whitewater Interim Athletic Director Ryan Callahan. “While I’m disappointed that our teams won’t be able to compete this fall, I’m confident in the abilities of our head coaches and support staff to create an atmosphere of learning and growth with our teams through other opportunities during the fall semester.”

Fall athletes and coaches now potentially have a full year ahead of them before their next competitive action. So, what do they do?

“Good question,” Birmingham said. “We have a staff meeting with all the sports with our administration at 9 a.m. tomorrow. Right after that, once we hear more of the rules and clarity on the whole thing, we’re going to get together as a football staff. We’ll be working all day tomorrow to try and figure out a plan.”