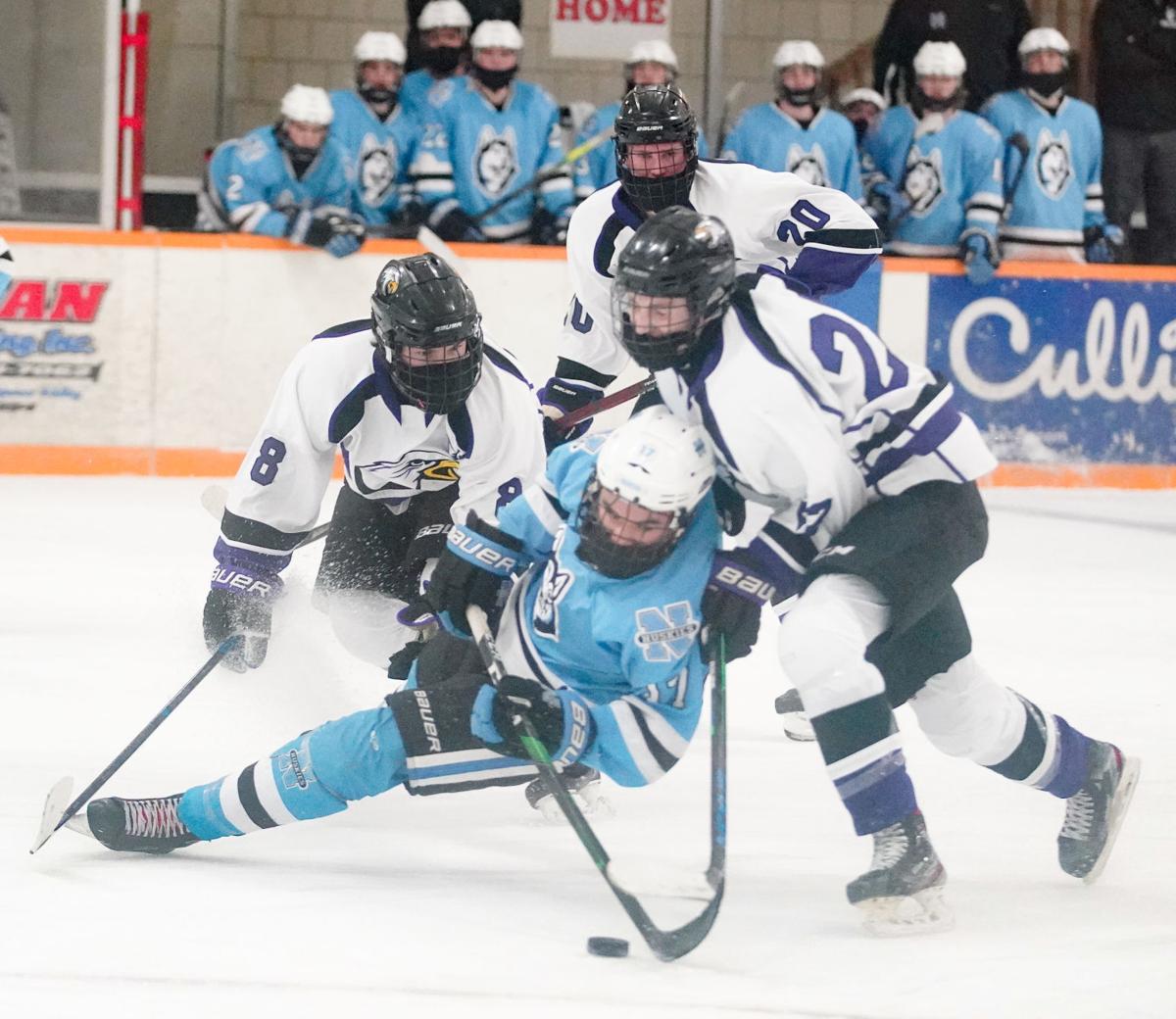 Eau Claire North’s Jack Kein is knocked off his feet by a pair of Eau Claire Memorial defenders during a game on Friday in Altoona. 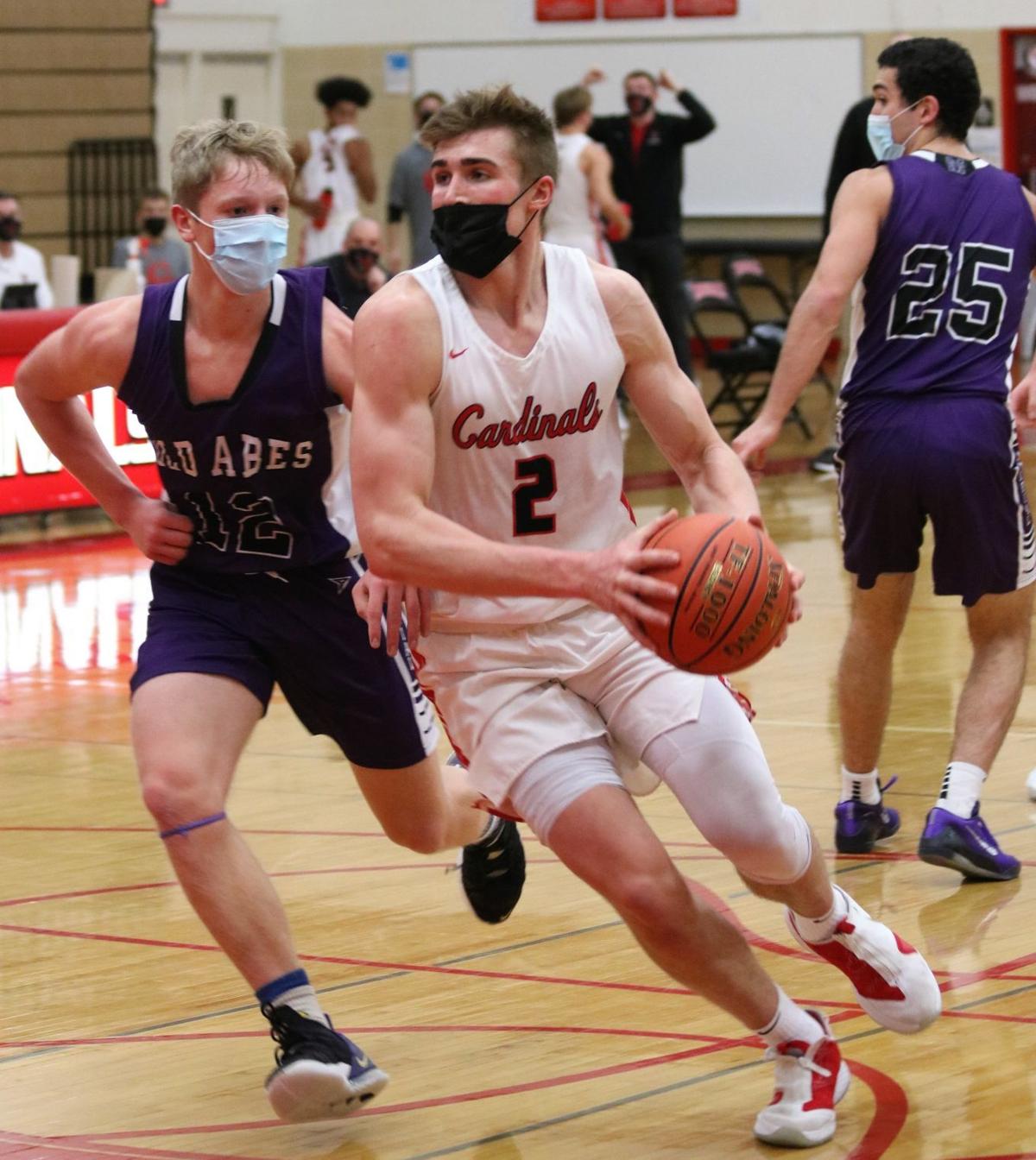 Eau Claire North’s Jack Kein is knocked off his feet by a pair of Eau Claire Memorial defenders during a game on Friday in Altoona.

It’s become common to expect the uncommon this year.

Look no further than the annual city hockey game played between Eau Claire Memorial and Eau Claire North for evidence.

The rivalry clash, usually played at Hobbs Municipal Ice Arena in Eau Claire, was moved to Altoona Hobbs for the matchup on Friday.

The sights and sounds were different, but after their win Friday night, the Huskies likely didn’t care if the game was played in Altoona, Menomonie, Superior or on Mars. For now, they are the kings of Eau Claire.

North went ahead early with a pair of first period goals, then rode a stellar performance in net from sophomore Tristan Bock in a 3-0 victory against the Old Abes Friday at Altoona Hobbs. In addition to the rivalry stakes, it was a major victory for the Huskies in terms of sectional seeding. Memorial is currently ranked No. 5 in the state in the WIPH/Coaches Division 1 Top Six.

“They’re obviously a top program in the state,” North coach Ryan Parker said. “Anytime you can go out and play hard and compete with teams like that, that’s always a big game.”

Caden Sutter, Sam Feck and Jack Kein did the scoring for North, which saw much of its success come from work in the gritty areas and crashing the net.

“Those garbage goals, those help getting in the goalie’s head,” Sutter said. “(You) just kind of grind them out in there.”

Memorial outshot its crosstown rival 30-21 and likely out-chanced the Huskies too, but Bock and the North defense was consistently up to the challenge.

“We didn’t play hard enough in the dirty areas,” Memorial coach Mike Collins said. “We skate nice and fly around, but if you don’t put pucks in the net it doesn’t mean anything.”

This series has been more balanced than in years past since Zac Stange scored in overtime to lift the Huskies to their first intracity victory in 11 years in 2017. North has won twice and tied once in the last five meetings, but had never shut out the Old Abes in this recent era until Friday.

This game was originally scheduled to be played at Hobbs Ice Center on Saturday following an announcement from the Eau Claire Area School District that the facility is once again open for games. However, strict rules were put into place that would have made it difficult to stage a game in a normal fashion. That included limiting how many players could be on the bench at a time, with the remaining reserves having to sit in the hallway behind the benches.

Parker said he found out about the move to Altoona at 9:40 p.m. on Thursday.

“In order to play a game like this, there are so many moving parts,” Parker said. “We need to have a bench. There are so many things going on. Guys get hurt, they get injured, they’re coming off, there’s penalties. There’s so many nuances that go into the game.”

After coughing up an 11-point lead in the final four and a half minutes of the second half, it might have been easy for Chippewa Falls to just give in.

Seeing a 72-61 lead over Eau Claire Memorial evaporate as time was running out didn’t sink the Cardinals boys though. When a play needed to be made, they made it.

Jake Spaeth hit an overtime-forcing free throw with 2.6 seconds left, and the Cardinals pulled away at the charity stripe in the extra period for a 90-81 win over the Old Abes on Friday.

“We’re a pretty even-keeled team,” Chippewa Falls coach Jason Proue said. “We don’t get too high, we don’t get too low. There were some lows, (Memorial) had a big stretch and our guys responded to it.”

Chippewa Falls outscored Memorial 13-4 in overtime, with Joe Reuter accounting for 10 of those points. The 6-foot-5 senior finished with a game-high 41 points, tied for the fifth-most points in a single game in Chi-Hi history.

Reuter hit a 3-pointer to start off overtime, and made key free throws down the stretch to ice the victory. That included a pair of shots from the line after a technical foul was assessed to the Old Abes bench. Reuter’s two makes stretched the lead to 86-81, and Memorial couldn’t recover.

“Joe Reuter’s one of the best players in the state, and he hit big shots for them in overtime like you would expect a senior leader to do,” Memorial coach Chad Brieske said. “I thought our kids battled and made them contested looks, but at the same time, he’s a good player. We tip our hat to Chippewa in terms of their ability to knock shots down.”

But Spaeth, who finished with 20 points, got to the basket with just under three seconds left and was fouled as his shot rolled off the rim. He hit the second free throw for the Cardinals, tying the game at 77.

“You just can’t think about it, especially when the gym’s so loud. You’ve just got to kind of drown out all the noise,” Spaeth said of the tying free throw. “Once we got ready for overtime, we just had to regroup, come together and be tough.”

Rudiger scored the game-winning goal off an assist from Joey Schemenauer in overtime, giving the Sabers a 2-1 victory over Bay Area.

The Sabers forced overtime with Emme Bergh’s power-play goal in the third period.

The Menomonie boys basketball team gave state-ranked River Falls all it could handle. Unfortunately for the Mustangs, in a game full of big shots, the Wildcats made the last one.

River Falls’ Zac Johnson made the game-winning jumper with under two seconds left, giving the Wildcats — ranked fourth in Division 2 — a 53-51 overtime win on Friday.