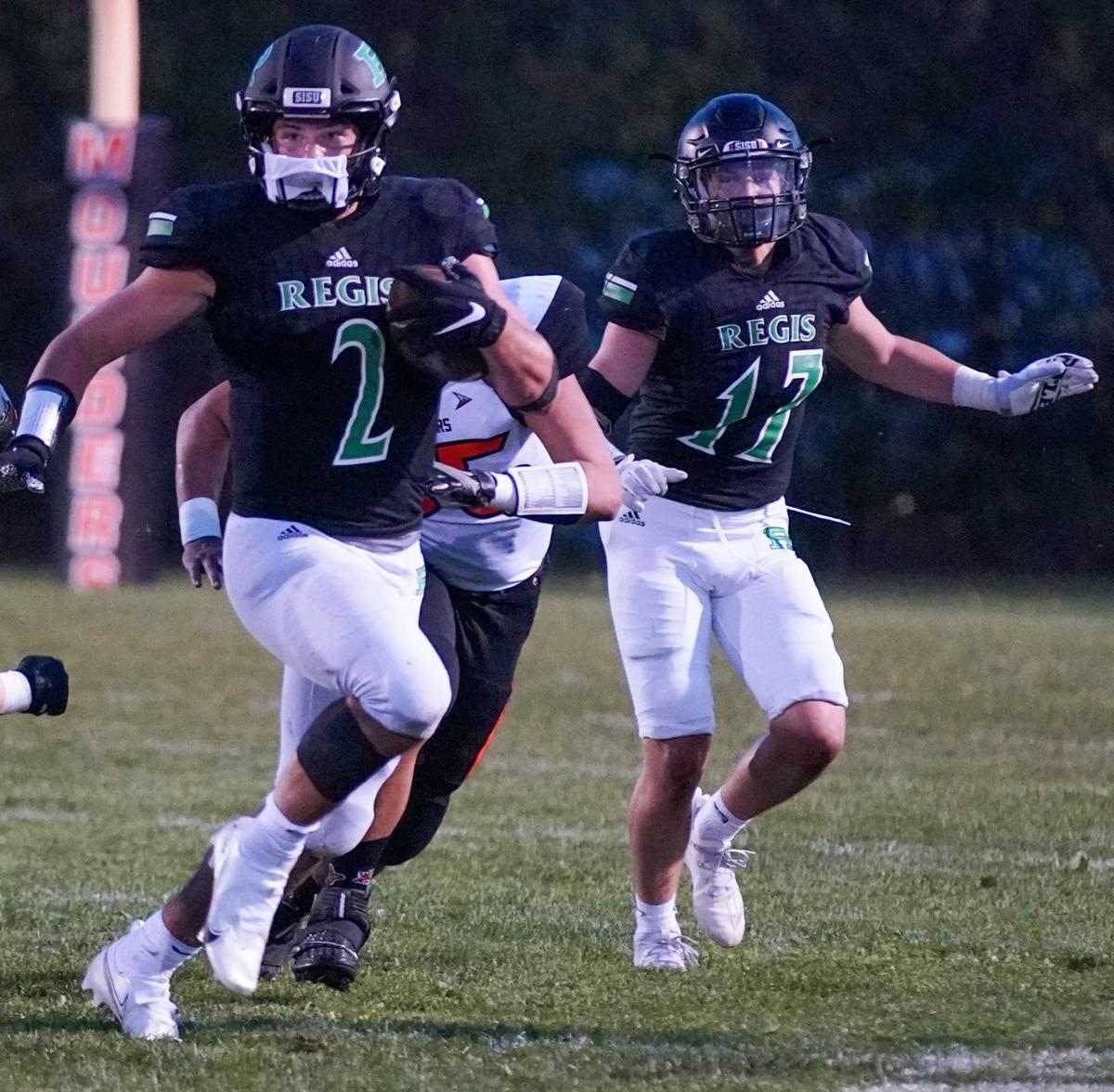 Regis’ Zander Rockow (2) and Drew Goettl (17) turn upfield during a football game against Elk Mound on Friday in Elk Mound. 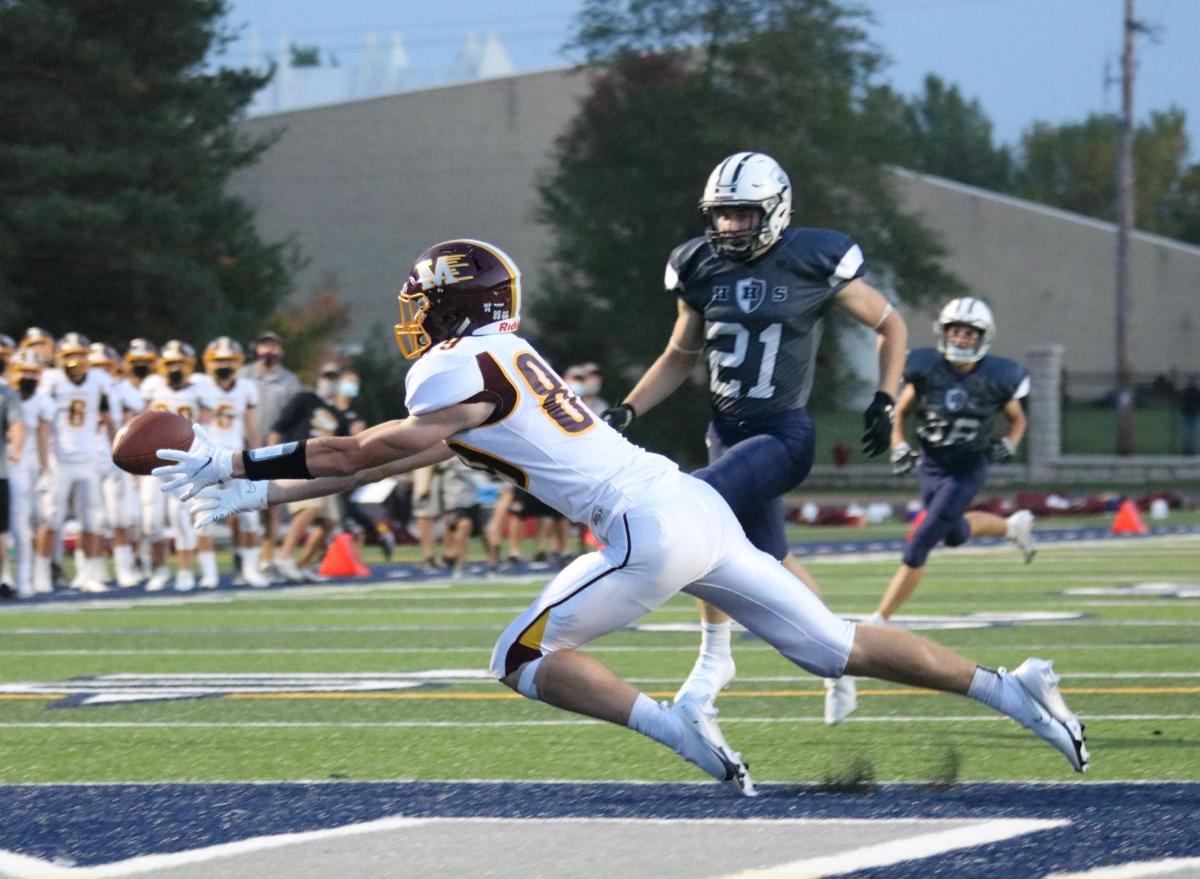 Menomonie's Noah Fedderson reaches out to try and make a catch in the end zone against Hudson on Friday in Hudson.

Regis’ Zander Rockow (2) and Drew Goettl (17) turn upfield during a football game against Elk Mound on Friday in Elk Mound.

Menomonie's Noah Fedderson reaches out to try and make a catch in the end zone against Hudson on Friday in Hudson.

After months of uncertainty about its status, prep football is officially back.

And what a debut it was.

Teams around the state kicked off the season on Friday night, and the Chippewa Valley was home to plenty of exciting action in Week 1.

Perhaps the most eye-catching performances of the first Friday of the season came from the revamped Cloverbelt Conference. The league’s heavyweights didn’t waste any time flexing their muscles.

In Elk Mound, the Regis defense came up with several goal-line stands and three interceptions to score a 28-6 win over the Mounders. It was a strong start for the unit which was a driving force behind the team’s run to the Division 6 state championship game last fall.

“Defensively, we came up with some huge goal-line stands,” Regis coach Bryant Brenner said after the game. “I thought that was the difference. ... They had the ball within the 10-yard line two, three times, and we came up with big stops. That was a big key.”

And the Ramblers were opportunistic on offense, breaking off a few big runs to spoil an otherwise solid night for the Elk Mound defense. Three of the Ramblers’ four touchdowns were from 26, 81 and 61 yards out.

“It gives us something to work on and get better on,” Mounders coach Dave Lew said of the couple of big plays that led to points. “A player after the game said ‘We’re just going to get better.’ And that’s what we’re going to do.”

While it was the defense that shined for Regis, fellow Cloverbelt contender Mondovi made an impact on offense.

Running back Tanner Marsh was perhaps the star of the weekend after rushing for 321 yards and five touchdowns in the Buffaloes’ 48-20 win over Osseo-Fairchild.

Mondovi quarterback Cade Brenner had a big game too, throwing for 138 yards and a touchdown while also scampering for 85 yards.

Up next? A pivotal bout between Regis and Mondovi this Friday on the Buffaloes’ home turf.

Some other highlights from the Week 1 slate:

Mustangs give their all

Menomonie was already dealing with setbacks before they even walked off the bus for the Mustangs’ season opener Friday night.

None of its players have tested positive for COVID-19, but head coach Joe LaBuda still left Menomonie for Hudson without a third of his roster due to contact tracing protocols — meaning student-athletes came in close contact with someone who tested positive.

Among those missing from the Menomonie sideline was linebacker Will Ockler, an All-Big Rivers selection last season, as well as a handful of other starters. Many had to learn new positions in practice this week. Some didn’t even get that luxury. It’s the nightmare many coaches lose sleep over as Wisconsin football plays on during the pandemic.

“They faced a ton of adversity,” LaBuda said. “I’m proud of the kids we had here that battled. We had some kids get injured. We ended up throwing kids in at the end that had never even practiced at different positions because we came over here with 43 of our 63 guys.”

Those who were in attendance hung in to the end with Hudson, holding the lead three times but falling short in a 30-23 loss to their Big Rivers rivals.

A 68-yard pass from Owen Anderson to Troy Bounting with 3:30 left in the game proved to be the difference, with the Raiders’ senior signal-caller hitting his running back with a perfect toss as Bounting streaked across the right side of the field.

Menomonie had one final possession to answer and got as far as the Hudson 35-yard line thanks largely to a defensive pass interference call on a double-pass attempt. But Evan Tyler sacked Menomonie quarterback Ryan Kahl to force a fourth and 12 chance, and the Mustangs were unable to extend the contest with a conversion.

“To play all the guys we played both ways was too much for us to overcome,” LaBuda said. “And we made too many mistakes. We had a chance to win it, but I’m proud of how hard our kids played.”

Rice Lake was feeling good after Tristan Scheurer hauled in a touchdown pass from Cole McDermott with a minute left in its game against New Richmond. The score pulled the Warriors to within one point of the Tigers’ lead, and Rice Lake opted to go for the win instead of the tie.

But New Richmond stopped the Warriors’ run attempt on the two-point conversion, and recovered the ensuing onside kick to preserve a 28-27 win.

Bloomer could have folded after giving up the tying touchdown in the final three minutes of its game against St. Croix Falls.

But the Blackhawks didn’t.

After Bloomer’s Ethan Rothbauer plunged into the end zone from a yard out — his fourth score of the game — to give the Blackhawks a six-point lead with 3:35 left, Bloomer appeared to be in good shape. But Dayo Oye broke off a 28-yard touchdown run just over a minute later to tie things up.

McDonell trailed Alma Center Lincoln 20-8 after the first quarter of their eight-man matchup.

The Macks, led by Tanner Opsal, rattled off 38 unanswered points to claim an emphatic 46-20 victory. Opsal ran for three touchdowns and threw for two more. The senior accounted for 367 yards of total offense.

Stanley-Boyd’s Mikey Karlen had a night to remember in the kicking game, nailing three field goals for the Orioles — all from more than 30 yards away. He also made six extra points in a 65-6 win over Fall Creek.

Karlen also ran for two touchdowns as Stanley-Boyd set a program record for points scored in a single game.

Durand’s Simon Bauer didn’t need to get a lot to do a lot. The running back carried the ball just 15 times, but ran for 183 yards and three touchdowns in the Panthers’ 35-20 win over Neillsville/Granton.

Cumberland receiver Jack Martens earned all-state honors last fall. He picked up right where he left off on Friday. The wideout turned seven catches into 141 yards and three touchdowns in the Beavers’ 54-6 win over Cameron.

“I know people throw around the word surreal, but it just kind of was. It was just strange. ... I told the guys after the game, ‘Even though there wasn’t a huge crowd tonight, there was something magical.’ It was cause of what they did on the sideline. They were into the game. I think the guys really had a lot of fun tonight.” — Hudson coach Adam Kowles.