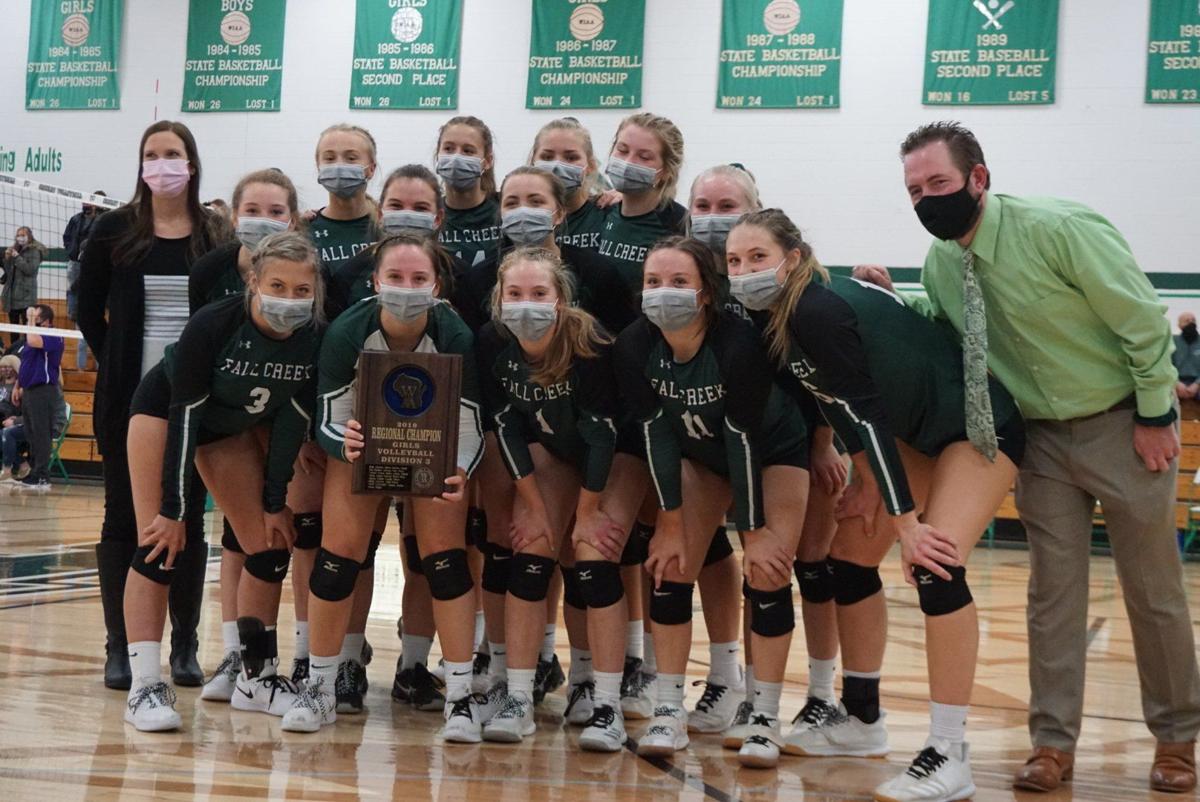 The Fall Creek volleyball team celebrates winning a third consecutive regional title with a 3-0 sweep of Ladysmith on Saturday in Fall Creek. The Crickets posed with their 2019 plaque because the 2020 trophy was not present. 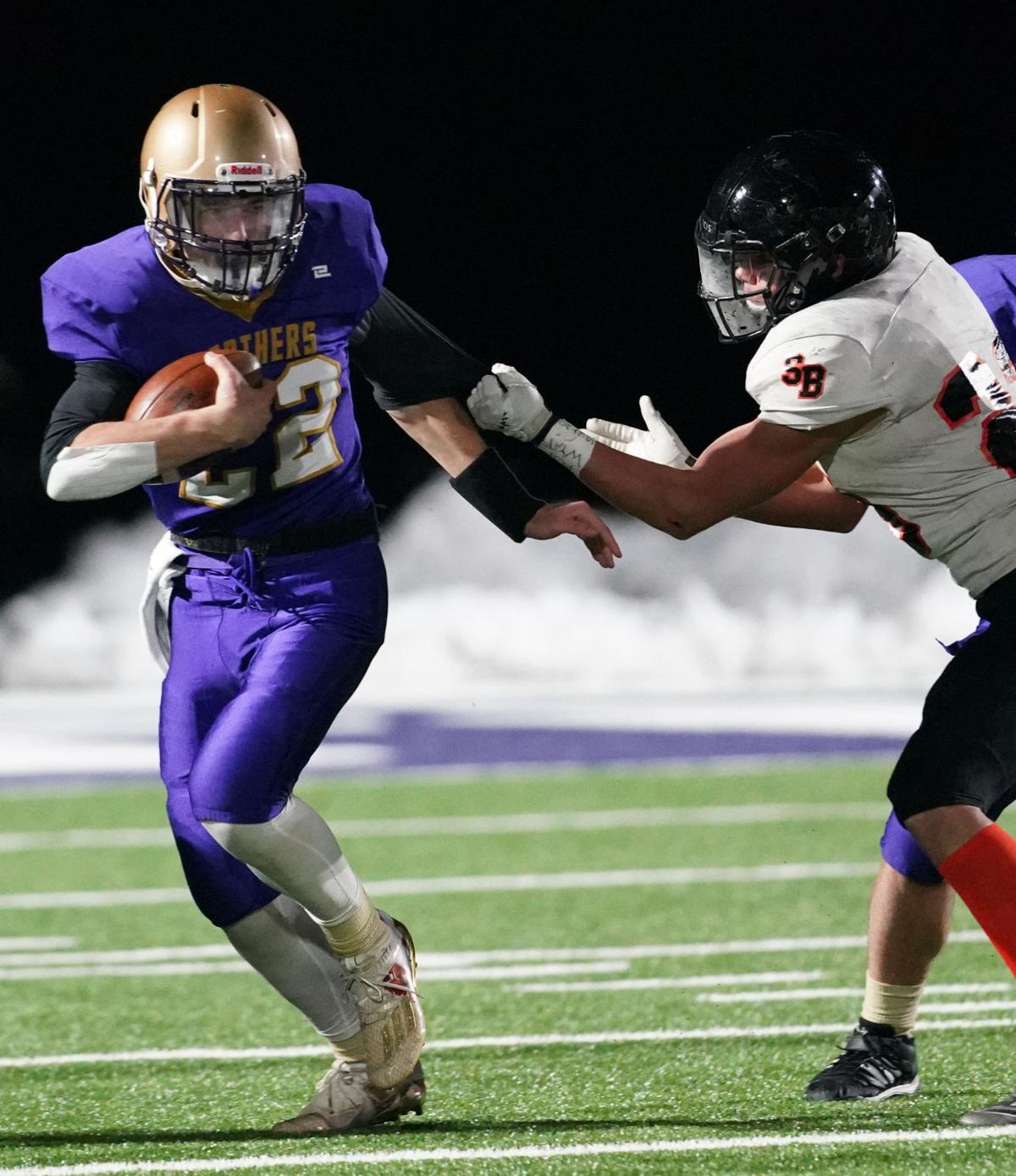 Durand's Joey Biesterveld runs against the Stanley-Boyd defense on Friday in Durand.

The Fall Creek volleyball team celebrates winning a third consecutive regional title with a 3-0 sweep of Ladysmith on Saturday in Fall Creek. The Crickets posed with their 2019 plaque because the 2020 trophy was not present.

Durand's Joey Biesterveld runs against the Stanley-Boyd defense on Friday in Durand.

Rightfully so. The Crickets clinched a third consecutive regional championship over the weekend, and are a couple of wins away from a second straight trip to state.

And on their playoff journey so far, their competition hasn’t come particularly close to slowing them down. The latest showing, a 25-17, 25-13, 25-13 win over Ladysmith on Saturday, came in emphatic fashion.

Gianna Vollrath smacked 17 kills on offense for the Crickets, and chipped in defensively with 12 digs. Emma Ryan added 10 kills, and Sam Olson made 26 assists while serving four aces. Emily Madden had 10 digs for the defense.

“I am really proud of how this group of girls has come together since we started in September,” Crickets coach Matt Prissel said in a message to the Leader-Telegram. “We missed the opportunity to play in the summer season and the normal fall tournaments and quads and we needed some time to mesh together and get used to playing next to each other. However, now we are playing some of our best volleyball of the season when it matters the most. The girls are doing a fantastic job and they are stepping up each match.”

The Crickets improved to 14-2 on the season. They are seeking a second consecutive trip to the state tournament after reaching the Division 3 semifinals last fall.

“The girls are really excited to be back in the sectional round of the playoffs,” Prissel said. “Watching them lift the regional championship plaque and scream, holler and celebrate was special on Saturday night. To get to witness that sheer joy and see them enjoy their accomplishment is one of the best feelings I can have as a coach.”

The playoff field was re-seeded for all four Divisions on Sunday. Fall Creek is the top seed in its sectional and hosts Clear Lake on Thursday.

Fall Creek isn’t the only local team moving on to sectionals. There’s McDonell, who swept Cornell to win a fourth Division 4 regional title in the last five years. There’s Immanuel Lutheran, who stayed unbeaten with a 3-0 over Independence in Division 4.

And there’s Bloomer, who played one of the more exciting matches of the night on Saturday. The Blackhawks rallied from a 2-1 deficit for a second straight match to defeat St. Croix Central 3-2 in Division 2. Mondovi did the same thing in Division 3, winning the final two sets to rally past Whitehall 3-2.

And Osseo-Fairchild pulled off an upset to advance to sectionals, toppling top-seeded Pacelli 3-1 on the road in Division 3.

The sectional semifinals are this Thursday.

Here’s a look at some of the other prep sports action from the weekend:

It was a good weekend for the Menomonie cross country program.

The Mustang boys and girls both won sectional championships on Saturday to clinch berths to the Division 1 state tournament.

Patrick Schwartz and Isabella Jacobsen finished as runners-up in their respective races to lead the Mustangs. The Menomonie boys had all seven runners finish in the top 20, with Jude Ogden (12th) and Connor Norby (14th) both securing top 15 finishes. The girls had two top 10 performers in Jacobsen and Madeline Palmer (fifth).

Durand cross country runners seemed to enjoy running for a sectional title right at home. At least the results suggest so.

The hosts won the girls team sectional title in Division 3 to advance to state, and Parker Schneider won the boys race to move on to the state meet himself.

Colfax’s Molly Heidorn was the individual sectional champion in the girls race after crossing the finish line first.

The McDonell boys enjoyed their day too. They won the boys team championship to head to state.

The Chetek-Weyerhaeuser girls cross country team had a day to remember on Saturday.

Lana Blumer won the girls sectional race and teammate Natalie Poppe took third to help the Bulldogs take the team sectional championship at Cameron. They’ll be moving on to the Division 3 state meet.

Simon Bauer ran for an eight-yard touchdown to open overtime, then Ethan Anibas threw Stanley-Boyd’s Luke Smith back on a fourth down attempt to seal a 28-21 Panther victory Friday in Durand. The win was the team’s second straight overtime triumph, having previously edged rival Mondovi in an extra frame last week, and keeps the Panthers undefeated in their first season in the Cloverbelt.

“We were a little shorthanded. We lost a couple guys to quarantine this week,” Durand coach Rod Rosemeyer said after the win. “I couldn’t be more pleased with the guys that stepped up and made a contribution. We had a tough week of practice with all the snow. We didn’t get a lot done, but I was pleased with the effort. They played real hard tonight.”

The eventual game-winning score from Bauer capped off a quick two-play drive to open overtime. Quarterback Joey Biesterveld hit Caden Berger for a 17-yard pass to set up a first-and-goal opportunity, and Bauer found space in the middle of the defense to push his total on the night to 165 yards and two touchdowns.

“Our offense was just clicking at the end of the fourth quarter,” Biesterveld said. “Then we just kept that momentum going into overtime.”

The Durand defense made quick work of overtime as well, taking just four plays to force Stanley-Boyd into a turnover on downs. The Orioles looked poised to get the needed yardage on a fourth-and-4 play when Carsen Hause found Smith with a pass near the left sideline, but Anibas was able to stop his momentum just short of the sticks and pull him back out of bounds.

The senior accounted for nine touchdowns — bringing his season total to 30 — in the Macks’ 68-28 win over Bruce. He ran for 178 yards and seven scores and added 242 yards and two touchdowns through the air.

Eleva-Strum’s Nick Higley was instrumental in the Cardinals’ 34-26 win over Augusta on Friday, accounting for five touchdowns in a standout showing.

Higley ran for three scores on the ground and threw for two more to help Eleva-Strum pull away from its Dairyland Conference foe. He scored all three rushing touchdowns in the first half, and finished with 239 yards of total offense.

It doesn’t take much time or many plays for a football game to quickly change.

Rice Lake was poised to even the score against Menomonie late in the second quarter of a Big Rivers Conference contest on Friday. Instead the Mustangs forced a stop at their own 2-yard line before marching 98 yards for a score with time running out in the half as Menomonie went on to win 28-13.

“That touchdown there has a big psychological effect, as well as the scoreboard,” Rice Lake coach Dan Hill said. “That was a huge play and we were caught sleeping on a long touchdown so a couple of plays can make a huge difference and we just couldn’t execute to come back.”

Rice Lake quarterback Cole Fenske had found his favorite target Alex Belongia for 39 yards down to the Menomonie 3. A two-yard carry by Andrew Farm put the Warriors (0-5) a yard from narrowing the margin but Jayden Perkins had carries of zero and negative-one yards to set up a fourth down. Fenske rolled to his right looking for receiver Tristan Scheuer but the pass fell to the ground, giving the ball to Menomonie with 3:46 to halftime.

The Mustangs worked their way down the field on nine plays for 98 yards as Will Ockler punched in a 1-yard run with 20 seconds left before the break to go up 21-7. Menomonie had gotten a 25-yard pass completion from quarterback Ryan Kahl to Noah Feddersen and a 37-yard carry from DeVauntaye Parker on the drive. Parker ran for 134 yards in the first half on his way to a game-high 164 yards rushing.

“I give our kids a lot of credit. They faced a lot of adversity this week,” Menomonie coach Joe LaBuda said. “They’re a good football team and that was the turning point of the game. If they put it in and we go into half 14-14, it’s a whole different ball game. Not only to get the stop but in two minutes to drive it 98 yards, that was huge.”