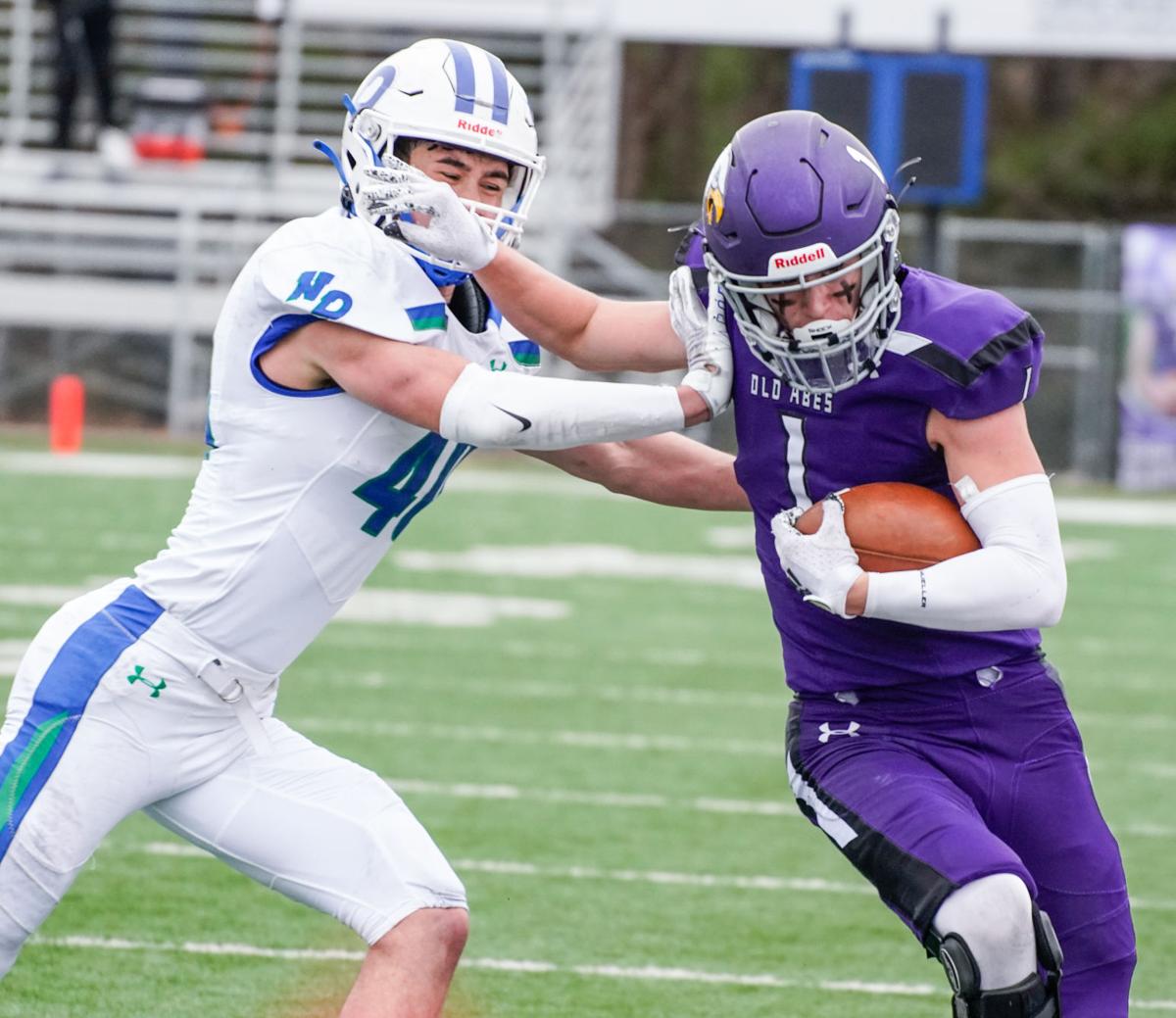 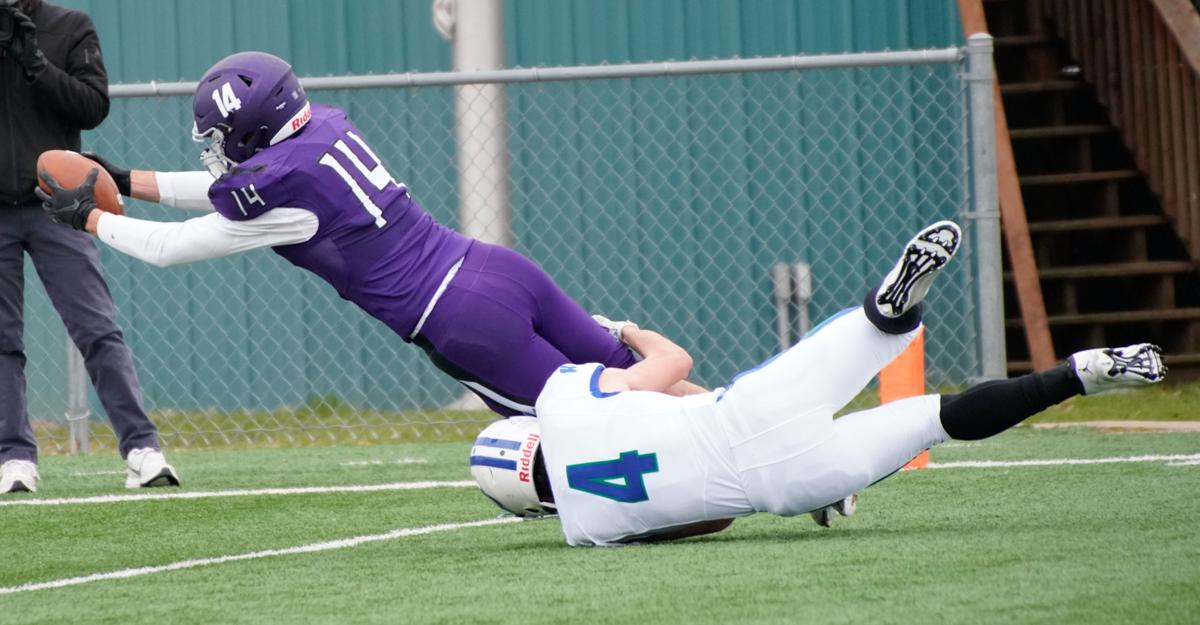 Eau Claire Memorial’s Marco Ebeling dives for the end zone while Notre Dame’s John Nolle tries to tackle him during a football game on Saturday at Carson Park. 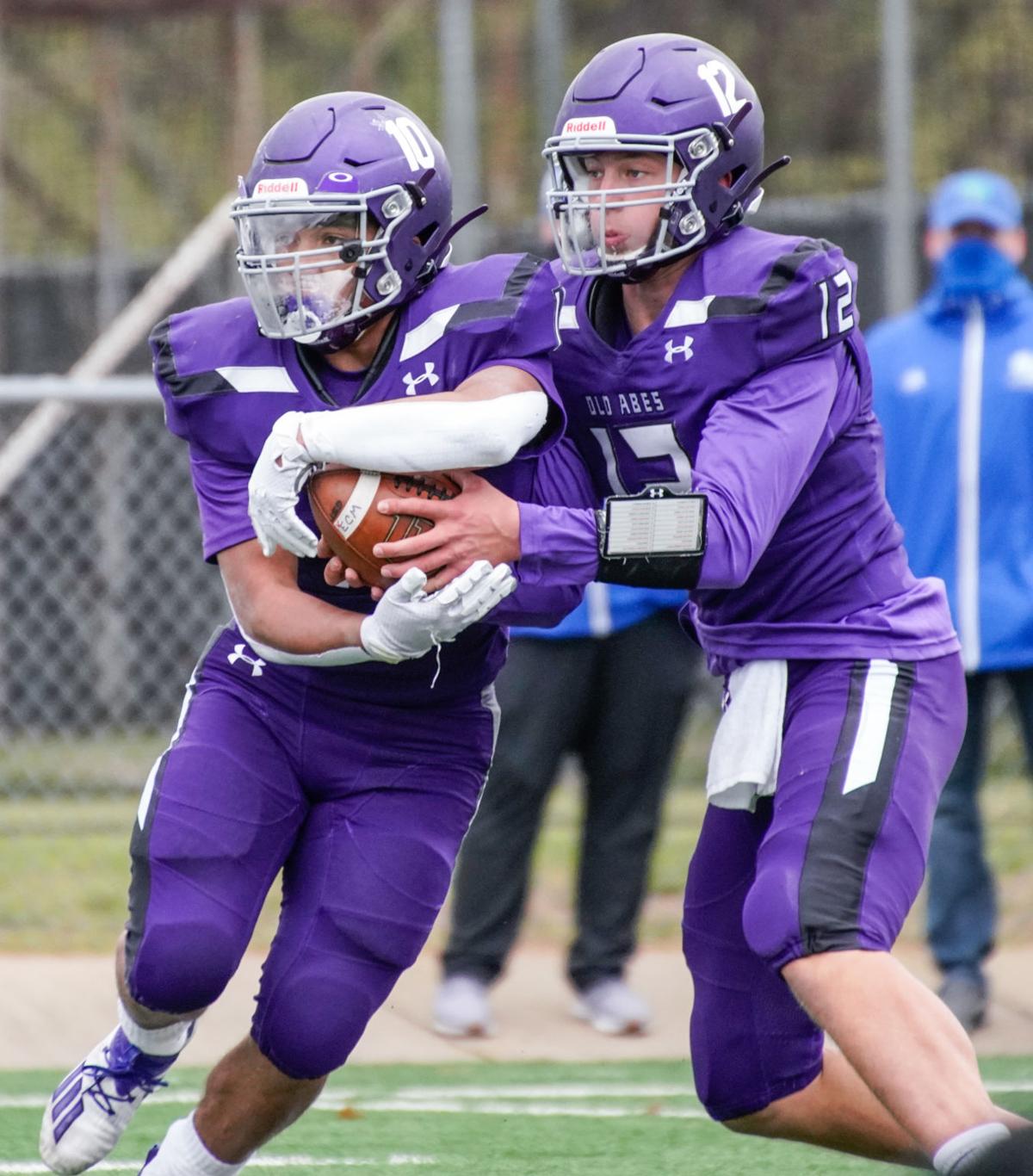 Eau Claire Memorial quarterback Brice Wingad (right) hands the ball off to running back Reese Woerner during a football game against Notre Dame on Saturday at Carson Park.

Eau Claire Memorial’s Marco Ebeling dives for the end zone while Notre Dame’s John Nolle tries to tackle him during a football game on Saturday at Carson Park.

Eau Claire Memorial quarterback Brice Wingad (right) hands the ball off to running back Reese Woerner during a football game against Notre Dame on Saturday at Carson Park.

In a game full of momentum swings, the visitors got the final one. And that was the margin that made the difference.

Minutes after seeing an attempt from 50-plus yards narrowly miss as time expired in the fourth quarter, Aiden Wolfram made a 37-yard field goal in overtime to give Notre Dame a 24-21 win over Eau Claire Memorial on Saturday at Carson Park.

The two squads battled back and forth, and the Old Abes pushed the state’s top-ranked medium-sized school in the WisSports.net rankings to its limit. But the long field goal kept the Tritons unbeaten and Memorial on the losing end of a thriller.

“This was an incredible high school football game,” Memorial coach Mike Sinz said. “It was one of the best games I have seen. I am extremely proud of our players for the heart and effort that they played with. They took the No. 1 team in the state into overtime and it shows what type of character and fight they have.”

Notre Dame (5-0) held a 10-0 lead by the second quarter, but Marco Ebeling hauled in a 29-yard touchdown pass from Tyson Allen just before halftime to pull Memorial within three.

The Tritons added a field goal in the third quarter, but Brice Wingad gave Memorial the lead with a three-yard touchdown run at the end of the period.

Notre Dame went back on top with a touchdown in the fourth quarter, but Wingad connected with Jack Redwine on a 39-yard touchdown pass with four minutes remaining to force a tie at 21-21.

Notre Dame got Wolfram a chance at a 54-yard field goal in the final seconds of regulation, but the kick sailed just wide.

The Tritons recovered a fumble in overtime and drove down the field, setting up Wolfram’s 37-yard kick for the win.

Grant Gerber was all over the field for the Old Abes. He made three catches for 31 yards on offense, and caused major problems on the defensive line.

“Grant Gerber played one of the best games on the defensive side of the ball that I have ever seen in my 16 years of coaching high school football,” Sinz said. “He was all over the field making plays and was basically unblockable from his defensive line position.”

Huskies fall on the road

The Vikings pulled away in the second quarter. Holmen led 7-0 after the first quarter, but added two more scores in the second to take a 21-point lead into halftime.

Fourteen more points in the third quarter all but sealed the win for the Vikings.

New Minnesota Vikings signing Patrick Peterson was able to pry the No. 7 jersey from quarterback Nate Stanley, but it came at a price.

The Vikings announced the deal between the two on Sunday. Stanley was on the team’s practice squad last season after going to the team in the seventh round of the draft.

Stanley will wear No. 14 next year.

Eau Claire Memorial’s Molly Hower finished in the top eight at the girls tennis individual state tournament over the weekend.

After winning her first two matches of the tournament, Hower fell in the quarterfinals. But by virtue of reaching the quarterfinals, she had a chance to compete for fifth place. She fell in three sets to De Pere’s Sophia Fergus in the playoff match.

Rassbach won the girls race by about 40 seconds at the Husky Invitational. She was the only girl to finish in under 19 minutes.

On the boys side, Memorial’s Scout Stokes was the top local finisher by taking 11th. The Old Abes took second in the team standings, which were topped by Stevens Point.

The UW-Eau Claire softball team brought some serious pop to the plate in its doubleheader split with UW-Stevens Point on Saturday.

Sadie Erickson and Maria Back both hit two home runs in a 16-11 Game 2 victory. Abbey Place got in on the fun too, hitting a homer of her own in the win.

In a Game 1 11-3 defeat, Eau Claire’s Megan Maruna launched one over the fences.

UW-Stout athletes shined in one of the nation’s premier track and field events over the weekend.

Pole vaulter Noah Zastrow led the way at the Drake Relays, winning the College Division in his event. He cleared a height of 17 feet, 0.75 inches to win.

Kevin Ruechel placed third in shot put and fourth in the discus. Jacob Bugella took seventh in the hammer throw.