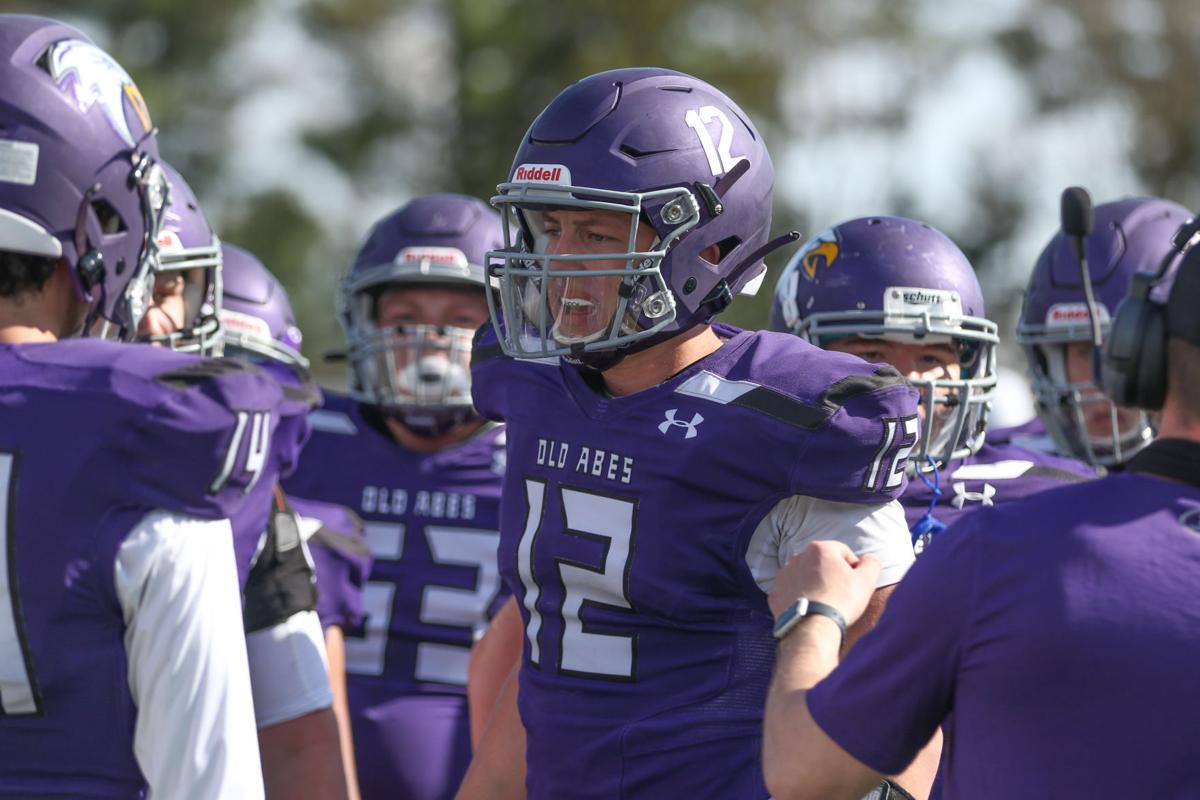 Eau Claire Memorial players gather around quarterback Brice Wingad (12) during a game against DeForest on Saturday at Carson Park. 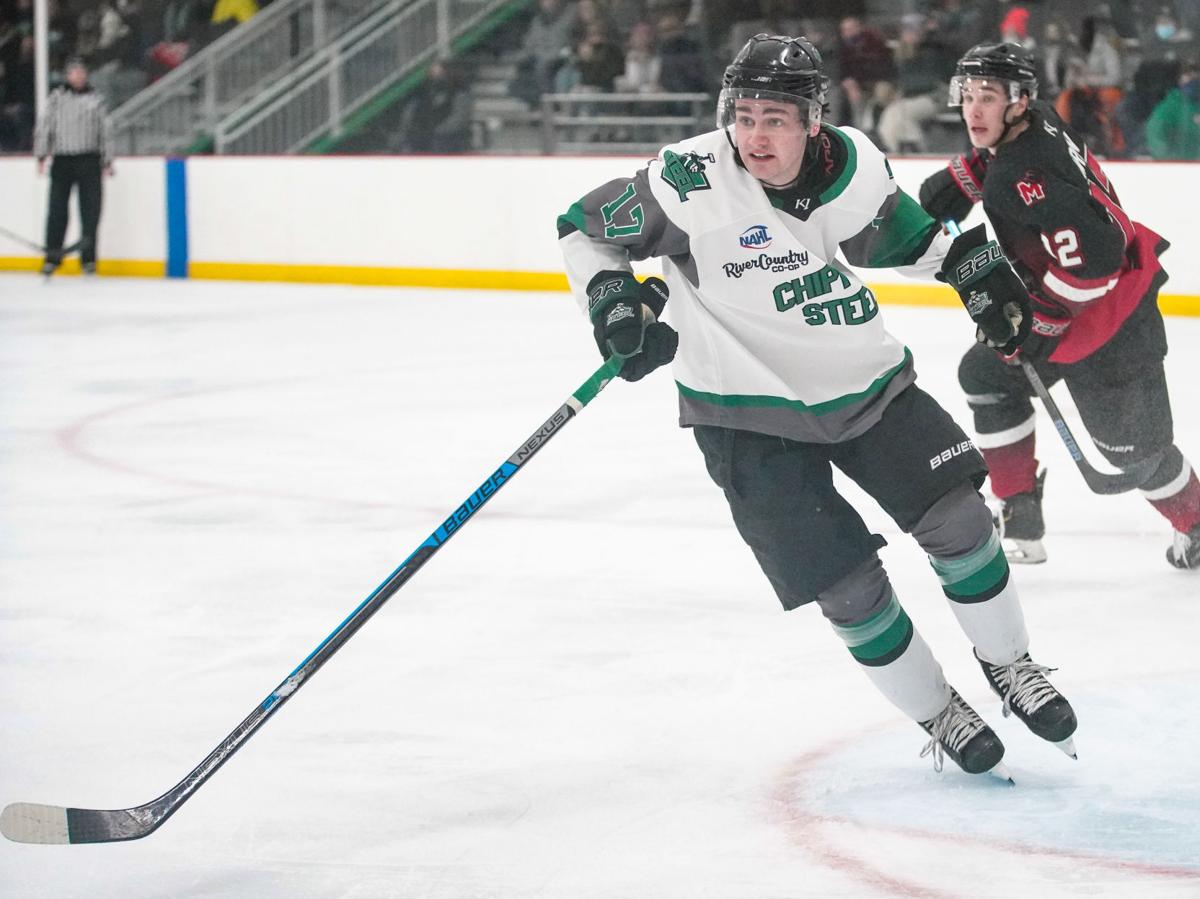 Chippewa Steel's Ryan Waltman skates with the puck during a game against the Minnesota Magicians on Friday, Jan. 1 in Chippewa Falls.

Eau Claire Memorial players gather around quarterback Brice Wingad (12) during a game against DeForest on Saturday at Carson Park.

Chippewa Steel's Ryan Waltman skates with the puck during a game against the Minnesota Magicians on Friday, Jan. 1 in Chippewa Falls.

Both Eau Claire Memorial and Eau Claire North’s football teams suffered losses over the weekend, but late scores for each squad left the teams with positives to take away from their Week 4 matchups.

Eau Claire Memorial dropped a 35-12 contest to 2019 Division 3 state champion DeForest Saturday at Carson Park, a decent finish for the Old Abes considering the talent of their foe and the Norskies’ quick start. DeForest scored on each of the team’s first four possessions and went into the break up 35-0 after a pick-six.

From there, the Memorial defense stood tall, and a pair of touchdowns in the final quarter cut the deficit to a respectable margin.

“In my four years here that’s the best team that we’ve played,” Memorial coach Mike Sinz said. “They’re big, fast and physical. We knew that coming in and I think we were shellshocked at first. I think you could see that. Just the speed and the strength that they showed early on.

“With that said, at halftime we talked about how we need to raise our level to DeForest’s level. I was happy with how we came out and played. ... We were able to get a push up front. Defensively we were flying around making plays. That kind of shows what we’re capable of. I wish we had played like that in the first half.”

The defense got Memorial on the board first when the group took advantage of a DeForest mistake. Trevin Kison snagged a wide snap and ran the ball back 70 yards to the house with 7:53 remaining in the game.

Junior quarterback Tyson Allen, who replaced starter Brice Wingad late, ran nine yards for a score in the final minute to get the offense in on the action. The Old Abes dropped to 1-3.

The Huskies also put together a pair of late touchdowns Friday night at Carson in a 42-21 loss to La Crosse Central. QB Kyle Greenlund found Tyson Harvey for a six-yard TD pass with 4:50 remaining in the fourth quarter, while Wilmor Amor returned an errant snap 10 yards to the house just over a minute later.

But the RiverHawks, led by dual-threat QB Mason Herlitzke, remained undefeated on the season. He passed for 125 yards and ran for 109.

“When the kids do what they’re coached to do during the week, things turn out pretty well,” North coach Andy Jarzynski said. “When they freelance or they lose mental focus, you end up with breakdowns. I told the kids tonight, when we watch this film, when they watch it this weekend, both of those will become extremely obvious.”

Remy Rassbach had the most electric play of the night for North, rushing 63 yards for the team’s first touchdown.

“Nothing beats a long run,” Jarzynski said. “That was great. I’ve got headphones on, so I can’t hear anything hardly, but boy, I could even hear the fans. That’s the kind of stuff that gets the kids energized and it gets the fans energized as well.”

North, still looking for its first win of the season, will travel to Holmen Friday. Memorial hosts Green Bay Notre Dame Saturday. Both teams are now more than halfway through their alternative fall seasons.

The Chippewa Steel announced sweeping changes to its organization Friday.

The Steel, a junior hockey team playing in the North American Hockey League, announced new owners have taken over the club and named a new head coach.

Former owner Steve Black, who brought the Steel to Chippewa Falls in 2018, agreed to transfer ownership to Kasik Hockey, LLC, the organization said in a press release. The new owners will be keeping the Steel in town, announcing a lease extension at Chippewa Area Ice Arena through the 2023-24 season.

Kasik Hockey, LLC is owned by Kelly Kasik and Geoff Stahl, her husband. Kasik has been a real estate investor for the last 16 years. She will run the team, with assistance from Stahl, who has been with Apple for the past 21 years.

“We are so excited about this opportunity to be the new owners of the Chippewa Steel,” Kelly Kasik said in a statement. “We love hockey and are looking forward to growing the organization and supporting these young men achieve their goals on and off the ice. The Chippewa Valley is a fantastic area, and we are so lucky to have your support. We can’t wait to meet everyone!”

Janda served as the Director of Coaches and Development Coordinator for the San Jose Jr. Sharks for the last nine years. As a player, he played in the NAHL and at the Division I level with the Rochester Institute of Technology, where he reached the NCAA Frozen Four.

Kasik Hockey, LLC will also assume ownership for the New Ulm Steel in the NA3HL.

“I want to thank Steve Black for his years of dedication to our leagues. He impacted hundreds of players’ lives, giving them an opportunity to succeed, and was able to build and grow teams that were successful on the ice and in the community,” NAHL Commissioner and President Mark Frankenfeld said in a statement. “I look forward to working with Kelly and Geoff and am excited to see what they have in store in the future for the Steel.”

The WIAA Board of Control approved the 11-player football conference realignment solution initiated by the Conference Realignment Task Force Committee on Friday, finalizing a plan that moves River Falls back to the Big Rivers and Rice Lake out from the BRC and into the Middle Border.

River Falls was previously moved out of the Big Rivers and into the Mississippi Valley for 2020 as part of a state-wide football-only conference realignment plan, though they still played a BRC schedule last fall amid the coronavirus pandemic. Rice Lake is set to be the largest school in the Middle Border at a 703-student enrollment. Ellsworth ranks second in the conference with 509.

The new conference alignment goes into effect for the 2022 football season.