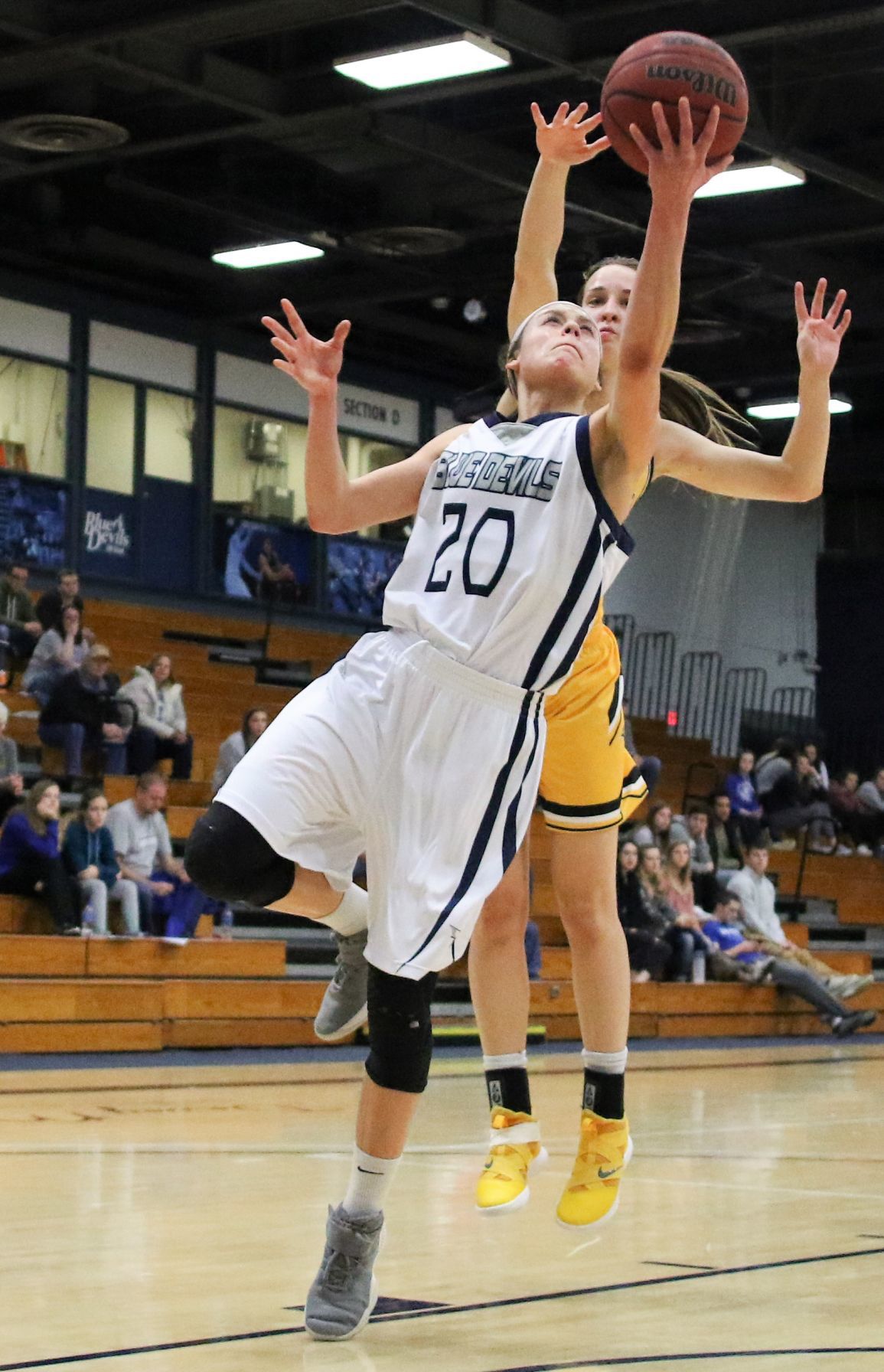 UW-Stout’s Bailey Diersen takes a shot against UW-Oshkosh on Feb. 3 at Johnson Fieldhouse in Menomonie. 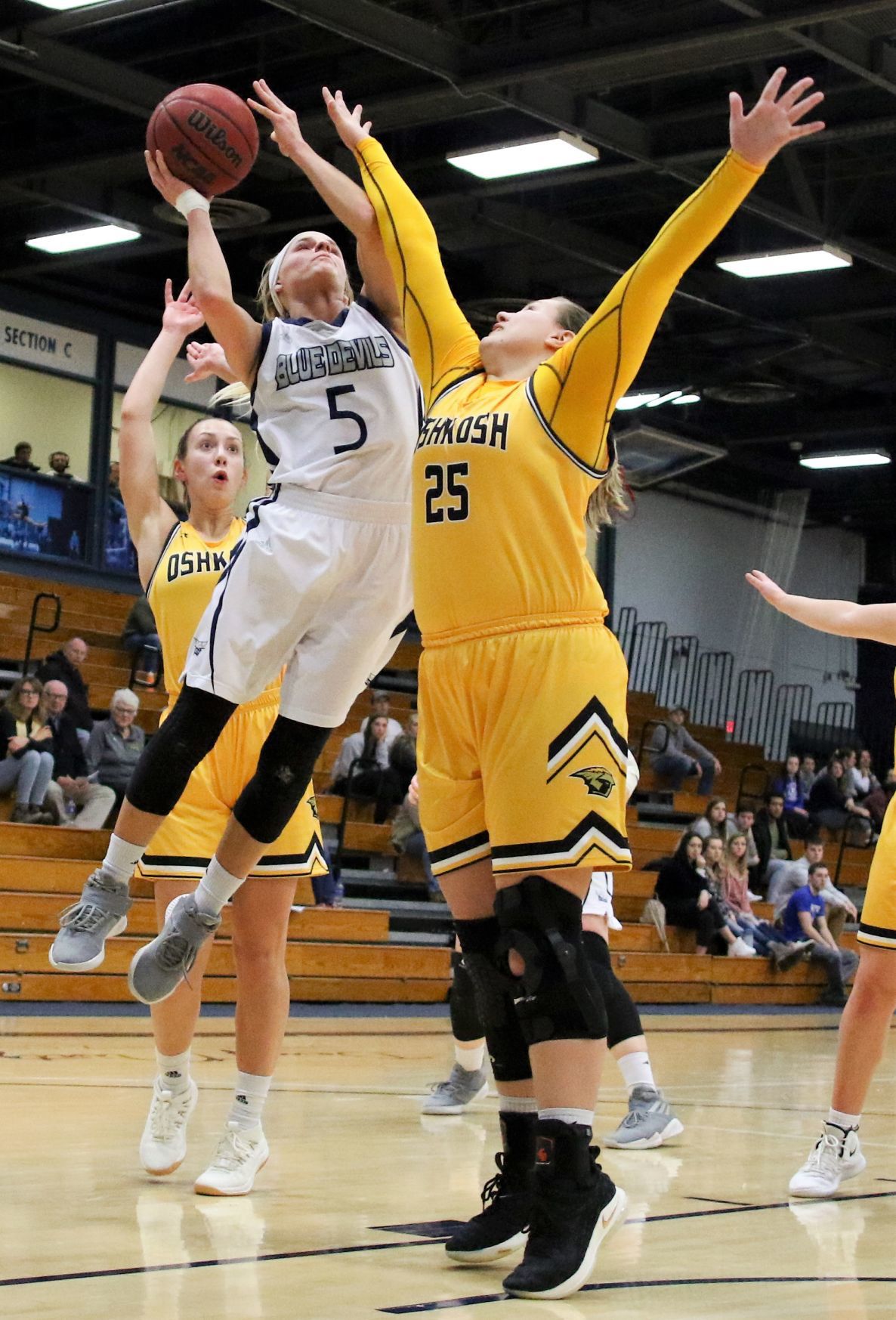 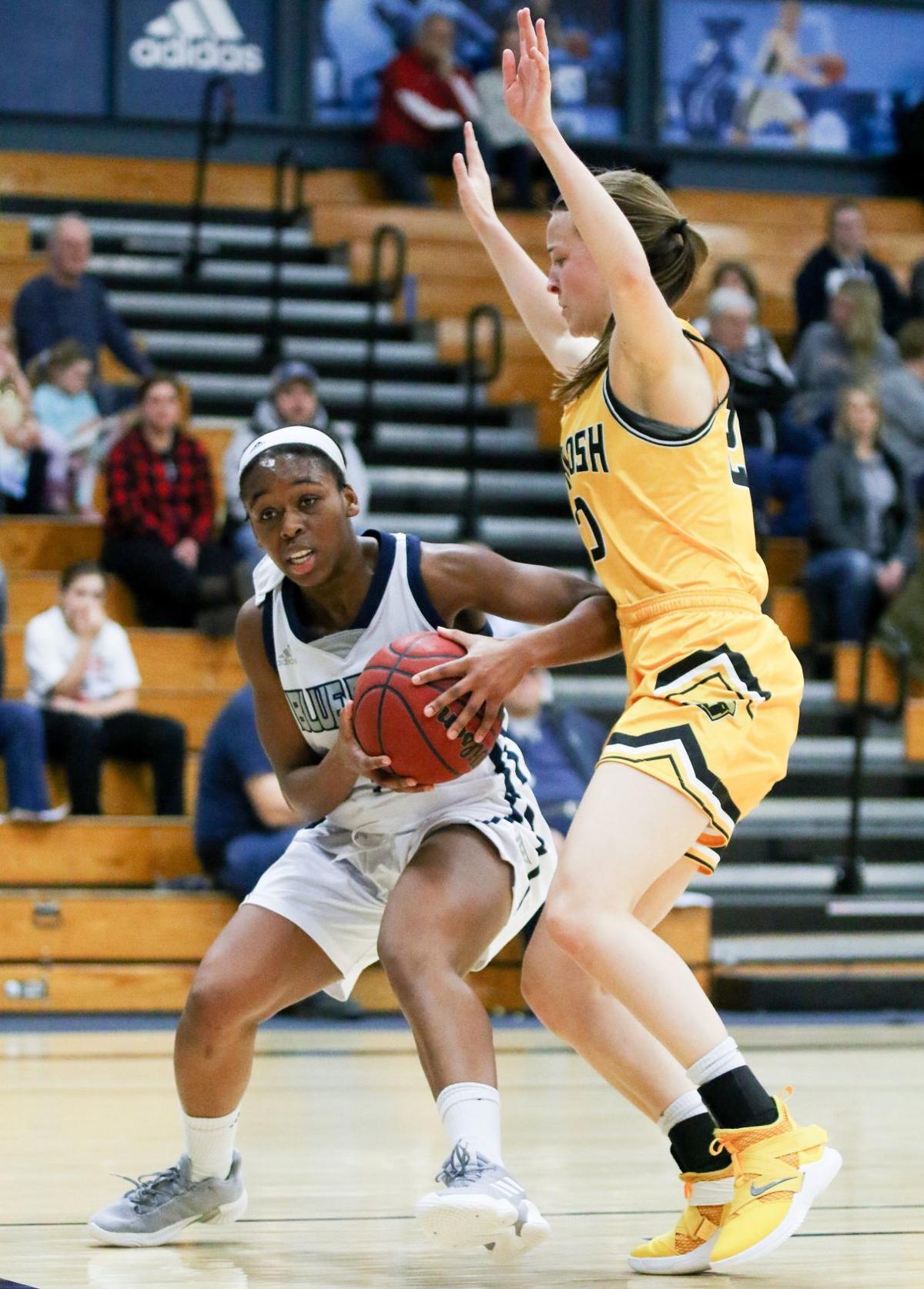 UW-Stout’s Shannan Watkins looks for space on Saturday at Johnson Fieldhouse in Menomonie. 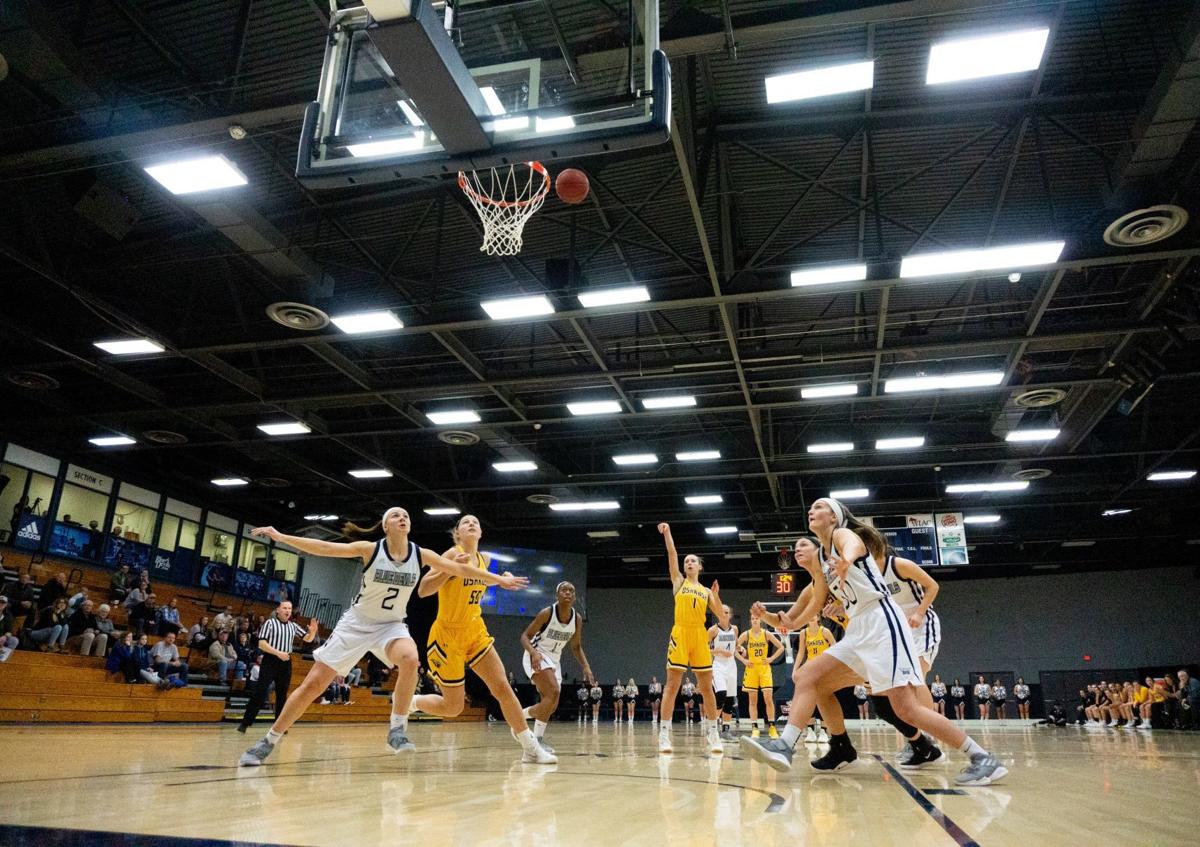 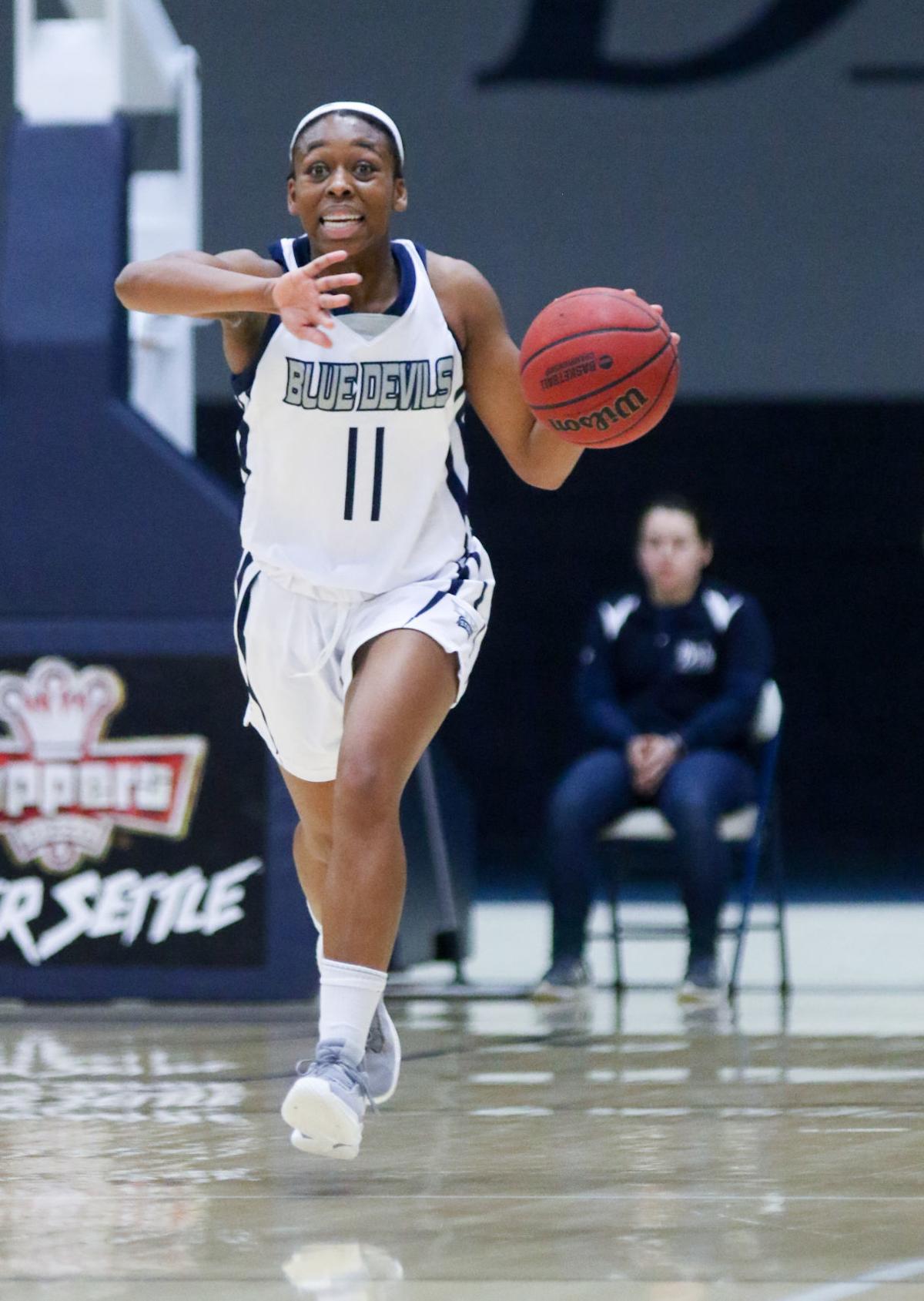 UW-Stout’s Shannan Watkins brings the ball up the court against UW-Oshkosh on Saturday at Johnson Fieldhouse in Menomonie.

UW-Stout’s Bailey Diersen takes a shot against UW-Oshkosh on Feb. 3 at Johnson Fieldhouse in Menomonie.

UW-Stout’s Shannan Watkins looks for space on Saturday at Johnson Fieldhouse in Menomonie.

UW-Stout’s Shannan Watkins brings the ball up the court against UW-Oshkosh on Saturday at Johnson Fieldhouse in Menomonie.

MENOMONIE — UW-Stout nearly climbed its way out, but the hole the Blue Devils dug themselves was simply too deep to escape.

The Blue Devils made only two of their 15 attempts from the field in the second quarter, giving them a deficit that not even a fourth-quarter surge could overcome. UW-Oshkosh, which held a 14-point lead entering the final quarter, held off Stout for an 81-67 win at Johnson Fieldhouse on Saturday.

Stout trimmed the 12th-ranked Titans’ lead to five with just under four minutes remaining, but Oshkosh pulled away thanks to several second-chance baskets and a strong defensive effort down the stretch.

“They’re a great basketball team, so if you’re not going to play 40 minutes of basketball, the score’s probably going to be in their favor,” Stout coach Hannah Iverson said. “The big thing was us executing at the end. When we get (the deficit) to five, we need to get it to three. That was our issue, we never closed that gap.”

Down 64-59 late, the Blue Devils got the Titans to miss three times on their ensuing possession to potentially give themselves a chance to cut the lead to one possession. Instead, Oshkosh secured three offensive rebounds which eventually resulted in a basket by Leah Porath, sparking a 17-6 run to close the game.

“It came down to not executing. It’s why we gave up the run at the end,” said Stout’s Bailey Diersen, who scored 16 points.

Stout fell behind with an ice-cold second quarter. The Blue Devils shot at a 13 percent clip in the second, with three of their seven points coming from the free throw line.

“That’s a credit to their defense,” Iverson said of the cold streak. “They played great lockdown defense. They’re really disciplined.”

The game was tied at 19 after the first quarter. The Blue Devils shot the ball well out of the gates, scoring regularly against the vaunted Titans defense which entered the game allowing the third-fewest points per contest in Division III.

Oshkosh allowed an average of 46.1 points per game through its first 19 games, a number they couldn’t hold the Blue Devils to.

“We’ve got some kids that are playmakers for us, and they do it day in, day out,” Iverson said. “They made some plays. We stepped up and hit some big shots that needed to be made, but we just couldn’t fully close that gap.”

Oshkosh was able to pad its lead a bit late in the third quarter. The Titans closed the period on a 9-2 run, and Chloe Pustina hit a 3-pointer at the buzzer to establish a 14-point lead.

But Stout went on an 8-0 run early in the fourth to make a game of it, with Diedrich hitting back-to-back layups to get the Blue Devils going.

There just wasn’t enough left in the tank down the stretch. Stout was held scoreless for over two minutes after cutting the deficit to five.

“We needed to take high percentage shots and work to get shots out of our system,” Diersen said.

A heavy slate is set to continue to chug along for the Blue Devils. Saturday was their second game in three days, and they host UW-Eau Claire in a rivalry game on Wednesday.

“We played Thursday, got a day off, then played again. That’s tough,” Iverson said. “Every night is a dogfight, and that’s what makes this league fun.”