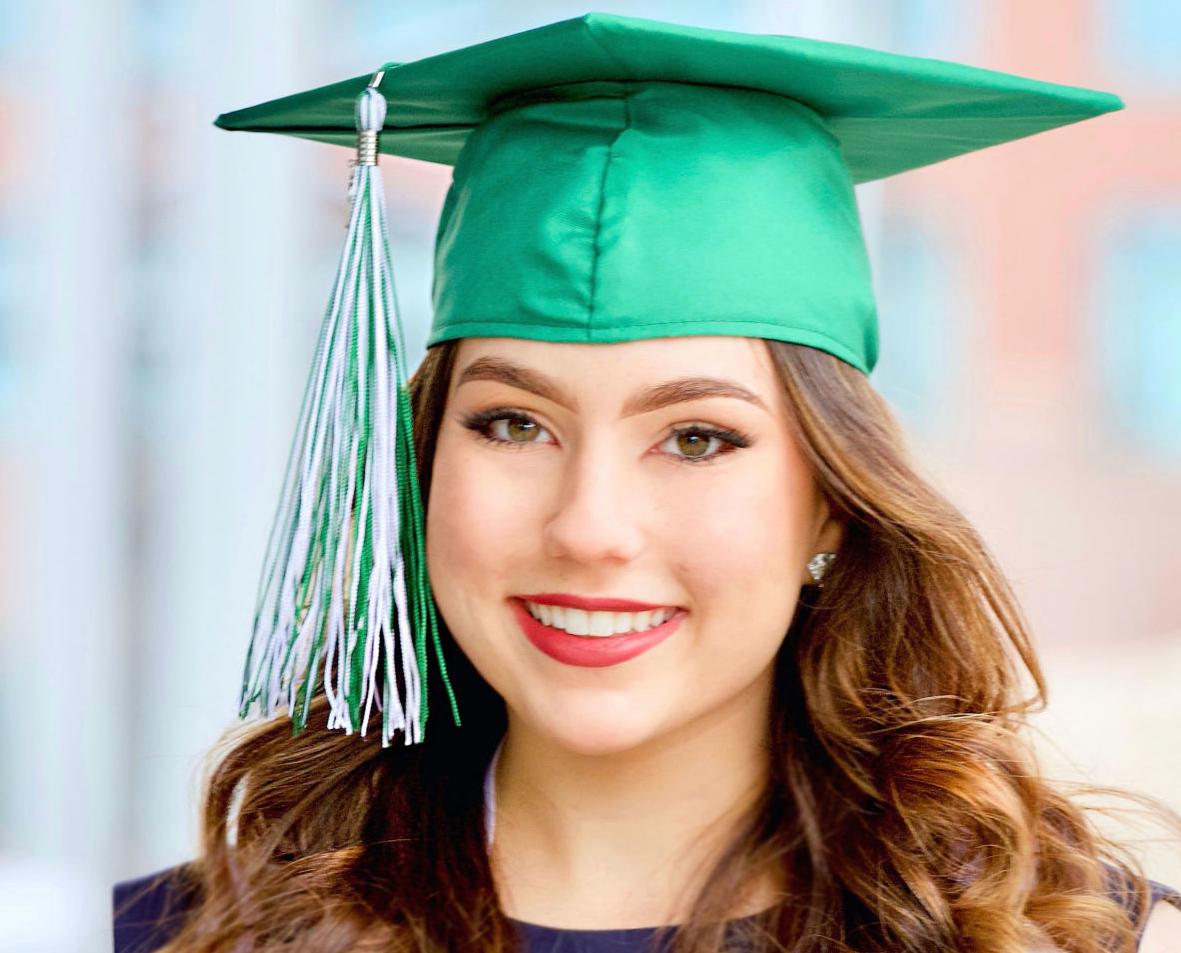 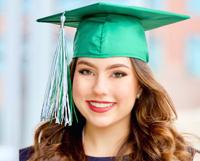 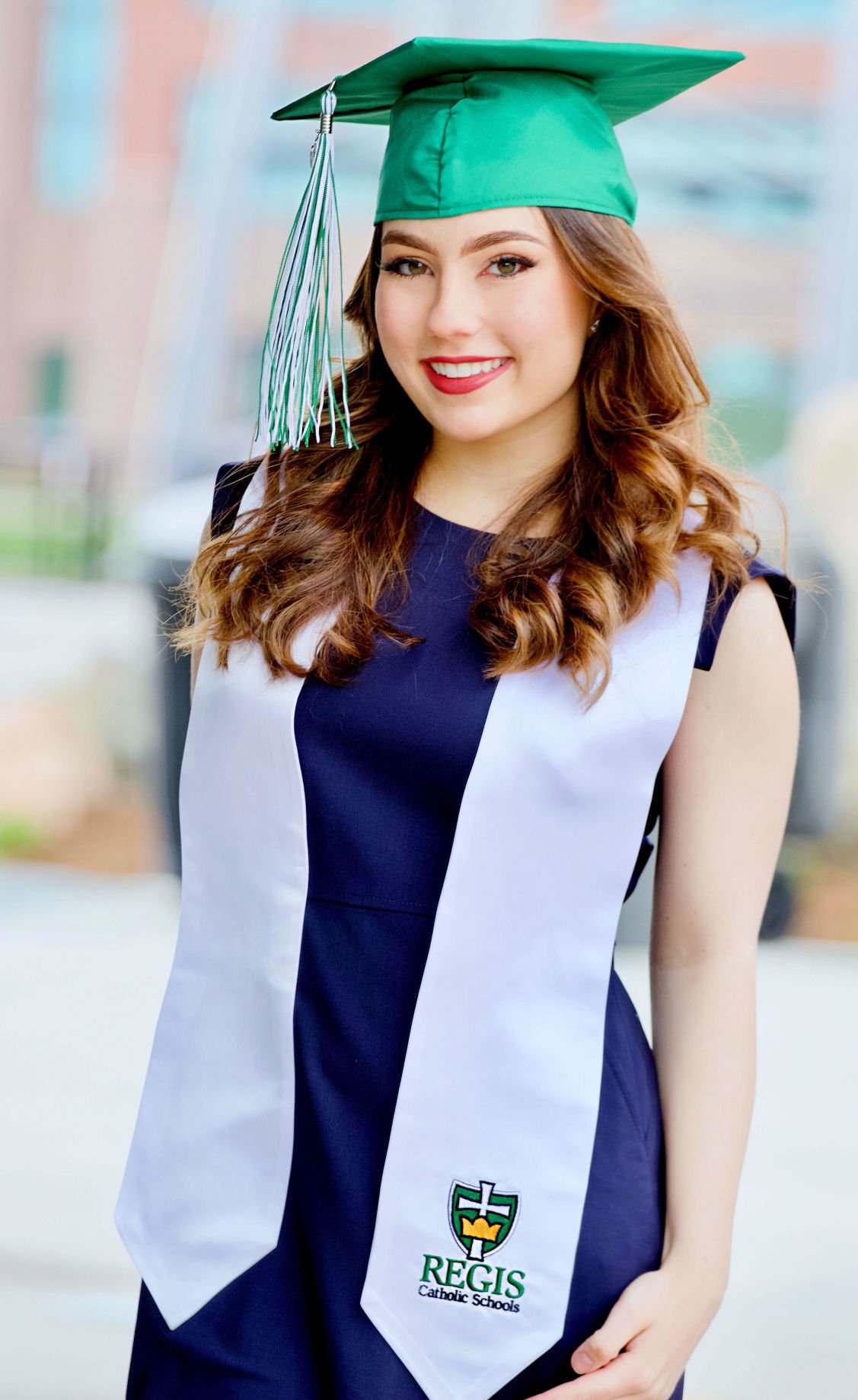 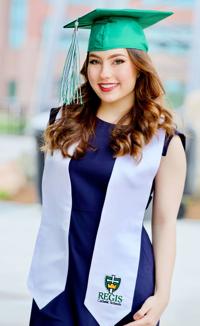 Riley Michaud has lived in six states and owns her own business. And she’s not even a high school graduate ... at least not for another 24 hours or so.

Michaud is a member of Eau Claire Regis’ graduating class of 2020. She was born in Colorado Springs, Colo., lived in Missouri for seven years, relocated to the Chicago area for a short stint, moved to Shreveport, La., and returned to Missouri where she completed middle school and her first two years of high school.

The family relocated to the Chippewa Valley two years ago when Riley’s father, Matt, retired after 24 years in the Air Force. Many might see moving so often during one’s formative years as a detriment; Riley sees it as character-building.

“With every new adventure has come a new learning opportunity,” she said. “In reality, I would not be who I am without those experiences.”

Having visited her grandparents in Chippewa Falls over the years, Riley said Wisconsin “has always felt like home.” That sentiment was reinforced when she became a Rambler. She’ll now be a member of Eau Claire Regis’ 61-student class that’s graduating Wednesday and Thursday.

“I was welcomed with open arms right away,” she said. “It’s been a positive atmosphere ever since.”

Riley has been interested in photography for at least 12 years, as evidenced by a family photo of her with her very first camera at the age of 7. She’s since established her own business, Riley Pictures Life Photography. Portraits dominate the venture’s website, but Riley’s work diversified while serving as Regis’ first student photographer.

“The images she captures truly are of professional quality, and I was grateful to partner with her,” said Meghan Kulig, the school’s communications director. “Riley would capture images at various school and athletic events across the Regis system, providing me with the photos for use on our social media channels and in marketing materials.

“She would even visit our elementary schools if her schedule allowed to capture images there.”

Atop Riley Pictures Life Photography’s Facebook page is the message, “There is always something to smile about.” The phrase aligns with what Riley said is her life mantra. The goal is to “every day wake up with a positive attitude, perform at least one good act and have a moment of insane courage,” said Michaud, who adapted the approach from the messaging at a Christian camp she attended.

That positive outlook — which also earned her the nickname “Smiley Riley” for some — has helped her succeed even at a time of uncertainty due to a pandemic.

“I see a lot of positivity coming out of this — neighbors helping each other, hospitals uniting, schools recognizing students who may not have gotten recognized otherwise,” she said. “Every Friday night football game or eating out with family won’t be taken for granted anymore.”

Michaud considered — and was accepted at — UW-Stout, Johnson & Wales in Rhode Island, College of Charleston in South Carolina and Concordia University in Mequon. She opted for the Menomonie university in part for its strength in an area in which she plans to pursue her bachelor’s degree — hotel, restaurant and tourism management.

“I want to be out there doing something I love,” said Riley, who added that the welcoming community of the Air Force was an early influence.

“We had many meetings and slept in many hotels,” she said. “It was humbling to see these people drop everything and welcome you. I want to be that welcoming face for people coming to town, to make their day a little better.”

Michaud was involved in a ministry team that volunteered at Regis and St. Mary’s Elementary School. She forged friendships through those experiences and as a Pep Club member.

Despite her youth, “mature” is a word others often use to describe Michaud.

“I’m grateful Riley has made Regis her home these past few years,” said Paul Pedersen, Eau Claire Regis principal. “She’s an inspiration to all of us and maybe the most grown up and mature young lady I’ve known.”

Added Kulig: “I can honestly say I have never worked with another high school student who is as mature as Riley is. There is something truly special about her.”

Given social distancing concerns, Riley won’t graduate alongside her classmates. But, thanks to her glass-half-full approach to life, she’s grateful her parents, grandparents, aunt and younger sister, Molly, will be in the room Wednesday as she begins the next chapter of her life.

“I wouldn’t want it any other way; the one consistent thing has been my family,” Riley said in regard to the many schools she’s attended. “They’re my graduating class.”